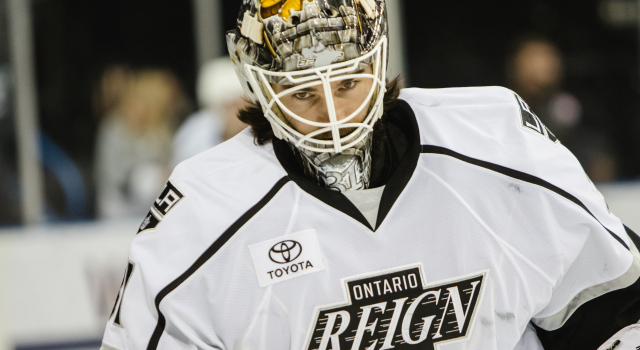 It’s not the ideal spot to be in, but there’s only one way to look at it.

“It’s just a matter of, ‘OK, let’s just approach this as one shift, one period, one game and take it from there,'” Reign head coach Mike Stothers said Thursday morning.

The Reign trail the Lake Erie Monsters three games to none in the Western Conference Finals and are facing elimination in a 4 p.m. PT Game 4 later today at Quicken Loans Arena in Cleveland.

“We know it’s do or die and our backs are against the wall so we’ve got to come out with a lot of urgency and just stick to how we know how to play,” defenseman Jeff Schultz said on Wednesday.

“The mood has been great,” Stothers said. “If you look at the series, it’s not the ideal situation to be in but the first two games we played good enough to maybe come back and win. We certainly had some lapses, but they were basically one-goal games. Game 3 we didn’t look like we had our legs underneath us and I don’t know if that was due to the fact that you’re changing time zones. … It’s tougher to go the direction we went than it is to say come from East to the West. Not using that as an excuse but you’ve got to look at it as for what it is. Two out of those three games I thought we could have, possibly had a victory in those games.”

By contrast, the Reign have outscored the Monsters 4-1 in the third period.

“Right after the anthem, it’s the third period,” Stothers joked when asked of his game plan.

The light mood is the one the Reign are sticking with in the face of their biggest uphill climb of the season. The Reign did not lose four games in a row once in the regular season.

“I’ve liked the demeanor of our team,” Stothers said. “There’s times where you can feel it, maybe some of the energy of some of that life has been sucked out of them but I see the exact opposite. I see still a very confident, yet respectful group of their opponent and the situation that we’re in.

The Reign don’t have to look very far — just above — to see that a 3-0 deficit can be turned in a 4-3 series win. The Kings did it in the first round of the 2014 Stanley Cup Playoffs against San Jose en route to their second championship.

“We’ve got ourselves in a little bit of a situation now but it’s not insurmountable,” Stothers said. “Teams have done it and our organization has done has done it. The Kings were down 3-nothing, came back and won. Anything’s possible.”

Schultz was part of that Kings team that playoff run, but only played in the following two rounds.

As far as AHL history goes, three teams in the league’s existence have come back to win a best-of-7 after losing the first three games: Wilkes-Barre/Scranton defeated Providence in the 2013 Eastern Conference Semifinals, Adirondack defeated Hershey in the 1989 Southern Division Final and Rochester defeated Cleveland in the 1960 AHL Semifinal.

Lake Erie went up three games to none in their last series as well, only to let Grand Rapids creep back in and win the next two. When asked after Tuesday’s Game 3 win if his team learned from that lesson, Monsters head coach Bednar said, “let’s hope so.”

Goalie Peter Budaj was first off the ice at morning skate, as reported by Mark Scheig of The Hockey Writers.

The veteran has started every game for Ontario this postseason and is expected to make this 13th straight playoff start despite being pulled after two periods in Tuesday’s Game 3 after allowing four goals on 21 shots. Budaj has a 2.27 goals against average in the playoffs, but a 4.20 GAA vs. Lake Erie.

ALL THE KINGS MEN PODCAST

Here’s the most recent All The Kings Men Podcast with yours truly and Jesse Cohen, breaking down the Western Conference Finals and the Reign’s 0-3 hole.

Forward Brett Sutter, who played in the last two games after missing seven straight due to injury, will be a game-time decision, Stothers told Sheng Peng of Jewels From the Crown. Sutter was a minus-1 in Games 2 and 3 against Lake Erie and has one assist in five playoff games.