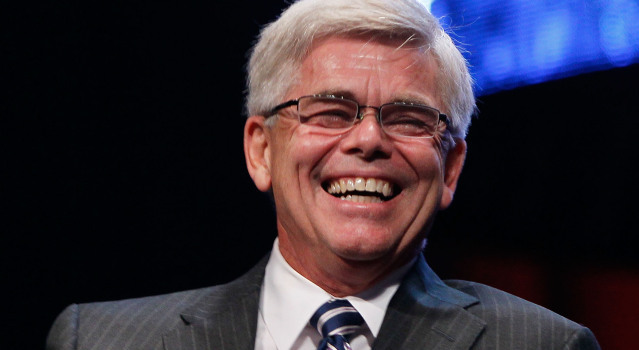 This week I had the chance to chat with AHL president/CEO David Andrews on the many quirks of the AHL including schedules, one-referee systems and his thoughts on the California teams with one regular season now in the books. Below is the Q&A that tackles several different topics:

ORI: Have you been able to take any time to enjoy the playoffs?
Andrews: Hopefully starting now, yes. We’ve been busy with some franchise movement as you know so when you combine the playoffs with some of that … business it’s fairly hectic but at this point I’m hoping to refocus on our semifinals and finals the rest of the way and enjoy it because it is a great time of the year for our league and NHL and the weather’s getting better this way, so it’s all good.

ORI: How satisfied were you with the varied 68- and 76-game schedules and what kind of feedback did you get on it?
Andrews: I think we were satisfied with how it went. It’s something that we would like to address down the road of trying to get to one schedule length for all 30 teams in the future but I know it’s not on the horizon for this coming year and it may be two or three years before we find what the optimum number is for everyone. I think it’s been a topic of conversation more because of how it looks and how odd it is than any real impact on our competition.

ORI: Are there hopes to create partnerships within the regional TV markets like a FOX Sports West to help build the brand?
Andrews: Well, we would love for that to happen. Our experience has been that a lot of our regional television opportunities are driven by the teams themselves as opposed to the league because we really don’t have that national opportunity when you look at where the NHL is with NBC Sports Network and NBC. The amount of hockey on television between the regionals and national network there’s not a lot of windows of opportunity for our league to be looking at national deals, but certainly we’ve had good success with regional networks and a lot of that [comes from] the NHL clubs who are working with their rights holders. I know that they’re having some conversations between a couple of our NHL teams on the West Coast and their regional networks. Certainly we’d love to see that come to fruition.

ORI: There were a high amount of games between California teams. Is there potential for more Central Division crossover games in the future? (Note: The Reign played playoffs opponents San Jose and San Diego 12 times in the regular season and did not face Western Conference Finals opponent Lake Erie once):
Andrews: We’re not really looking at it with respect to the California teams because one of the premises of forming the Pacific Division with the California teams was for them to play each other more often and to limit the amount of travel from a player-development point of view. So, more inter-division play for them is not what they signed up for so I don’t think we’ll be looking to allot more of that. It’s fairly common within our league for teams to play their closer rivals and their divisional opponents probably 10 to 12 times a year and then fill in with opponents from other divisions. I don’t think we’ll see a big change. It’s not uncommon in the American League, certainly this far into the playoffs for a team to play a team they haven’t played during the year even if they are in the same conference.

ORI: What’s the reasoning behind the best-of-5 first-round series considering the NHL and even junior leagues play a best-of-7 in their first rounds?
Andrews: The rationale is we actually run our regular season a week longer than the NHL does and in order to finish at a reasonable time we needed to shorten up our first-round playoff series. That’s why it is the way it is. It’s a question of how late do we want to play and in the regular season we found that we needed that extra week in order to reduce the frequency of games and increase the number of weekend games from a business point of view and that’s worked out well for us. At one time we had an 80-game schedule. We dropped down to a 76-game schedule and lengthened the calendar by a week for business reasons and for hockey reasons. There’s not a lot of push-back from our teams relative to the best-of-5 in the first round and we’ve even thought about going to a best-of-5 in the second round to try and compress the playoffs a little more but that certainly doesn’t have a lot of support. I think the best-of-7 will certainly remain in the second round for sure.

ORI: Select regular season games featured a one-referee system. What’s the reasoning behind that and is there a hope that two-man systems will be featured in every regular season game?
Andrews: I know we’ve been moving towards more and more two-man games over the last number of years. We have a new contract with the NHL, this is the end of our first year of that new contract and that contract does call for us to be a 100 percent two-referee system by the end of the contract. The limiting factor for us getting to a two-referee system isn’t financial, it’s the lack of availability of referees who are capable of working it at our level. Until the system is able to produce sufficient numbers of qualified referees we just can’t get there. It’s been our intention year over year to keep increasing the number of [two-man] games and we have done that. And we do all of the games in the playoffs with the two-referee system, but it’s important that the referees working are qualified and are capable of working at our level. We’re just not there yet in terms of the volume of officials available.

ORI: Now that the first regular season is complete with the addition of the California teams, how satisfied were you with how it panned out?
Andrews: I don’t think we could be any happier with how it played out. We as a league worked very hard to integrate the California teams into the league right from drop of the puck on opening weekend and I think those teams have fit in really well and, from a business point of view, certainly been very successful. San Diego and Ontario particularly [were] in the top five or six teams in the league in ticket sales and revenue generation. Our new team in Winnipeg as well, the Manitoba Moose were returning there, also did tremendously well at the gate. Three of the top six teams in the league were teams that we relocated this past summer. We’re really happy. … I think more importantly … all five NHL general managers who have teams in California are thrilled with the outcome. That’s as important to us almost as the business success because our relationship with our 30 NHL partners is one of the most important sustaining factors of the league. If the NHL GMs are happy with where their affiliates are and the access that they have to them and the player development environment they’re in, that makes our life much better. They’re really pleased and it’s just been great. When you think about where we are now at the end of our 80th anniversary season, we just set a new all-time attendance record. We had a tremendous year from a ticket-sales perspective, we had a great year revenue-wise. The business, the competitive side, was great. We’re close to 90 percent of the players in the NHL this year are AHL graduates and the amount of player movement back-and-forth was significant. More than half of the players in our league played in the NHL this year. It’s been a great year and certainly the business success, if you look at setting new attendance records, is directly attributable to the contributions made by the new clubs. So, I would say it would be pretty difficult to give it anything other than an A+.