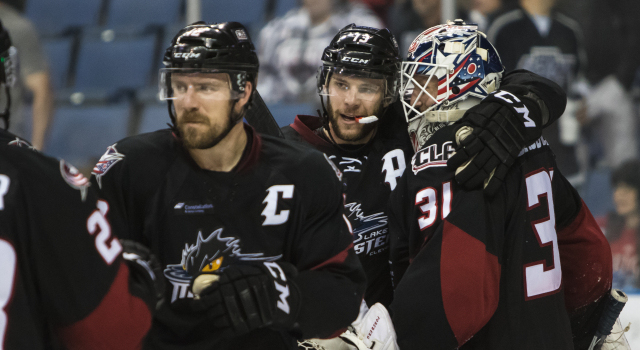 Reign game breakdown
This is not where the Reign expected or imagined they would be in the Western Conference Finals. As the result of a third straight defeat to a Lake Erie team that has simply looked like the better team in the series, the Reign are down three games to none after a 4-0 loss in Game 3 on Tuesday in Cleveland. As the Monsters had in both Games 1 and 2, they used another streaky momentum swing, scoring three goals in a 4:27 span in the first period that left the Reign chasing the rest of the way. This start though was the best the Monsters delivered against the Reign and it started with a goal by Oliver Bjorkstrand at the 6 minute mark. Bjorkstrand bounced off checking attempts by Kurtis MacDermid and Michael Mersch and drove the net, scoring on a backhander that fooled goalie Peter Budaj. The Monsters went up 2-0 on a deflection by Sonny Milano of a Steve Eminger pass from the point 1:50 later and the Reign were quickly falling apart. Josh Anderson then finished a breakaway, beating Budaj glove side at the 10:27 mark to end the flurry, but the damage was done. The Monsters’ transition game has provided fits for Ontario and deficits they have not been able to come back from. In Game 1 is was a three-goal stretch in 2:36 in the second period. In Game 2 it was two goals in 12 seconds in the first period. “We need to stop trying to beat guys one on one or passing into coverage. We are trying to FORCE plays instead of making the right play,” head coach Mike Stothers said via text on Tuesday night using the capital letters himself. While the Reign tried to get back in the game in the second period, they allowed yet another goal, this one by Markus Hannikainen at 16:31 off a rebound, his second goal in as many games. Down 4-0 after two periods, Stothers pulled Budaj, the AHL’s best goalie in the regular season, for just the second time all year after the veteran allowed four goals on 21 shots through 40 minutes. The Reign came into the game outscoring the Monsters 4-1 in third periods in this series, always trailing, always hoping for a comeback. But, this third period finished scoreless as Michael Houser stopped six shots in relief and Anton Forsberg stopped six as well to finish the night with a 26-save shutout. In their previous series against Grand Rapids, the Monsters went up three games to none before allowing the Griffins to creep back into the series and win the next two. “Let’s hope so, let’s hope so,” said head coach Jared Bednar when asked if his team has learned from that mistake, via a postgame video provided by the team. For Ontario, the focus now has to be to just win Thursday’s Game 4 and go from there. “We just keep focusing on us,” said Justin Auger. “It’s about what we do and what we’re giving them. We haven’t played our best hockey yet and if we come out and play our best hockey we’re a confident bunch of guys who know we can come back from this.”

Best quote
Stothers, on which players need to be better: “We all, as a collective group, need to be better and bring more to the table. That is how we got this far this season, every one of us count on each other to be better, and we will.”

Three stars
Oliver Bjorkstrand – The game’s first goal by Bjorkstrand was a mini-highlight of all that’s gone haywire for Ontario. Bjorkstrand grabbed an errant pass by Ontario and came in full speed from the neutral zone and at one point had four Ontario players around him but still managed to get into a scoring area.
Markus Hannikainen – A third-liner, Hannikainen has three points in the last two games and scored on his only shot in the game. Another strength for Lake Erie in this series has been its scoring depth and the high level production it’s received from its third line of Hannikainen, Lukas Sedlak and Bjorkstrand.
Anton Forsberg – Forsberg hadn’t even started a game in these playoffs until this series and as each game has passed he’s provided a better and better performance as noticed in his shutout performance on his own ice. He stopped Brett Sutter on a 2-on-1 glove save early in the first period and by far outperformed his counterparts in a game where the shots were a close 27-26 with Lake Erie having the advantage.

Turning point
Trailing 3-0 in the second period the Reign Justin Auger had a prime chance in tight and then later a puck that crossed the goal line with Mersch and Nic Dowd all over Forsberg was immediately waved off. That was followed by Hannikainen’s goal that gave the Monsters a 4-0 stranglehold.

Stat fact
6-for-6 – The lone bright spot for Ontario was its penalty kill going a perfect 6-for-6.

This and that off-ice
The attendance for the game was 8,823. … Game 4 of this series on Thursday will be broadcast live on FOX Sports Ohio.

Next up
A do-or-die Game 4 for Ontario is on Thursday at 4 p.m. PT at Quicken Loans Arena in Cleveland. If necessary, Game 5 will be on Saturday at 9 a.m. PT, also in Cleveland.