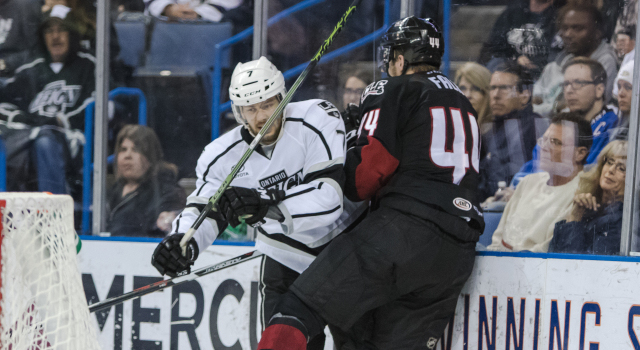 Brett Sutter, on the loss and moving forward:
I think that one’s over and done with. We focus, regroup, realize what we did wrong tomorrow and our focus now is just to win one game.

Sutter, on what went wrong for the Reign:
They were a better team tonight. They played their game plan. We got away from things a little bit, but like I said that one’s over and done with. We refocus. We get ready for our next game. We’ve got a couple days to figure it out and we’re confident we can win that one.

Sutter, on how to stay positive in the face of adversity:
I think here just realize that we’re a real good team. We’re probably not playing the way we need to play. Tomorrow’s a work day, we’re going to be better and like I said, just one game at a time.

Justin Auger, on team’s character now down 3-0:
We’re a team that doesn’t quit. We’re going to battle to the last buzzer and we’ve been that way all year. We’ve still got a lot of confidence in this room and we know what it takes to win and we’re going to come back stronger on Thursday.

Auger, on the mentality of the team after going down three goals early:
There was still 10 minutes left in the first period. We knew we had a lot of time left and take it one shift at a time and just try to chip away and just break their lead down.

Auger, on what needs to be better for Game 4:
We just keep focusing on us. It’s about what we do and what we’re giving them. We haven’t played our best hockey yet and if we come out and play our best hockey we’re a confident bunch of guys who know we can come back from this.

Joel Lowry, on going down early in the game:
They’re a good team, they’re a quick team and they got more pucks behind our D than we did. We had too many turnovers and they capitalized on those. When you get behind the 8 ball against a good team like them it’s tough to come back.

Lowry, on how to stay positive in the face of adversity:
It’s still a seven-game series. I know we didn’t get the result we wanted the first three games but we’ve got to keep plugging away, take it one game at a time and just see what we can do on Thursday and go from there.

Lowry, on what the Reign need to do better:
I think we need to play a full 60 minutes. We still haven’t done that yet. I think you saw it in the third period the first two games, when we play our style and the way we’re capable of playing we’re generating a lot of chances and carrying a lot of the play. We just need to do that for a full 60 and we should have a good chance to win some games.

Note: Quotes via video provided by the Ontario Reign.