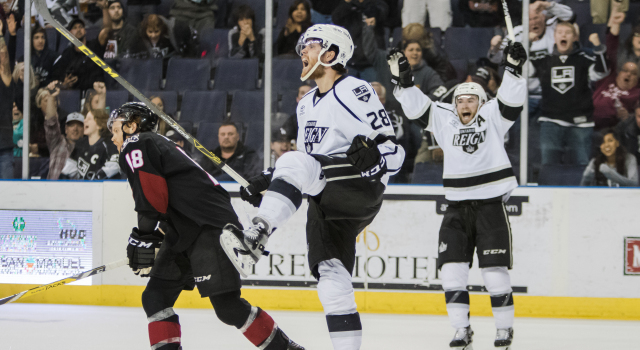 Trailing the Western Conference Finals against Lake Erie two games to none, the Reign aren’t dwelling on what went wrong in Games 1 and 2 last weekend. Instead, they’re remaining positive and keeping things “light,” as assistant captain Sean Backman said in the below video ahead of today’s Game 3 in Cleveland at 4 p.m. PT.

Little went right for the Reign in the opening losses (4-3 and 3-2) on home ice. The common conclusion of what went wrong in both was the Reign feeling they failed to play a full 60 minutes and play their defensive style that has previously given them success.

“We’ve got to play a full 60 minutes,” head coach Mike Stothers told the Reign’s communications head Joey Zakrzewski this morning. “I don’t think they’ve seen the best of us yet. I think they’ve seen it in stretches or maybe spurts. But I’d like to see how they react if they see truly how the Reign can play for say the first 20, followed by the second 20, followed by the third 20. I like the approach of our guys right now, the mindset. Everybody feels good. Everybody’s light, happy, in a good mood, focused and ready to go. We’ll see how it takes us here tonight.”

Added Paul Bissonnette on Sunday: “I guess we’re kind of in a position where we haven’t really been all year. We talked about it after the game. We’re going to remain positive and we have a bit of an uphill climb here but we have a good morale in there and we’re excited to go on the road and try to steal a few.”

This core group for Ontario that won last year’s Calder Cup has not trailed a series down two at the start.

“We’re going to have to find a different way to win this one,” Michael Mersch said Sunday.

A key focus for Ontario will trying to slow down Lake Erie’s overall speed and momentum after they score. In Game 1 the Monsters scored three goals in a 2:36 span in the second period and in Game 2 had two goals 12 seconds apart in the first period.

“We’ve just got to keep them off the transition and bore them to death,” Bissonnette said Sunday. “Go north and when we’ve done that we’ve had success.”

The Reign have only outscored the Monsters in the third period, 4-1.

–Goalie Peter Budaj gave up a combined 7 goals in Games 1 and 2, an amount he never surrendered in back-to-back games in the regular season. His save percentage for the series is .870 and tonight he’s expected to start his 12th straight playoff game.

“We lose sight of the fact that because he’s an older guy and he’s a veteran that he’s got a wealth of playoff experience. He doesn’t,” said Stothers on Sunday. “So, he’s going through it, too. We wouldn’t even be here without Budes. Budes has been great and he’s put us where we are. But you still need to score more goals than the opposition.”

Budaj, a former NHL netminder who won the AHL’s goalie of the year award, won his first pro playoff game in this year’s playoffs.

The Monsters have been countering with the solid play of goalie Anton Forsberg, who won last weekend in his first two playoff starts of the postseason. Aaron Portzline of The Columbus Dispatch writes here about how his patience is now paying off.

–Center Nic Dowd is leading the series for the Reign with one goal and two assists. The Monsters’ are led by the play of captain Ryan Craig, who has four points (1-3=4).

–Today’s game will be available via online stream on theAHL.com (there is a cost involved) and as always, available on internet radio.

–Lake Erie’s T.J. Tynan spoke today on his team’s speed and success on the power play:

"Anytime we can come in here and win games is gonna be huge for us." – T.J. Tynan on The Q.#BattleTogetherhttps://t.co/nTl455dTQb