Sutters at the Memorial Cup; catching up with Kings video 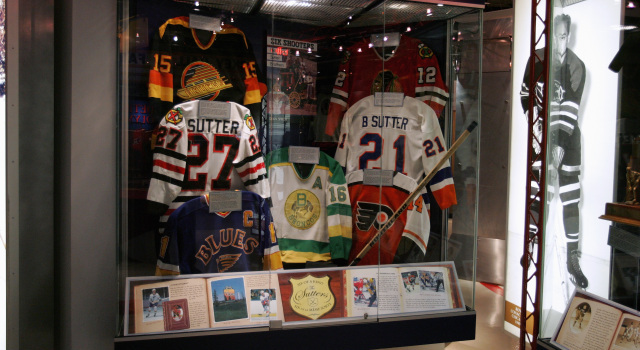 Darryl Sutter and his brothers have been in Red Deer, Alberta, where the Brent Sutter-owned/managed/coached Red Deer Rebels are 1-1 through their first two games of the Memorial Cup. On Sunday, the Sutter family was recognized by the Western Hockey League as Commissioner Ron Robison presented Darryl, Brian, Duane, Brent, Rich and Ron with the WHL Milestone Award. Sadly, the video provided by the league isn’t embeddable; you’ll have to click the link.

Darryl Sutter played one full season in the WHL, totaling 81 points in 68 games for the Lethbridge Broncos (the team has since returned to Swift Current, Saskatchewan) in 1977-78. After being selected by the Chicago Blackhawks in the 11th round of the 1978 draft, he spent the 1978-79 season playing professionally in Japan, a time I look forward to learning more about with Darryl next season and sharing with you as part of a feature on LAKings.com.

If you recall back to the halcyon days of the spring of 2015, you may remember that Kings prospect Matt Mistele won the Memorial Cup with the Oshawa Generals. No Los Angeles prospects are currently playing for Brandon (WHL champion), London (OHL champion), Rouyn-Noranda (QMJHL champion) or Red Deer (host team) in this year’s tournament.

Over at LAKings.com, the top 20 moments of the 2015-16 season are being chronicled as part of a recurring video series. Here are moments 20-15: