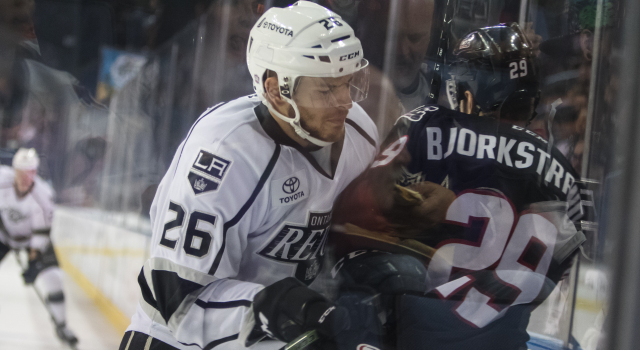 On if the Reign can draw positives from not yet playing a full 60 minutes this series:
I think that’s exactly it. I think we played in spurts. As a matter of fact we were just talking about that in the coaches office. That’s a good team and I readily admit that’s a good team. I don’t think they’ve seen as good as we can be as consistently as we can be. We’ve showed it in spurts. It’s a one-goal game and I’m proud of the fact that we were behind and we never gave up. Pretty easy to, some teams would probably just mail it in after 3-0 after two. Not us. So, I like that. Shows a lot of character on our team but we need to play that for a full 60. Maybe going on the road will be exactly what we are looking for. We’ve been a good road team, too. There’s all kinds of positives you can pull out of it and we will continue to do so.

On if going on the road helps simplify the game:
That’s usually the mindset but really our home and road record has been pretty close to being the same. We try not to change anything anyway. We approach everything the same way. Home, road, no big deal. Win, loss, no big deal. You’ve got to get the next one. I don’t foresee that changing at all. That’s been our MO all year.

On being down 2-0 for the first time as a group, even dating back to last year’s run:
Well, you’ve done your homework because that’s exactly what we talked about. This is a new experience. We’ve never experienced this at all. Even with the success we had last year, we never lost a Game 1 in a playoff series. We’ve never been behind in a playoff series. It’s part of the process of being in the American Hockey League. Part of the process of learning how to be a good NHL player. Part of the process of winning a championship. Sometimes you’re going to face some adversity. Sometimes you’re going to face some hard times.

On Adrian Kempe’s chance late in Game 1 mirroring another great chance for Michael Mersch late in this game:
You guys are good tonight. You guys are really good tonight. Because yeah, we talked about that. I’m thinking to myself on the bench, I’m going, ‘My God, if I could pick a guy that I would want to have standing in front of the net with a puck tonight it’s Mike Mersch.’ So, yeah. They didn’t go in. They made good plays. We had some good looks. That’s just the way it goes. But yeah, when you talk about it, when you want situations when you draw it up and you get in those, no better guys to have in those situations. Maybe we should have had Biss in there. He found a way to get it to go in.

On Lake Erie’s ability to score quick goals and how to stop it:
We talk about it but again until you live it and do it. We’ve had some situations this year where we’ve had a quick response after a goal or whatever. That’s what good teams do. Lake Erie’s a good team. I take nothing away from them. It’s a good matchup. Also when you look at the previous series when we were against San Diego, we won the first two but it could have been very easily 1-1. Maybe even if you’re looking at it from their side they probably thought they could have won the first two. That’s the way the playoffs go. It’s been that close.

On Paul Bissonnette’s goal:
Everybody’s got to contribute, you’ve got to get some goals from your line that goes out fourth. It was a good rush, good entry, Newbs has the puck, a little dish to Biss going to the net. He just had his stick on the ice and redirected it. Yeah, that’s huge. That’s what you want to do. When you get into the playoffs you’re not going to win the whole thing if you just rely on one line. Again, I like to reference Lake Erie. You look at their team and they’ve gotten this far by four lines contributing. Again, you look at their lines tonight and you put their points to playoff points or whatever beside it — some pretty good balance there. That’s what you need.

On Paul LaDue’s AHL debut:
Well, there’s never an easy situation when you’re coming in and you’re playing your first game and it happens to be a playoff game. In an ideal world it would have been great if he had been able to join us at the end of the year when we played those two games in San Diego and we had, I can’t even remember how many rookies in the game. It would have been nice, but we didn’t have that luxury. Realizing our opponent and how well they skate and how good they are at laying pucks in and now our defense have to go back and pick up a puck and there’s not a whole lot of time, why wouldn’t you want a guy that can skate as well as LaDue? I think we saw some of that tonight. I wasn’t expecting miracles from him. But he’s shown enough in practice with us that he can get around the ice and he can move the puck. I thought the start for him was real strong. Again, you go back to the fact that he hasn’t played in a long time. You kind of start hearing and it kind of drops off, the energy level. Maybe it will make him even stronger if he’s in the lineup on Tuesday.

On the play of goalie Peter Budaj:
Playoff experience for Budes is, this is new to him, too. We lose sight of the fact that because he’s an older guy and he’s a veteran that he’s got a wealth of playoff experience. He doesn’t. So, he’s going through it, too. We wouldn’t even be here without Budes. Budes has been great and he’s put us where we are. But you still need to score more goals than the opposition. You look at tonight and we get a goal from Biss and we get a goal from Gravs. Not what you would probably would have predicted coming into tonight’s game. So, again, guys have to step up, guys do. Guys are doing the best they can. I look at the situation and go, ‘OK, it’s 3-nothing,’ all a sudden they get a 2-on-1 break. Budes makes a huge save. That’s what he does for us. You look at his work in the third period and there’s a competitor in there and there’s a beast in there that just will not be denied. It’s a good feeling as coach when you know you’ve got a wall back there like that. Very thankful, very fortunate that we’ve got Budes and we’re here because of him.

On the players talking about there being a lack of consistent urgency:
I didn’t say that so I’ve got no answer for that.