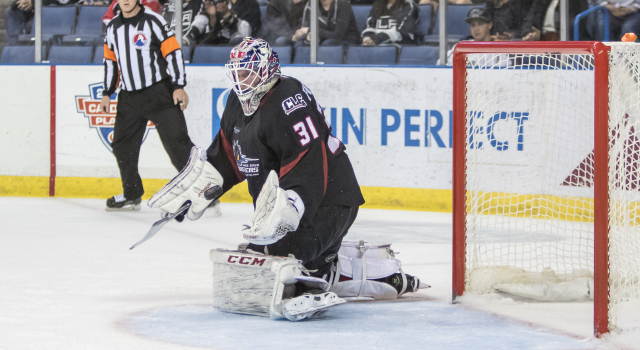 On his overall thoughts of the game:
It was a close game. Obviously it comes right down the final buzzer, you get the goalie out. I think that second period lull that we had hurt us obviously but I like the fact that we battled back. We came out hard in the third. When you play a team for the first time, you watch all kinds of video on them but when you have a chance to watch them live it’s a quick team, a fast team. So, I liked the fact that we came back.

On what happened in the second period lull:
We scored first, which geez, you should win when you score first you think? [Sighs] Anyway, we had a lull. It cost us.

On Lake Erie’s speed:
The start of the second period I think each and every line that went out, the four that were dressed, turned the puck over in the neutral zone and we ended up going back in our end. I guess that’s what makes a team look fast. If you’re going to turn it over and have them go right back on ya and get odd-man situations then you get what you deserve. We get a puck in deep, I think it was Dowder who got one in deep around the 14-minute mark and we spent a great amount of time in the offensive zone. That’s what you want to do. This team is, if you think to teams that we play regularly, it’s Texas. There was one night here against Texas where they looked fast, they looked everything else because we kept turning pucks and we refused to get it deep. When we got it deep we had some success, we got our forecheck going. We’re a team that likes to get in and forecheck. We’re not a team that likes to retreat. We did it to ourselves.

On what he would say to Adrian Kempe after hitting the post in the final minute:
Good job, kid. What else are you gonna say? It was a great play from Amadio and it was to the guy you wanted. It was Kempe. Everything was perfect except it hit the post. It didn’t hit the post and go in, it hit the post and went back out. That’s another thing I draw a lot of positives from. We had the goalie out, we had some real good chances, we had some real good looks. Again, it’s a situation where ideally you’d like to win every game you play, but when you’re into the final four, it’s four good teams. Nothing’s going to be easy. Nothing worth winning is easy.

On Adrian Kempe’s performance:
He was good. Put him back in the middle and let him free-wheel a little bit, seemed to help him. He’s been very good for us in the playoffs. I go back to the fact [on the hit post] that if you draw that up, that’s the guy you want right now with the way the playoffs can gone. He did everything … he hit the post for crying out loud. Nothing to say to him other than good job and we’ll get them tomorrow.

On the ice conditions after graduations being held in the building before puck drop:
I wasn’t on it. I have no idea. I didn’t put my skates on today so I have no idea what it was like. I would imagine it was the same for both teams.

On Joel Lowry’s goal:
He’s actually had a pretty good playoff. Scored a couple nice goals against San Diego for us, too. Kid does a good job. Plays hard, plays big, plays physical. Has got a pretty lethal shot. Very underrated. He’s still finding his way but he’s come up with some real big goals for us. He might be a big-game player as well.

On Lake Erie’s passing and speed:
That’s how they generate some speed from underneath. They come up the ice, they drop it to the guys coming underneath with speed. I thought they did a real good job of head-manning the puck. Somebody was open ahead of them, they moved it. We were guilty in the second period of carrying it. We stopped moving our feet, looked to see, ‘OK, who am I going to pass it to?’ Then take a couple more steps. I don’t care how fast you can skate, you can’t outskate the puck. If somebody’s open ahead of you, give it to them and then jump back into the play. That’s pretty much what they do. That Werenski, he head-mans the puck and continues up and jumps into the play. It’s a pretty effective way to play.

On if Lake Erie did anything that surprised him:
No, but it is different seeing it live. It’s very much different seeing it live. Watching it on TV or watching it on video is great but you don’t see the speed, you don’t feel the intensity of the game. I think they did a good job on us and I thought we did a pretty good job on them. So, we just need to execute a little bit better.