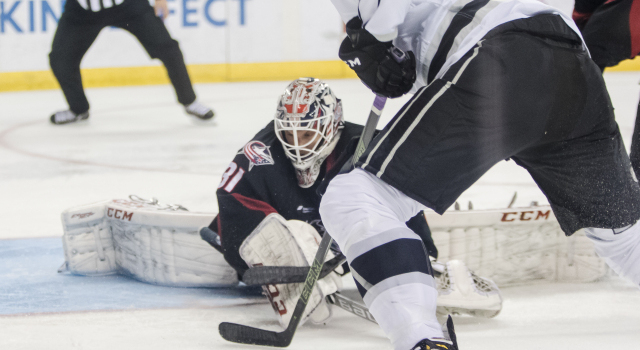 Michael Mersch, on the lack of consistency in the Reign’s play:
We’re a good team. We’ve been a good team all year and we’re going to keep pushing forward here. We’ve lost two games in a row before and we’ve been a resilient team so we’re going to focus on what’s ahead of us.

Mersch, on being down 2-0 in the series:
It’s definitely new. We haven’t been down 2-0 in a series before. So, it’s a good learning experience. We’re going to have to find a different way to win this one.

Mersch, on the strong finish for a second straight game and if that brings optimism:
Optimistic for sure because that stuff can be cleaned up. We have a good team. We’re all really close with each other on and off the ice so we’re going to pull together and find a way to do this thing.

Mersch, on positives he can take away from the losses being so close:
I think we just have to keep pushing forward. Some tough lulls that when we clean up we’re going to have success. Just got to clean them up and go from there.

Mersch, on if winning last year helps in moments like these:
Yeah. You’ve got to find ways to stay even-keeled and just put everything behind you and keep going here. We weren’t down 2-0 in a series so this is new for everybody. But that’s exciting because there’s a good opportunity for us to learn how to win a different way.

Mersch, on where he was shooting for on final chance on Anton Forsberg:
Five hole. I scored one recently like that five hole so I figured I’d go with it again. Goalie made a good save, he’s a good goaltender. Probably going to be thinking about that one a little bit but it was a good save by the goalie.

Paul Bissonnette, on falling behind early and chasing again in the third period:
I don’t necessarily think we’ve played bad, it just seems that they’ve been very opportunistic, especially early in games. It seems like every Grade A chance they get’s in the back of our net. It’s good to see our will and compete level battling back, it’s just a little tough against teams, especially when you’re in the final four. Typically those types of teams know how to play in those situations and it’s kind of tough playing behind the 8 ball.

Bissonnette, on there being a lack of urgency in the Reign’s play:
I don’t necessarily think our starts have been terrible. If there’s one or two letdowns it just seems it’s been in the back of our net. Yesterday I think we were outshooting them in the first period. They play a different style than we’ve seen all year. Similar to Texas but I think they’re back end’s a lot better and they have a good team. We’ve just got to keep them off the transition and bore them to death. Go north and when we’ve done that we’ve had success. That’s where all our low-to-highs have came from and at the net and getting greasy ones.

Bissonnette, on the need to get to the net:
The common theme we were talking about before the series was just we’ve just got to wear them down, play Kings hockey. That’s been kind of their MO and the way they’ve developed their team. When we’ve done that we’ve had great success. You saw it tonight for most of the part when we did that we really hemmed them in and we had success.

Bissonnette, on the too-little-too-late theme in both games:
I guess we’re kind of in a position where we haven’t really been all year. We talked about it after the game. We’re going to remain positive and we have a bit of an uphill climb here but we have a good morale in there and we’re excited to go on the road and try to steal a few.

Bissonnette, on what he said to his teammates after his goal:
We talked about it even between periods that they’ve blown a few leads. They blew a 4-1 lead against Grand Rapids. They’ve done it a few times so we just said let’s get one and they’ll tighten up and sure enough, they did a little bit. Just came out a little short.

Jeff Schultz, on the team not being able to get on track until the third in both games:
I don’t know. It’s that urgency that we have in the third that we need to bring to the start of the game. It starts with us older guys getting everybody ready for the game and coming out hard. I think our first periods have been good and then we kind of have some back play or whatever in the second. The thing that’s killing us is when we do score they seem to come out that next shift and score and take all that momentum from us. That’s something that we’ve really got to bear down on.

Schultz, on what Lake Erie is doing well:
They’re a quick team and they get the pucks in the right position when they dump it in and retrieve it well. They have a really good cycle. They’re quick. They know where their guys are. They cycle it once or twice and get it out to the slot for a shot and then crash the net and we have a hard time picking up the rebound or picking up guys.

Schultz, on facing adversity and what needs to be better:
Come out like we did in the third period. Play like our backs are against the wall and try to take it to them. When we do take it to them it’s shown that we can score when we need to and it really kind of puts them on their heels and that’s the way we know we can play.

Schultz, on Paul LaDue’s debut:
I thought Paul did great for his first professional game. I’m sure he had some nerves but he moved the puck well, he skated well. I’m sure there was butterflies but I thought overall he had a pretty solid game. [Reporter: Is that more of a responsibility on you then as his partner to help guide him through some of those rough spots?] I told him just go out there and play your game. I didn’t know much about him or kind of the style of play that he did but he got up in the play when the opportunity was there and he got pucks to the net and created some offense for us.