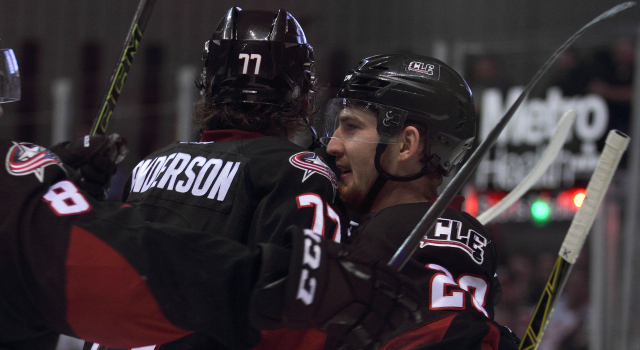 If you haven’t spent time in video sessions prepping for the Monsters, don’t worry, we have a guest contributor to help. Mark Scheig is on the Lake Erie Monsters beat for the Hockey Writers and he also covers the Columbus Blue Jackets and the OHL’s Erie Otters. His site, Thehockeywriters.com, has over 120 writers covering all 30 NHL teams, with coverage expanding worldwide to other leagues.

We touched base this week and I did a Q&A with him as a “Get to Know the Lake Erie Monsters,” considering the fact that the Reign and their Western Conference Finals opponent did not meet once in the regular season.

Big thanks to Mark for helping give us insight on the Monsters and please follow him on Twitter @thwmark.

ORI: How would you describe the team’s system and what has made them successful this postseason?
MS: The Monsters are almost a mirror image of the Reign in terms of the style and system they like to play. The Monsters are a defense-first team. They emphasize fast, aggressive play in all three zones, while sending a heavy forecheck at the opposition. They pride themselves on outworking you every shift. Defensively, the Monsters like to pressure the puck every chance they get. Every play is contested. They turn this into offense by creating turnovers and playing a fast transition game. Once they get settled in the zone, they depend on possession and winning battles to create scoring chances. The reason this has worked for them is two-fold. First, they have good defensive depth 1-6, especially since the arrival of Zach Werenski. His presence allows the other players to play the roles they’re comfortable with. Second, Lake Erie’s goaltending has stepped up all season, especially in the playoffs. The tandem of Joonas Korpisalo and Anton Forsberg has staked the Monsters to a combined 7-2 playoff record, with Forsberg shutting the door on Grand Rapids in Game 6. Both have seen time in the NHL, and are not phased by the pressure of the playoffs. Each are capable of stealing wins for the Monsters. And we haven’t even mentioned the skilled forwards they have, led by former first rounders Kerby Rychel and Sonny Milano. This is a team that can beat you in a variety of ways, whether it’s a track meet or a defensive struggle. Strap on the work boots when you play the Monsters, because it will be a very hard hitting, physical series.

ORI: There’s been a lot of attention on Werenski. What is it about him that has allowed him to easily transition to the pro game and what can you tell us about him that we don’t see on the stat sheet?
MS: Werenski’s hockey IQ and maturity have stood out as why he’s made such an easy transition to the pro game. Playing at Michigan helped him get ready for this moment. For someone who is still only 18 years old, he thinks and plays the game as someone who is 22 or 23. He consistently played against older competition, and usually had his way. But his willingness and desire to improve everyday makes him look like a seasoned veteran. At Michigan, Werenski played one side of the ice. With Lake Erie, they ask him to play the man. Normally a hard transition, Werenski made a quick adjustment to his style and has adapted to the team’s system. He’s a quick learner who constantly strives to get better every day. He does so many things big and small that don’t show up on the sheet. He can cover large sketches of ice, which can allow him or his D-partner to pinch. If a play breaks down, Werenski is usually in position to cover the mistake. His breakout passing is something that’s very impressive as well. He finds the forward in stride to start the attack with ease. When the Monsters are on top of their game, they own the puck. Werenski knows how to get the puck to the right spot to keep possession. And he’s fast for a big man. He outraced Griffins speedster Andreas Athanasiou to a puck in open ice. You won’t see that in the stats, but it’s just as important to his team’s success.

ORI: What happened with the goaltending in the last series and do you see it being a controversy for this series moving forward?
MS: That’s a really good question. Everything was smooth sailing up 3-0 in games and 4-1 in the second period of Game 4. Then, in a flash, the Griffins scored four unanswered and extended the series. Korpisalo started both Games 5 and 6, but was pulled in both games. It wasn’t all his fault. There were times in those games where the Monsters fell asleep at the wheel and let Grand Rapids do whatever they wanted. But the fact that Korpisalo had three bad games in a row does make you wonder how they’ll come out in Game 1. If I had to venture a guess, I’d think they’d stay with the hot hand and start Anton Forsberg in Game 1 [against Ontario]. He shut the Griffins out in the rest of Game 6, which allowed the Monsters to complete the comeback. It’s worth noting that Korpisalo played 31 NHL games this season. Is he fatigued now that it’s May? The Monsters are confident in both netminders no matter who starts Game 1. If they decide to start Korpisalo, don’t be surprised to see a much shorter than normal leash.