Clear skies for Kempe as he turns playoff switch 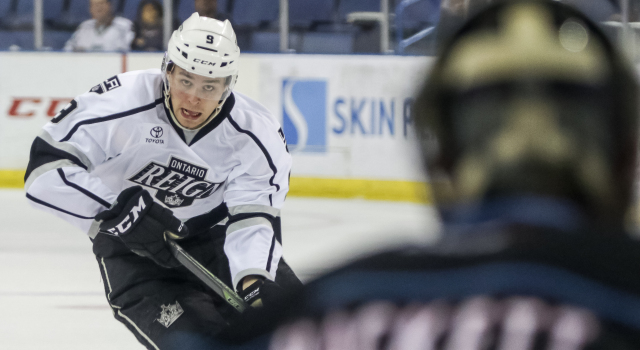 Mike Stothers has been waiting.

The Reign’s head coach has been waiting all season for these moments, to see the best Adrian Kempe has to offer.

And there were times during the regular season when the 19-year-old had to hear it from Stothers:

“I want this guy to be the dominant player that he can be.”

“It’s now time to start proving that you’re a legitimate NHL prospect and be the best player on the ice.”

“As good as he is in the other team’s end, we need him to be that good in our end.”

“Be a guy that everybody’s talking about when they leave the building.”

As the seasons changed from regular to postseason, it’s been all clear skies now for Kempe.

“It’s always motivating when the coach is on you, you have to be better,” said Kempe, who won’t turn 20 until September. “I knew by myself I had to be better, too. I didn’t play good enough. I just try to be better at practice, stay out a little longer and I think after a while I started to play better and now before the playoffs I think I had a good run, too.

“Just trying to keep my game up.”

All that tough love from Stothers was from knowing deep down what the 6-foot-1 forward could bring. Knowing that Kempe provided top notch black ace cards in scoring 8 goals in 17 playoff games just a year ago, helping the then-Manchester squad win it all.

“That’s exactly why,” Stothers said earlier this week. “That’s the guy you see every day at practice. And now we’re seeing it on the ice in the games where it matters the most.”

And that’s, once again, in the postseason, where Kempe leads the Reign with four goals in nine games. The Reign have endured two series against San Jose and San Diego to advance to the Western Conference Finals of the Calder Cup Playoffs and will host Game 1 on Saturday night against Lake Erie.

It’s not an unfamiliar sight now to see a confident Kempe, the Kings’ first round pick in 2014, gliding through all three zones with the puck on his stick, maneuvering through one opposing player and another.

“He’s a good player,” linemate Michael Mersch said. “He’s always been a good skater and good stickhandler. He’s just really bearing down and using his speed and beating guys wide and maybe taking a little bump and going right through it and getting to the net. Little stuff like that that makes a big difference in the playoffs.”

Kempe did much of that in Game 4 against San Diego, scoring two goals in an eventual come-from-behind overtime victory last Friday. “He’s got a great shot and he’s somebody that the opposition has to be aware of,” Stothers said of Kempe after the Reign took a three-games-to-one lead in the Pacific Division Finals.

The very next night the Reign closed out the Gulls, holding on for a 2-1 victory. Stothers, unsolicited by the media, went on and on about Kempe then, too.

“You guys should be talking to Kempe tonight,” Stothers said. “He had multiple examples that we showed between periods to the whole team of him angling guys off and even finishing a check on a guy like [Nick] Ritchie. … I mean, there’s a guy that’s not known for his physical play, but that’s what it takes for a team to have success, and maybe that’s what it takes to have that four-one series win – guys stepping out of their comfort zone and playing hard and doing things that they don’t normally do, and I think that kid was unreal.”

It’s an opportunity to get some minds with the parent club thinking.

“It shouldn’t be that hard for a young guy to figure out, when you’re that talented, the way you need to play to not only be contributing here with us but hopefully opening the eyes up top,” Stothers said. “I don’t think [the Kings are] making it any secret in the fact that they’re going to make some changes. They want to get some younger blood up there and they’re pretty much here every game. If you’re Adrian Kempe, why wouldn’t you want to show them what you’ve got?”

But early in the season it wasn’t all there. Kempe went on an 8-game hiatus from the AHL while playing for his native Sweden in his final World Junior Championships. When he returned he showed immediate promise by scoring in his first game back. That was followed by worrisome stretch of 17 straight games without a goal spanning from January to February.

“I had a tough [time] when I got back from World Juniors, I had a couple tough games,” Kempe said.

Then, the playoff switch.

“I’ve bounced back now and you’re always hungry for playoffs,” he said. “That’s the funnest thing of the whole season. I try to step up my game here for the playoffs and try to make the team better.”

It’s come down to applying himself, as Stothers noted teenagers everywhere struggle with. Kempe dazzled in moments of the regular season, but lacked the consistency that his coach was searching for. And maybe for good reason. Even Stothers admits that when he’s not in the heat of the moment.

“I think he’s even enjoying the success he’s having, and why wouldn’t he? It’s fun.” Stothers said. “When you can play like he can, it’s great. You’ve got to keep in mind, too, it’s a long year. This guy’s a long way from home. A long way from family. And it becomes a long, arduous year. … You’ve got to try and think of what they’re going through and the training they go through all summer, the World Juniors.

“Maybe he’s excited about making the Kings, goes through training camp, doesn’t. Maybe it affects ya. There is still, although he’s very good with the language, there’s a little bit of a language barrier. … It’s a whole different thing. So, myself, I lose sight of that and I have to step back and go, ‘OK, what’s this kid going through? What are they all going through?’ And then you can kind of say, ‘OK, maybe it makes a little sense.'”

“But, it doesn’t mean I’m going to stop pushing because I know exactly what’s there,” Stothers added. “We’re seeing what this kid can offer and it’s pretty special.

“If he needs a kick in the pants every once in a while from me, I’m more than willing to do it.”