May 19: Reign vs. Monsters WCF notebook 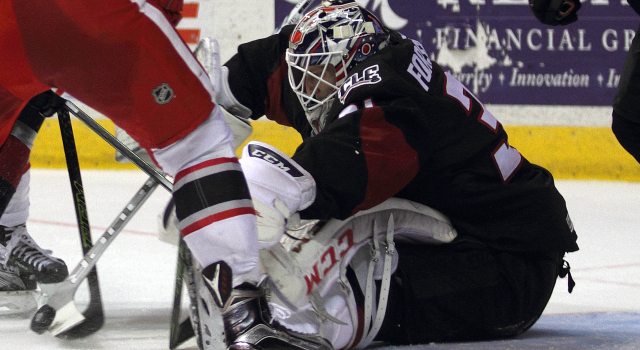 We’re just a few days away from Game 1 of the Western Conference Finals between the Reign and Lake Erie Monsters on Saturday. Here’s some notes on the series for today and there will be a lot more coming in the next few days.

–This is by far the best insight we are getting from the Lake Erie perspective today, courtesy of Aaron Portzline of The Columbus Dispatch. It delves into what the Monsters think of the Reign’s system, Peter Budaj and the Reign’s defense, and more on the Monsters’ own goaltending …

–Who will tend goal for Lake Erie is a hot topic, considering the team did go with Joonas Korpisalo for the early part of the postseason. After his team went up three games to none in its last series against Grand Rapids, Korpisalo dropped two in a row and eventually was pulled in Game 6 in favor of Anton Forsberg.

“I know who we’re going with,” Monsters head coach Jared Bednar told The Columbus Dispatch on Wednesday. “But I’m not ready to tell you yet.”

Reign head coach Mike Stothers said on Wednesday that the team is wisely preparing for either.

“We always prepare for both and I think those guys both played during the regular season,” Stothers said. “I don’t know if it’s a controversy or not. It’s not for me to decide. Their coach has obviously done a good job to get them where they are and he knows their players better than I do and he’ll pick whoever he thinks is the right one to start and they’ll go from there. It’s a good thing when you can make a goalie change and get the result that you’re looking for.”

–The Monsters are traveling today to California:

–For Reign fans in Los Angeles and beyond, there’s a great offer to get from Staples Center to Citizens Business Bank Arena for Game 1:

–Eighteen-year-old defenseman Zach Werenski leads the Monsters with four goals and six assists in nine playoff games. He’s obviously highly regarded by the Columbus Blue Jackets, Lake Erie’s parent club. Here’s a video the Blue Jackets tweeted out today about why their scouts were so high on him:

–Game 4 of this series next Thursday at 4 p.m. PT will be televised live on FOX Sports Ohio.