May 16: All eyes on Lake Erie-Grand Rapids Game 6 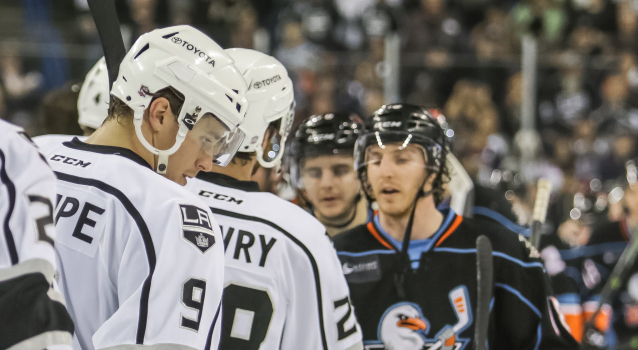 The Reign defeated the San Diego Gulls in back-to-back games over the weekend to win the Pacific Division Finals by four games to one. They won in overtime on Friday in San Diego, and then at home to clinch the series the following day.

The focus now shifts to who the Reign will play next, either the Lake Erie Monsters or the Grand Rapids Griffins, two teams that the Reign have not faced this season. At one point Lake Erie was winning the Central Division Finals three games to none, but Grand Rapids has made a series of it, winning Games 4 and 5. Game 6 is today at 4 p.m. PT at Grand Rapids.

We already know that the Reign will have home-ice advantage in the 2-3-2-formatted Western Conference Finals. Their home schedule has already been released and is as follows:

Here are a few links and videos from the Monsters and Griffins previewing tonight’s Game 6. The game will be live streamed via TheAHL.com on their AHL Live stream (with a cost) and on the radio.

Rychel revved up during Monsters’ playoff run, courtesy of BlueJackets.com
—

Here’s a detailed preview from the Lake Erie perspective, with audio from both their head coach Jared Bednar and more.

And below is the Griffins’ video preview:

Should Grand Rapids tie the series tonight, Game 7 will be held on Wednesday at the Columbus Blue Jackets’ Nationwide Arena due to scheduling conflicts at at Lake Erie’s home arena, Quicken Loans. The conflict? Oh, just LeBron James and the Cavaliers.