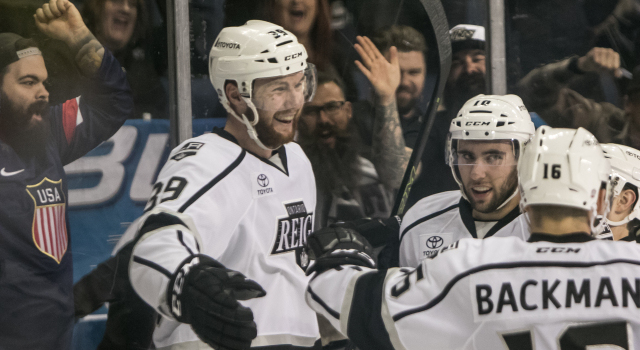 Reign game breakdown
Presented with the opportunity to close out their rival San Diego Gulls, the Reign delivered. They did not swing and miss when going for the knockout blow, benefiting from a lesson learned after a lackluster loss suffered a weekend ago. Instead, they outplayed the Gulls for nearly all 60 minutes and used goals by Justin Auger and Joel Lowry and, despite making it a bit interesting at the end, hung on for a 2-1 victory on Saturday night on home ice. Ontario bounced their SoCal rival out of the playoffs in the second round, winning the series four games to one to advance to the Western Conference finals, which will begin next weekend. After a tight-checking first period that saw the Reign outshoot the Gulls 8-2, all the scoring was left for the middle frame. Lowry scored 2:33 into the second period as he took an errant clearing attempt by Gulls goalie Matt Hackett into his body and buried it into a vacant net with Hackett stuck behind it. San Diego evened the score less than six minutes later on a Chris Wagner shot from the high slot that got through Reign goalie Peter Budaj. Then it was Justin Auger who put the Reign back in the lead a quick 25 seconds later, opting to shoot from the left wing on a 2-on-1 with Sean Backman and sneaking the puck under Hackett’s glove. “We took advantage of our opportunities … and when we had a chance to put the puck in the net we made sure we were doing it,” Auger said. His game-winner came on his 22nd birthday just a night after the Reign took Game 4 on Mike Amadio’s overtime winner on his 20th birthday. The Reign came out on top on Friday 4-3 in San Diego, winning in overtime just as they had on the front end of last weekend’s back-to-back in Game 2 of this series. But last weekend that second game of the consecutive contests came with the Reign looking completely out of sync in a 3-0 defeat. They were keen to not make the same mistake twice, especially with the opportunity to close out the Gulls in Game 5. “We had a situation last week where we had a back-to-back game and we were at home, and we weren’t very good,” head coach Mike Stothers said. “Like, we weren’t very good at all. And as painful as maybe that was, I think we learned from it. There was a different, I don’t know, demeanor around the room, or there was just a quiet confidence today different than say last time. Maybe that’s good for us. When things happen too easily for you, then you just think you’ve got to work. To win in the playoffs, you’ve got to work.” They went to work all right, outshooting the Gulls 26-16 and suffocating their opposition’s power play by going 4-for-4 on the penalty kill to improve to 27-for-29 this postseason. The biggest penalty kill of all though came in the final minutes. Sean Backman tripped Gulls defender Shea Theodore in the San Diego zone with 1:09 to play and the Gulls were presented with a prime chance for a comeback, skating 6-on-4 with Hackett pulled. Budaj, who finished with 15 saves, stopped Brandon Montour point blank in the final frantic minute and as the final seconds ticked off both Nic Dowd and Michael Mersch came up with consecutive shot blocks to preserve the win. “Well, we were good, and we had to make it interesting with about a minute-nine left,” Stothers said of the penalty kill. “Backs asked me after the game if I needed a defibrillator, so it’s good to see that he had his sense of humor. But our guys have worked hard at that all season long. Sometimes it’s your power play, sometimes it’s your penalty kill. You’ve got to have success with both, and I think our guys have done a great job all season long, so I couldn’t be more proud of them.” 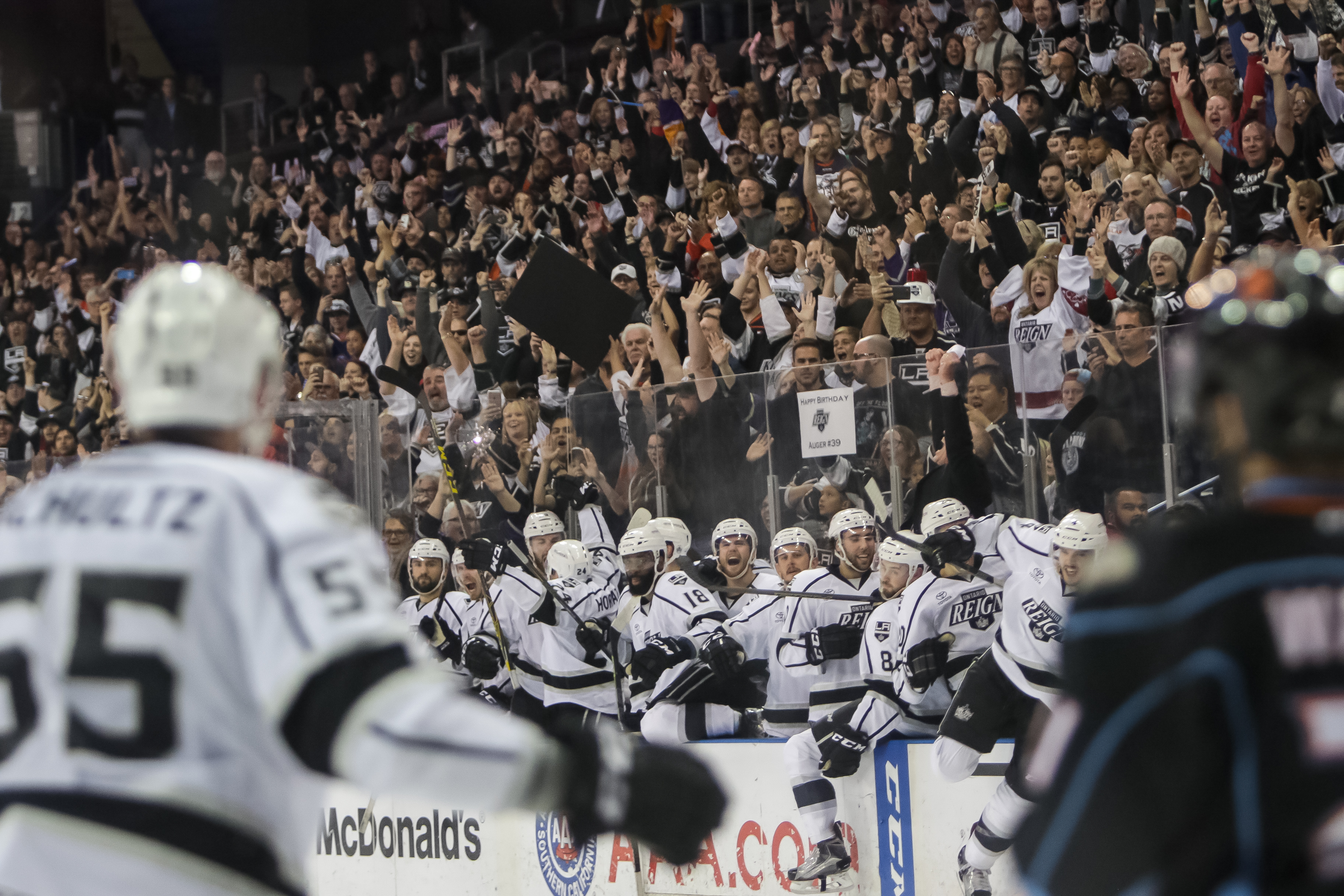 Best quote
Stothers, on the confidence to close out the game late: “Our guys were unbelievable on the bench. ‘We’re killing this off.’ You don’t say it without dropping a few F-bombs, but you know what I mean? Because we’ve been through it, it’s not that hard to handle. You try to just stay low-key, calm, professional.”

Three stars
–Justin Auger – Stothers has wanted the 6-foot-7 Auger to treat these playoffs as his coming out party and his third goal of the postseason was his second game-winner in this series. Auger also scored the overtime winner in Game 2, off a rebound. A fourth-round pick by the Kings in 2013, Auger plays a hard, heavy game and as the series wore on the Gulls looked exhausted. “We weren’t sure how long the series was going to go and we were prepared for anything and like I said before we took advantage of our opportunities and we came to play every night,” Auger said.
–Joel Lowry – Maybe it was a fortunate break on his goal, but the overall picture showed that the Reign’s forecheck haunted the Gulls. The rookie Lowry hunted down the puck as Hackett tried to play it from behind his own net and instead of clearing it out of harm’s way, Lowry brought it down and fired it into the empty net. In this series, it was the most glaring error from either side and San Diego paid for it. A night ago Lowry was slotted on the Reign’s top line to start, but was back at home with the fourth-line grinders like Paul Bissonnette for Game 5 and came through in a big way.
–Peter Budaj – The 33-year-old has quietly done in the postseason what he did for the Reign all regular season: provide a steady performance and give his team a chance to win. Dowd called him the difference in the series by saying, “All the way till the end with 10 seconds left the guy’s making huge saves, cool as a cucumber.” The amount of saves he had to make was not vast, but the focus he had to close out the game was obviously noticed by his teammates. Added Auger: “Every game’s been a low-scoring game and Budes has stood on his head for us a couple times.” In the series, Budaj finished with a 1.89 goals against average. 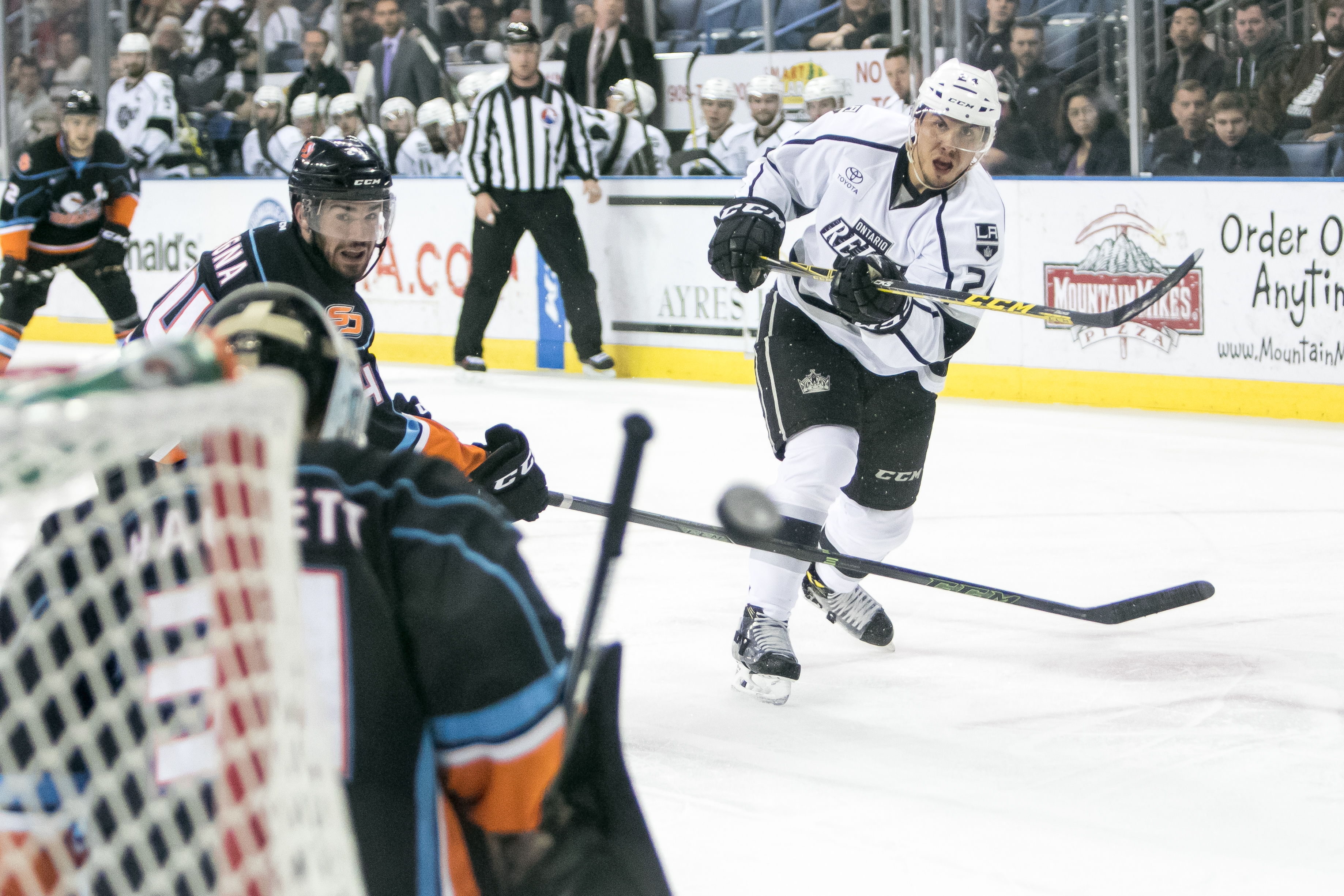 Turning point
San Diego fought back into the contest on Wagner’s mark that came just after the Reign had a chance of their own on the other end, a Kevin Gravel shot from the left point that left a juicy rebound that none of his teammates could get to. Instead, Wagner scored on the next rush to tie the game. But as San Diego coach Dallas Eakins told the Mighty 1090-AM earlier this week — the series would come down to “will,” and the Reign imposed theirs on Auger’s go-ahead goal just 25 seconds later to quickly get their home crowd’s attention.

Lineups and injuries
Gulls defenseman Stu Bickel was out of the lineup after leaving Game 4 on Friday due to a lower-body injury suffered in the third period on a hit by Auger. He was replaced in the lineup by Joe Piskula … The Reign were again without injured players Brett Sutter, Jonny Brodzinski and Kevin Raine. … The Gulls’ Mike Sgarbossa returned from a lower body injury to play his first game of the series.

Stat fact
–5-0 – The Reign’s record in the postseason when leading after two periods.

This and that off-ice
Team president Darren Abbott gave Stothers a handshake while the coach was in the midst of his postgame interview and inquired about a celebratory steak dinner.

Next up
The Reign will await the winner of the Lake Erie-Grand Rapids Central Division finals series. At one point Lake Erie was leading the best-of-7 three games to none but Grand Rapids has clawed back into the series and won Game 5 on Saturday night 6-1 to cut the deficit to three games to two. Game 6 is Monday at Grand Rapids at 4 p.m. PT. Games 1 and 2 of the Western Conference finals will be played this coming Saturday and Sunday in Ontario at 8 and 7 p.m. respectively. The series will feature a 2-3-2 format. Games 6 and 7, if necessary, will be held Tuesday, May 31 and Wednesday, June 1 if necessary, both at 7 p.m. at Citizens Business Bank Arena. 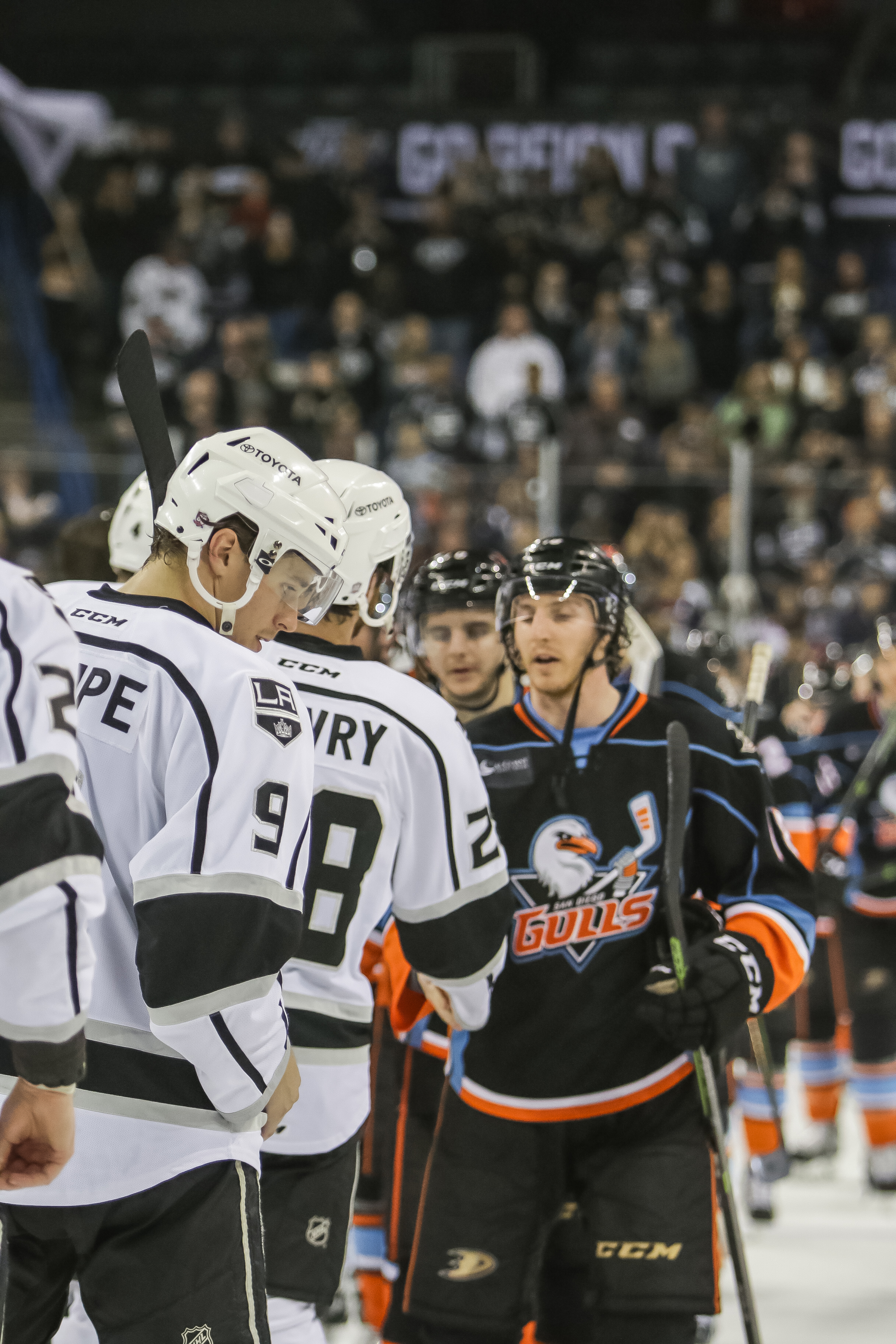