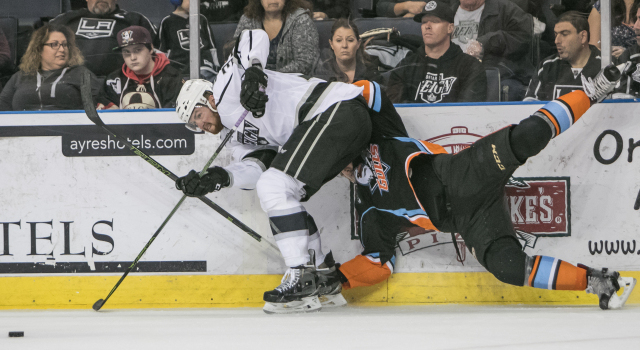 On whether it was “fitting” that Michael Mersch blocked a shot in the game’s final sequence:
Well, he does that for us. He’s an all-around guy. He scores big goals for us, he gets in front of their goalie, he gets in front of our goalie, he blocks shots. I mean, he’s a big body, and he’s willing to pay the price to have the team have success. It sets him apart from other people.

On closing out the series after allowing San Diego hang around on the power play:
I didn’t think so. I thought they were the team, I mean they were putting in a valiant effort. You have to tip your hat. They tried hard, it was a great series. Again, we played hard against each other all season long. I think it was 16 games going into this one, and tonight was 17, two exhibition games, 19. That’s 19 head-to-head match-ups, so when you pull it all together, it’s still pretty dead even. So, a good team.

On the penalty killing:
Well, we were good, and we had to make it interesting with about a minute-nine left. Backs asked me after the game if I needed a defibrillator, so it’s good to see that he had his sense of humor. But our guys have worked hard at that all season long. Sometimes it’s your power play, sometimes it’s your penalty kill. You’ve got to have success with both, and I think our guys have done a great job all season long, so I couldn’t be more proud of them. It’s a great team effort tonight and a great team effort in the first round against San Jose, and now against San Diego.

On the difference in a four-games-to-one series win:
I don’t know. I mean, we were a pretty determined bunch. Maybe we drew a little bit on the strength of our guys, the experience we went through last year. There was a definite resolve on our guys. We don’t like ‘em, so it’s easy to get juiced up to want to beat them. But having said that, they feel the same way about us, so I can’t explain how it happened. I just know that it did happen. I’m happy, though. [Reporter: Did you guys wear them down by this time?] Maybe. You know, we did play a pretty physical game. We tried to establish our forecheck. The one night that we didn’t, we didn’t get the results we were looking for. We were disciplined, we kept their power play off the ice for the most part. I don’t think we gave up any more than four penalty kills in any one night, so that’s good, but yet we played hard. I’m sure they were missing a few guys, but we were missing a few guys. That’s what happens in the playoffs. We won.

On the neutral zone play:
Well, we wanted to pressure them through the neutral zone. Again, it’s a team that their defensemen like to get involved in the attack, and they like to go towards your net. Their defense aren’t as eager to remain back in their zone, so we wanted to make sure that we weren’t making it easy for them to come up through the middle of the ice. You know, we had some good angles. I thought Kempe – you guys should be talking to Kempe tonight. He had multiple examples that we showed between periods to the whole team of him angling guys off and even finishing a check on a guy like Ritchie, and then he gets another one and angles a guy off right in front of our bench that goes into the D-zone, it hits another guy. I mean, there’s a guy that’s not known for his physical play, but that’s what it takes for a team to have success, and maybe that’s what it takes to have that four-one series win – guys stepping out of their comfort zone and playing hard and doing things that they don’t normally do, and I think that kid was unreal.

On everybody doing their job, making things easier for everyone else:
Yeah, but if you don’t have to go back and keep retreating for pucks, which is what we wanted their team to do. We wanted to put it in Montour’s corner. We wanted to put it in Theodore’s corner. Those are great skaters, but if they’ve got to keep going back to get pucks and they’re getting hit every time, bumped, here or there, sometimes they fall, they’ve got to get back up. Over the course of time it wears you out. And then last night, they went down to five D. With about seven minutes left, Bickell got hurt. So that wears on you. I think I said it earlier before – to win in the playoffs, you’ve got to have some talent, but you’ve also got to have some luck, and part of that luck is remaining healthy. Both teams have experienced it’s hard to stay healthy. So we’ll see how it goes from here.

On the similarities and differences at this point, compared to last year’s Manchester team:
Well, I think last year’s team, we had more offense. Like, naturally gifted scorers and playmakers with O’Neill, Weal and Shore. From the back end, we had Miller with 20 goals – 19, to be exact, but we round up to 20. We had Bodnarchuk. But there’s enough guys remaining from the organization that knew what it took to win, and the sacrifices you’ve got to make. You’ve got to believe in our system, and that’s throughout our whole organization. It starts with the coaching staff up top with the Kings, and we try to follow suit, and it helps when our guys get called up that they can step in and play. It’s very successful. But everybody has to do it. We had some great success when we can get every single guy, all five guys on the ice doing the same thing, whether it’s through the neutral zone or in the defensive zone coverage, or trying to get things going in the offensive zone. It’s a hard way to play, it’s a physical way to play, it’s very demanding, but we try to mix it in with some good work days and some recovery days and some maintenance days. Give guys like Budes lots of games off – I mean lots of days off. [Reporter: I think we discussed that before, didn’t we?] Yeah, but I’m sure you’re going to ask, ‘Is Budes going to start Saturday?’ Yes.

On the mentality of heading into a game with a potential to end the series:
Every part of this is a part of the learning process that we have to go through in the American Hockey League to get into the National Hockey League. We had a situation last week where we had a back-to-back game and we were at home, and we weren’t very good. Like, we weren’t very good at all. And as painful as maybe that was, I think we learned from it. There was a different, I don’t know, demeanor around the room, or there was just a quiet confidence today different than say last time. Maybe that’s good for us. When things happen too easily for you, then you just think you’ve got to work. To win in the playoffs, you’ve got to work. You can’t even take a shift off. Like, you’re seeing what’s happening in the NHL. All the top teams are falling by the wayside. It’s a tough, tough thing. It’s a good process for us to go through. We did not want to go back there. You know what I mean? We’ve been following Lake Erie and Grand Rapids, and Lake Erie has a three-nothing lead, and now it’s three-two. It kind of concerns you a little bit if you had that three-nothing lead, and now it’s three-two. We kind of enjoy it now. Let them play as many games as possible, but it’s part of the process, and our guys have been good, and again, we can draw a little bit from last year’s experience with some of the older guys who have been through it and know what it takes.

On winning a series with an undesirable 1-1-1-1-1-1-1 format:
Like, I just make the statement that I don’t like it, but it doesn’t mean you don’t deal with it. There are all kinds of things. Like, yesterday we were there, and the second bus is late picking the guys up to get them to the rink. So, how do you handle it? You just deal with it. You know what I mean? That’s part of the process, too. There are guys who are so superstitious that if something happens, their whole day is ruined because they stepped on a crack. And if that’s your mindset, then you’re never going to be able to deal with anything. We’ve taken stuff all year long, and we’ve brought it in to the attention of the whole team and said, ‘This is what you may face. This is what you may have to deal with,’ whether it’s an icing that you thought was an icing that they wave off, whether you get a penalty with a minute-nine left. We did it in Game 1. We got a penalty – JST took one, and now tonight, Backs took one. You just go, ‘OK.’ Our guys were unbelievable on the bench. ‘We’re killing this off.’ You don’t say it without dropping a few F-bombs, but you know what I mean? Because we’ve been through it, it’s not that hard to handle. You try to just stay low-key, calm, professional. [Reporter: Glass is half full.] The glass is half full. Always. [Reporter: That was the best answer this series. You’re on a roll.] Then I would say we’re done.