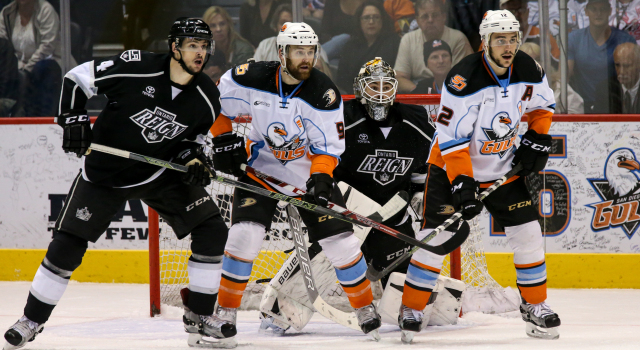 On Mike Amadio’s play and his demeanor:
He’s kind of mirrored what Kempe did last year. He came in, one guy finishes junior and the other guy finishes up in Europe and he comes over and you really don’t know much about him. You hear things from your scouts and what he can do. Yeah, you can look at his stats and say, ‘oh, it’s pretty impressive.’ He had close to 100 points in his last year of junior. But until you actually see him on the ice and see what he can do, he kind of grabs you in a quieter way. He’s not the skater that Kempe is, but you can just see the hockey sense, the play-making ability that he has. Man, he’s pretty calm and cool under pressure. Holy smokes. He’s a talented guy, you can see that. He’s just gone about playing like he’s been here all year. He’s obviously got some skill to be a play-maker and a finisher, but he’s also pretty good away from the puck. As a coach you’ve got to be able to play a guy. You can’t just rely on it, he may get one chance and score. He’s got to be able to look after his end and he’s done so. I guess he’s this year’s playoff version of Kempe. [Reporter: Seemed like he looked more comfortable tonight, did it seem that way to you too?] Again, it’s his disposition. Quiet kid. … He’s got a little Schultzy in him. His pulse never rises, his demeanor never changes. He’s got more upside offensively than Schultzy, but you know what I mean. The kid’s calm, he’s calm under pressure. [Reporter: Are some players out of junior just wild horses?] Most of them, you’re a little leery about putting them out on the ice because they’re not aware of their responsibilities. So, that makes it tough. Every player that we’ve had in has shown us a little something. So I think the future looks bright for the Kings organization and their prospects. It’s going to take some time for some of these kids. Amadio’s doing well right now, but again, you’ve got to look to what would he do in a full 68-game season, the travel and everything else. But right now he’s proving that he’s capable and he’s capable of some big plays when we need him.

On Adrian Kempe and his two-goal performance:
He’s been really good for us in the playoffs and I think he wanted to kind of make up for last game there where none of us were very good. Again, the way he can skate, get up and down the ice. He’s got a great shot and he’s somebody that the opposition has to be aware of. If he has the puck you know he’s capable of distributing it to somebody else, he’s not strictly a shooter. But then when he has it and he has a chance to shoot he’s got a pretty good shot, too. I thought it was a good effort, good rebound effort from everybody after what turned out to be a pretty disappointing display on Sunday.

On the back-and-forth in the third period:
It was pretty good, pretty fast. It was entertaining but again it’s a series against two teams that you certainly wouldn’t expect to be coming to the rink and having to nudge the person next to you to wake up. You don’t want to miss a moment of this, it’s great hockey.

On the two overtime wins in this series:
You really don’t want to get into overtime. It’s kind of nerve-wracking for everybody and it’s extra time played. You never know what’s going to happen. It’s one shot that decides it. It is what it is. We managed to get a win here tonight and now we’ve got to get ready for tomorrow. [Reporter: Both overtimes on the front end of back-to-backs. How hard is it to manage?] You’ve got to go out and win the game so you’ve got to play to win. There’s no sense sitting back. It’s added minutes to everybody. You are playing again tomorrow so it’s going to be hard on both teams. You don’t realize how much it takes out of you both physically and emotionally. Mentally, it’s a lot. These guys have to be dialed in every shift, even on the bench because they’ve got to know who they’re taking, who they’re coming for, what the responsibilities are. If I change it up, they’ve got to be ready. … There’s a lot going on, it keeps you busy both mentally and physically and right now we’re probably mentally and physically tired, so is San Diego. I’m the team that’s going to rally and get ready for tomorrow. Let’s get at it.

On Zach Leslie’s playoff debut:
I thought Les did a real good job. He hasn’t played in a while but he’s been a great, great soldier. There’s a kid that’s been out of the lineup more than he’s been in. He just wants to play. Went down to Manchester, just so he could get some game action. Never complained one bit. Came back with a great attitude and kind of hoped he was going to get into the lineup on a regular basis and it didn’t happen for him. He hasn’t changed, he worked hard. He’s a good person, a good teammate and he’s a good player so I was real happy for him tonight.