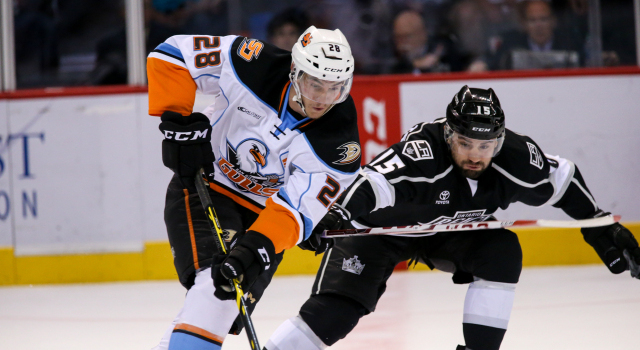 On what went wrong in overtime:
I thought losing our defenseman there (Stu Bickel) with whatever it was, with 6 minutes left (in the third period) put us on our heels a little bit. Ontario is a big heavy team and they were coming hard. I felt like our D-men were starting to get gassed. When we came out in overtime, it seemed like we couldn’t get out of our zone. We had a couple of unfortunate bounces, including one that led to a 2-on-1. The one thing we definitely have to tweak is we’ve got to handle that puck better through the neutral zone. We’re trying to make plays when they’re not there. We want to make their defensemen go back and get the puck. So, some better decisions there. Overall, that’s the game. These are two evenly-matched teams. It’s going to be a one-goal game every night.

On Bickel’s injury:
I’m not sure, but he was holding his knee. He’s an extremely tough man and he was hurting, so I’m guessing that (it’s a knee injury). [Reporter: What happened on the play?] I didn’t see it. I was watching his pass. He had moved the puck and was watching his pass. I haven’t even looked at the video or anything.

On if the defense got rattled after Bickel’s injury:
I thought we were OK for a little bit, but when you have to run five D, it disrupts. It’s near the end of the game and the guys are slightly gassed with the emotion and the play already. We had some guys harder. I thought that was the biggest point. The other is we’ve got some inexperienced kids back there, guys who are fresh out of college and believe me, they deserve to be in the lineup right now. We’ve played extremely well, but usually you’re going the other way, leaving your vets out there, the guys who’ve been with you all year and cutting down their (the youngsters’) minutes. We had to go the other way and up their minutes.

On the wild third period:
For two teams that pride themselves on checking that third period was as wide open as a track meet. I wasn’t quite sure what was going on with either team. It was such a roller-coaster ride in the third period. We would answer back, they would answer. I just think the biggest turning point was when we went down to five D, especially when we came out for overtime. We were in a highly deficit mode, and I’m not sure we made a tape-to-tape pass coming out of our zone in overtime. I thought that’s what killed us.

Note: Stick taps out to Elliott Teaford for sharing these quotes.