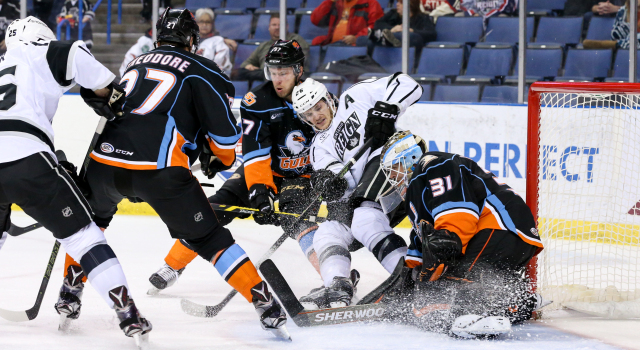 –Mike Amadio scores in overtime after the puck bounces to him off the end boards after wide shot by Kevin Gravel:

–A look at both of Adrian Kempe’s goals in the third period:

–San Diego thought it had scored a power play goal with 5:21 to go in the first period, but Brandon Montour’s goal was overturned when the officials ruled the puck went through the outside of the goal netting. Here’s a great look of the play:

–By scoring two goals, Adrian Kempe leads the Reign in playoff goals with 4. It was also his second two-goal game of the postseason. His five playoff points trail only Nic Dowd, who leads the team with eight (3 goals, 5 assists).

–Peter Budaj made 25 saves and improved to 6-2 in postseason play.

–Mike Amadio’s overtime winner was his first pro goal of his career, and it came on his 20th birthday.

–Gulls defenseman Stu Bickel left the game late in the third period with a lower body injury and did not return.

–San Diego goalie Anton Khudobin has been taking shots this week, but Ryan Faragher still backing up Matt Hackett for now. Khudobin has not dressed since suffering an injury in Game 4 of San Diego’s first round series against Texas.

–There was a new look up front for Ontario. Here’s how they aligned in line rushes:

–Jonny Brodzinski was out for another game due to injury and did not take the ice for warmups. Brodzinski, who has not played in this series, was skating in red on the team’s top line in Wednesday’s practice and was scheduled to visit with team doctors on Thursday.

–How the Gulls lined up: