Sutter update from the LA Times (Expect an announcement soon) 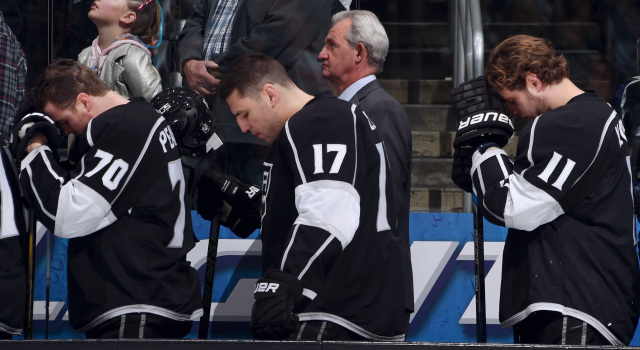 The lede, via Lisa Dillman:

He did not sound like a man who was contemplating other NHL options or even planning to raise cattle full time.

Kings Coach Darryl Sutter was direct about his future with the organization in an interview Thursday morning with The Times. The Kings have made a contract offer to their two-time Stanley Cup winning coach, and Sutter indicated his intention was to be behind the bench in Los Angeles this fall.

“I’m under contract until July 1,” he said. “I have no desire to go anywhere else or do any of that. We’ll get it worked out. That’s my plan.”

There are other interesting Sutter remarks in the article, including one that shines some light on this interim period in which he has received a contract offer but has not signed, saying, “We have a lot of players that are free agents and a lot of young players that are close to playing here. As coaches, you’re trying to get through where you could be next year with your roster. That was more important to me the last two or three weeks than any of my stuff.”

Another Darryl Sutter update. Hearing he has agreed to terms with the Kings

Several sources over the past two weeks spoke with some optimism that that Sutter and the team would ultimately come to a signed agreement, but those sources were Not Darryl Sutter, so it’s interesting to hear the Kings coach address the subject directly. As noted earlier, there was no “rubber stamp” sign-off or “decision” that the team would make towards Sutter, but that any agreement, while not necessarily based on a “mutual” decision, would consist of the team making the coach an offer, and the coach deciding whether he would take it.

Dillman and I are scheduled to join Kings Men Podcast later today to discuss Sutter and the Kings’ off-season approach; that podcast will be posted early Friday morning.

LA Times: Darryl Sutter still hasn’t signed a new contract with the Kings, but says, ‘We’ll get it worked out’