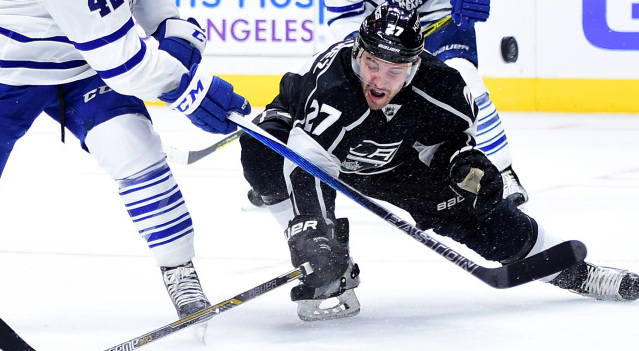 Defenseman Alec Martinez underwent surgery and forward Dustin Brown underwent what was described as a “minor procedure” at the conclusion of the 2015-16 season, LA Kings Insider has learned from Kings hockey operations.

Though Martinez was limited to 11:43 of ice time in the five-game, first round defeat to the San Jose Sharks because of a groin injury, the surgery was actually to correct shoulder discomfort that had been bothering him for much of the season. The expected recovery time for the surgery is in the ballpark of three months, according to a source in hockey operations, so the timing was right to correct the injury at the outset of the off-season. Everything appears to be “in order,” so barring any unforeseen variable, he should be expected to participate fully in training camp.

In 78 games this season, the 28-year-old totaled 10 goals, 31 points and a +16 rating as his time-on-ice average jumped over a full minute to 21:09. Since the 2013-14 season, Martinez’s TOI average has jumped five minutes and 28 seconds as he has emerged as a second-pairing defenseman capable of playing in a variety of roles and situations. The left-shot defenseman spent the majority of his minutes playing on his off-side alongside Jake Muzzin. He recently completed the first year of a six-year, $24-million contract.

Brown, 31, underwent a procedure on his right wrist at the conclusion of the season that isn’t expected to impact his off-season training regimen or preparation for training camp. In 82 games, Brown totaled 11 goals, 28 points and a -5 rating during the second year of an eight-year contract that carries a $5.875-million cap hit.

During media availability late in the San Jose series, Darryl Sutter told reporters that Jordan Nolan was back amongst his teammates and continuing to recover from March surgery to fix a herniated disc in his back. Nolan isn’t at 100%, but he has progressed enough that he can return home to Ontario to complete the rehabilitation process. He should also be expected to be ready come September. In 52 games, Nolan had five assists and an even rating.

Based on correspondence with hockey operations earlier this month, Jeff Carter did not deal with anything significant injury-wise throughout much of the second half of the season following an upper-body injury he suffered in a win over Arizona on December 26.