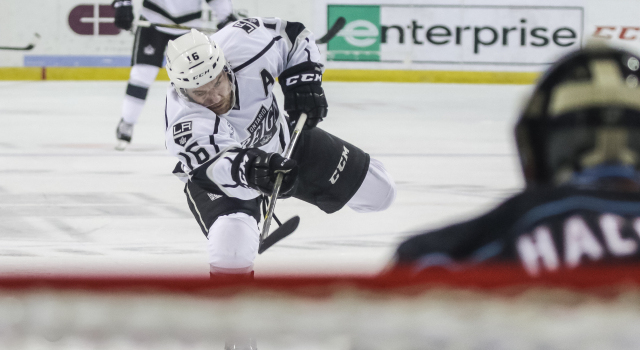 It’s a glaring stat line for the Reign’s leading point producer in the regular season.

Right wing Sean Backman had 55 points (21 goals, 34 assists in 68 games) and has just one assist in postseason hockey.

Considered his mix of line partners throughout the postseason: Backman’s skated mostly centered by Nic Dowd but with a left wing mix that has included Kris Newbury, Sam Herr, Michael Mersch and Brett Sutter when he was still healthy.

Another change is underway.

Head coach Mike Stothers put the veteran Backman on the right side with rookies Adrian Kempe and Mike Amadio in the third period of last Sunday’s Game 3 loss to San Diego and said afterwards, “I kind of got excited about that. There’s two guys that can skate, there’s a young kid who can make some plays. Why not try it?”

And it looks like he just might now stick with it for Friday’s Game 4 in San Diego as the Reign come in with a 2-1 series lead. The purpose behind the change is to ignite Backman.

“Backs has gone a while without finding the back of the net. That’s unusual,” Stothers said on Wednesday. “It’s only a matter of time before he does. But yes we have talked about it, yes we have met about it, yes we are working to address it. Sometimes just a change of scenery, different line sometimes that’s what gets ya going.”

The Kempe-Amadio-Backman line rushed together in Wednesday’s practice and it should likely stay that way unless injuries cause more mixing up (Jonny Brodzinski is hoping to return Friday).

“They’re two terrific players,” Backman said. “Just seeing the little bit from Amadio, he’s a good player, he’s smart. I’m pretty sure he scored 50 goals in the last league that he played in junior. He can score. Kempe’s obviously just a talented young player who can pretty much do it all. Maybe mixing the lines up helps me a little bit, we’ll see.”

If Backman can break out of his slump, it would provide a major scoring boost for the Reign, who have scored an average of one goal in their last two games after a 5-3 Game 1 victory against San Diego.

It’s not without trying, though. In fact, there’s been a lot of trying from Backman as he leads the Reign this postseason with 31 shots on goal. He led the AHL in that department in the regular season with 250.

“I think the good part of it is he’s still getting his shots, which is good,” Stothers said. “I think it’d be more of a problem if he wasn’t getting shots or chances. They’ve just got to find their way through. … You get shut out on Sunday, you’re not going to win. You need to score some goals and he’s a guy we counted on all season long. Again, we know it’s only a matter of time before he breaks out.”

The goal is to keep firing until one breaks through. Twice in three games series Backman has led his team in shots on goal, including 7 in Game 2 which tied for the game high.

“Just keep doing the things that I have been in in getting pucks to the net,” said Backman, who turned 30 on April 29. “That’s the only thing I can say. Sometimes these things happen. This one’s a little longer than I would like it to be, obviously. Just hard work and getting pucks to the net. There’s no shortcut for this type of thing. Just got to keep with it and hopefully one falls for me soon.

“[Stothers] wants me to score goals, it’s no secret. That’s one of my roles on this team is scoring goals. He’s trying to help me as much as he can by maybe switching up the lines like we did this week, so we’ll see. I’m just going to work as hard as I can and do whatever we can to help my team win the game.”

Another opportunity will present itself on Friday.