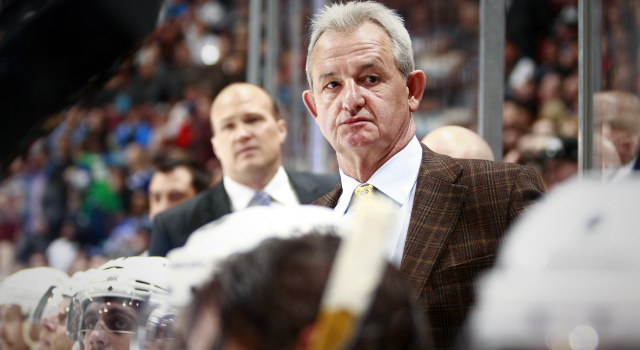 Via Elliotte Friedman, on Saturday:

Via text, Darryl Sutter agreed with Dean Lombardi that he is "still undecided" about coaching LA. Sutter said he is watching to see…

what the Kings will look like through free agency, the cap and its prospects. Said his family has enjoyed it in LA and "that has weight"…

but wants to win another Cup and that is also "a big factor." That is it for now.

That’s an interesting update from Friedman and Sutter, and it’s also somewhat contrary to what I had heard from a pair of Kings sources, one of whom I had spoken with on Thursday at the Reign-Gulls game and had indicated that the discussions on a contract extension for the Kings coach were fairly advanced. This update, though, indicates that the process towards a hypothetical agreement appears to be ongoing and open-ended. I mean, you read Elliotte’s tweets.

From my understandings, in speaking with those inside and outside of hockey operations, there was no “rubber stamp” sign-off or “decision” that the team would make towards Sutter, but that any agreement, while not necessarily based on a “mutual” decision, would consist of the team making the coach an offer, and the coach deciding whether he wants it. If I’m reading between the lines here, just like many of you are, I’m still getting the sense that Darryl is in the process of making that decision, and that there’s not a ton of scale-tipping one way or another at this point. I hate going out on a limb to speculate, but I still think this hypothetical contract – reported by Lisa Dillman of the LA Times as being two years plus an option year – ultimately gets done.

With that said, here are several of Sutter’s references towards roster construction and the salary cap from seasons past:

February 9, 2016
On players getting younger across the league, and how that affects coaching:
I think the young guys are the staple that pushes teams forward, just because that’s what the salary cap was intended to do, and it’s done that through the league. If you’re an older team you have seven or eight guys in their 30’s. Where everybody is is between age 26 and 28. So if the average age is 26.3 and it’s 28, well that’s what 25 teams are. There’s nobody that’s under that. You might have one player that’s 19, but you night have one guy that’s 35, so that brings it back in. There’s no difference in the teams’ ages. If you’re saying that one team’s younger than the other, it’s like point-six years. So if I’m born in January, you’re born in December. It’s not really much difference. You just can’t be too old, and if your team’s too young, you ain’t making the playoffs. You’re still saying, ‘well, I’m a lottery team,’ or ‘we’re building.’ That seems to be one of the sexy things that everybody says. ‘We’re building.’ You want to make the playoffs. If you make the playoffs in today’s game, you have a chance to win the Cup. Done deal.

September 24, 2014
On why there are fewer dynasties in the current era:
More teams, more parity, salary cap. You don’t even look at anything other than that. I mean, really, the league started fresh when they started a salary cap. The top teams, you can get beat out in the first round and still be a top team. It’s not about winning a championship. Everybody that makes it now is a legitimate championship team. It used to be teams limped in with 85 points, so there were more upsets. It’s a lot closer. I wouldn’t call anybody that gets in now an upset. You get beat in the first round, you’re a good hockey team. Heck, I said it in the San Jose series. Last year I thought the team that won that series was going to win the Stanley Cup.

February 25, 2013
On any team winning on any given night:
“That’s what the salary cap did, right? It made everybody equal. That’s why you’ve had seven different champions. Teams that make it, teams that don’t make it. [There’s] clear parity in the league. It used to be top guys, bottom guys…Now everybody’s the same. Really, when there’s no out of conference play, [there are] 15 teams, right? So the three teams that had great starts are teams that are 15 points ahead of everybody.”