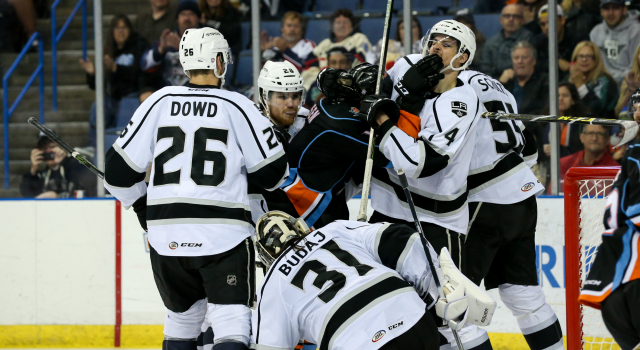 Vincent LoVerde, on San Diego’s push:
We expected that. They’re a desperate team. They were down two-O at the time. We knew they were going to come out with a hard push. I don’t think we did a good job matching it but credit to them, they played well.

LoVerde, on if the game was more mental than physical:
A little bit. Every game’s a mental game, maybe this one a little more so because there’s no day off in between. That’s the way the scheduling is. I didn’t think our execution was great tonight but we’ll regroup here and be better on Friday.

LoVerde, on why the Reign lacked execution:
I’m not sure. I can’t put a finger on it. [Reporter: How much did their push-back have to do with it, I would imagine a lot?] Yeah, absolutely. At the beginning of the series we knew it was going to be a physical series and today even more so. They were a desperate team down two-O. Obviously knew it was a big game for both the teams. They came out with a hard push and yeah it was a physical game.

LoVerde, on the long break after three games in four days:
Any time you can get a little rest and guys who are maybe a little banged up can get a couple days off it’s always good. You watch video. You do the usual things. We’ll focus on practices here this week and preparation for the game on Friday. [Reporter: Can it be counterproductive? Can it be too much time off?] I don’t think so. Focus will just have to be good all week and they will be. But no, I don’t think it could be counterproductive.

LoVerde, on San Diego trying to beat the D wide:
We knew they were going to try to get pucks to the net, pucks on Budes. They did that tonight. Rebounds around the net and whatnot.

LoVerde, on the Reign’s power play and it going 0-for-3:
I think our execution has to be better. We’ve got to want the puck on our stick. Everyone has to be better, myself included, on the power play. Pucks to the net, I think we have to go back to simplifying things. That’s what practice is for this week. We’ll watch some video and try to do some things during practice and go from there.

Kevin Gravel, on the Reign’s energy:
I thought it was fine. They went through the same thing we went through. We expected a push from them. We got a push from them. They had a couple close calls there in the first period but it’s on us to bounce back and respond there. The energy was fine. I think the guys felt fine. Just nothing really to save it for, we have what, a week till our next game? Just try to tell yourself that and if you can’t get up for games right now then there shouldn’t be an issue.

Gravel, on how the Reign’s defense can help solve San Diego’s trap:
We’ve got to get our feet moving. Obviously they’re up by a couple goals so they’re not taking any risks, right? If we can get our feet moving maybe it will open up a lane or something like that or we can get the red line ourselves. As a whole group our team is better when we’re moving our feet and that includes on D core. When we’re just kind of standing back there looking for lanes it’s easy to clog up but when we’re moving our feet, things are opening up, guys are getting getting open. When we’re moving our feet and creating opportunities and even getting the red line ourselves and getting it in deep it backs them off and creates things for us.

Gravel, on if tonight’s game was more mental than physical:
Obviously it’s a quick turnaround but like I said, you have to be able to get up for these games. It’s Game 3, second round of playoffs, against San Diego, right? There was no issue for that. They went through the same thing we did. They played late. I don’t know when they got here, today or yesterday, but it doesn’t matter. Once that puck drops you’ve got to be ready to go.

Gravel, on the Reign’s execution being off:
A little bit. Maybe a missed pass here or there. Kind of comes back to moving our feet again. Teams sit over the top, that’s what everyone does in the neutral zone. They try to clog things up. You want to get the puck back when you don’t have it, right? If we get our feet moving and create things as a D core and open things up it creates things for our forwards and it gets the puck in their hands which is what we want because we’ve got a lot of guys on our team who can skate really well. When we’re skating as a D core and we’re skating as a group of forwards we’re pretty tough to play against.

Gravel, on Matt Hackett’s shutout:
It’s a long series. He played well last night. He played well tonight. But at the same time I think we can throw more at him and we can go try for second opportunities a little bit more. I don’t know how many shots we had tonight but I don’t know how many opportunities we really had. I think as a whole group, D and forwards, we can do more. Second opportunities, kind of throwing pucks off his pads and kind of crashing his crease. Similar to what they did on even their power play goal. Just floated one on net, got a rebound and banged it in. As us as D it doesn’t have to be the hardest shot, just get it through. Create some havoc. It doesn’t even need to get on net, just kind of get through there and try for those second and third opportunities because we have some guys, some big guys, who are a force around the net and can really bang away and get those greasy goals for us.

Gravel, on moving on after the loss:
It’s a long series. Everyone expected it. Obviously you want to win every game you play but we got four or five days here to regroup, take a step back and evaluate where we’re at and evaluate our game here and have a good week of practice. That’s what we’re going to do. We’re going to come back here whenever we have practice next and have a good day there. And next day have a good day then and just keep getting ready for our next game.

Gravel, on Ritchie’s power play goal and the San Diego power play overall:
They move the puck well, they always have. Almost killed off there but the D men out there and Mueller they move it around pretty well and they create opportunities for themselves. They shot a puck on net. It wasn’t a hard shot, they just created and opportunity, there was a rebound there and Ritchie was there to bang it in. Either got to get in that lane or block the shot or whatever but they’ve got a good power play. If we take as many penalties as we do, chances are maybe they’re going to get one. We’ve got to stay disciplined and try not to put them on the ice first of all. [Reporter: Did you see anything different from their power play?] I don’t think so. This is what, the 15th time we’ve played them? We’re pretty familiar with what they’ve got. We know they have a lot of skill on both units, especially with their D core up there and then Ritchie in front of the net and Mueller on the half wall. We know what they’re doing. They move it well. First and foremost we’ve got to stay out of the box and keep them off the ice. But you know what, we’ve got a good penalty kill, too. We have a lot of confidence in our penalty kill and it’s been great so far in the playoffs and for us to keep having success it’s going to have to continue to be good for us.