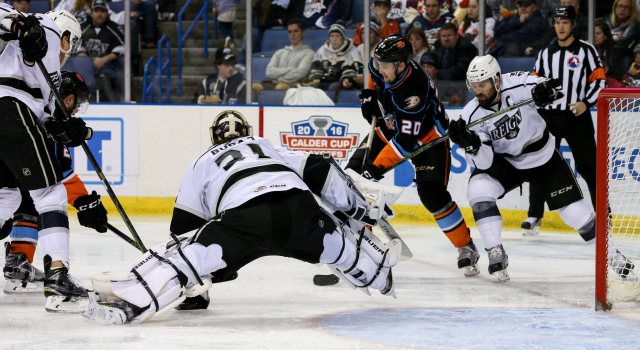 On if he agrees with Vincent LoVerde’s assessment that the Reign lacked execution:
I would never question my captain, that’s why he’s the captain. Sometimes your players have to self-evaluate, and I would agree with that. For whatever it was, we weren’t crisp, we weren’t sharp, we didn’t seem to have energy. I don’t know if it was us or them or a combination thereof. You win last night in overtime in their rink and it’s hard to get that energy back going the next day. But I also know you’re playing a team that came in here, they looked like they were desperate and they played like such.

On San Diego’s trap in the third period up 2-0:
You’ve got to try to attack with speed. If they’re just going to wall the neutral zone, they don’t have speed. You’ve got to lay it by them and then pursue it on the other side. I think we did do that except we were giving it to their goalie, which was ridiculous. We weren’t laying it into the soft areas and hunting down their defensemen. Their goalie was playing it and setting it up for their D or making plays. We even dumped it right at him and he covers it up, get a D-zone faceoff get fresh guys on the ice. It was some major brain cramps on our guys in that regard.

On mixing up the lines in the third period:
I can only watch for so long. If I don’t like what I’m seeing then I’m going to change it up. There was some different looks in the third period. We didn’t have anything going, so doesn’t make much sense to keep rolling the same guys out if there’s nothing going on. Sometimes it works and you guys are going ‘oh my god, what’d you think about that one?’ Sometimes it doesn’t work. It didn’t work tonight. Actually I didn’t mind the changes. You’ve got Amadio in the middle with Kempe and Backs, I kind of got excited about that. There’s two guys that can skate, there’s a young kid who that can make some plays. Why not try it? Who knows. It’s not to say we’re going to stick with it. But at that point when you know your team, know your players, you can tell. Even when you’re talking to them and you’re addressing them on the bench, sometimes there’s just nothing being registered. You can say, ‘well, did you light them up?’ There’s no sense. It’s just one of those games where it’s just like not quite in sync, not quite in focus, not quite, and it’s just missing. Basically it’s just like when I give you guys a long-winded answer and your eyes glaze over and you stop paying attention and you rely on your microphones to say, ‘what did he just say?’ That’s the way it is. We’re all guilty of the same thing. We only have that long an attention span.

On Ritchie’s power play goal in the third:
Two seconds left. Two red-rotten seconds left. Whether it’s two seconds or you get scored on early, it’s a team that has a very, very good power play. We were good and we kept them to four [power plays]. They still find a way to score. If you look at it, we had our opportunities, we didn’t [score]. It is a big difference. You look at it, ‘geez you killed it pretty good for a minute and 58, but it’s a two-minute penalty. They’re good.

On Jonny Brodzinski’s absence and what it does to the lineup:
Brodz can score. He’s got a shot that’s lethal, so yeah, you miss him. It is what it is. He’s not there. Somebody else has got to step up. You can’t expect to win a game if you’re not going to score any goals. It’s the responsibility of everybody else. [Reporter: Can he get healthy in the four days off?] I’m not a doctor so I don’t know for sure if he is or isn’t. The four days will certainly help him, among others. It also helps the opposition, too. They’re probably thinking, ‘oh, this is great.’ Get some guys with a better chance of being able to play or closer to being able to return. One never knows. We had it last series with Crescenzi. It came right down, and I’m telling ya, I’m not even lying it came right until after warmup and both game sheets are in front of me and it’s like ‘can he? Can he not?’ He was able to play and what’d he have, three points? We always hold out hope. We’re always optimistic. Always have that glass half full. [Reporter: So Brodzinski, three-point night when he comes back?] I didn’t say that, but if he can play, he’ll play. If he can. We’re not going to put somebody in there that can’t play or is going to do further damage to their career. Have to wait and see.

On Sam Herr taking two hard hits on back-to-back nights:
He’s a tough son of a b—-. He just keeps getting up. I think we’ve answered that question. Nobody can tell me those college guys aren’t tough. He just gets up, he just keeps playing. Good for him. That’s what the Kings are all about. Get up, don’t lay there. Man that just irks me when guys lay there. Get up. So, good for him.