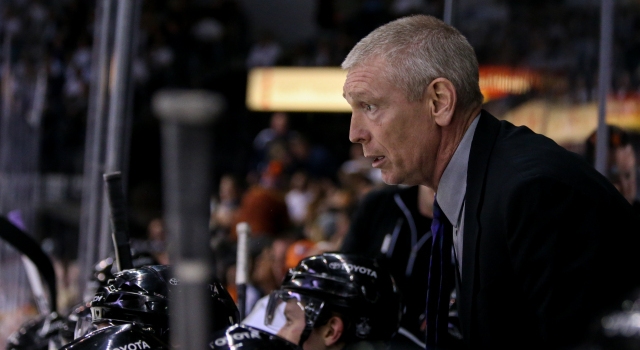 On Auger’s play and the game-winner:
You need guys to step up in the playoffs each year and last year Augs got a taste of it and this year he wants to be more of a factor in them. I thought after Game 1 he was one of the best players on the ice. Tonight, very opportunistic. He’s a big body. As the game wears on, those bigger bodies are harder to move out and he’s working the puck down low. It all starts with winning a faceoff. Kempe wins the draw, Gravs just takes a couple of steps, walks to the middle, wrists it to the net. He just wrists it to the net. Just get it through, just like we did in Game 1. Get it through to the net. A rebound’s there and Augs is ready to put it in the back of the net. So, yeah, it was a good play from all those guys.

On Kempe’s improvement in the faceoff circle:
That’s a tough situation to come into. That’s not his forte yet. He has many talented and great attributes, not sure that’s one of his strengths yet. When you’re as talented as he is, there’s only telling how good he can become. I think that that was not something we were exceptionally good at tonight was faceoffs. Win a draw, good things happen.

On the start of Game 2 and the series overall:
I thought the first period was a terrific period of hockey. Oh my goodness, it was terrific, from both sides. You’ve got one game that’s decided in the last few seconds and tonight it’s decided in overtime. I think it’s pretty much what we’ve all expected. It’s been hard-fought. It’s two really good teams and it could be any number of different results, that’s how tight it is.

On keeping the Gulls to the outside:
All season long we’ve tried to limit the number of opportunities our opposition has. We’ve tried to do a good job in our zone of keeping the shots down. It’s a good team. They get that guy coming in late, he’s dangerous. Get their defensemen involved, they’re dangerous. One split second of missed coverage and Ritchie scores a pretty nice goal. Shooting the puck from there, that’s one talented individual. Big son of a gun. He’s got some soft hands to go with it.

On last year’s experience helping in OT situations:
I suppose it helps a little bit but we’ve got some guys who have never experienced that. If you look more to what we experienced this year, throughout the season we’ve grown as a team and we’ve had a lot of close games. We’re not a team that fills the net, we’re not like the Marlies, a lot of high scoring offense or something like that. Even Texas, they score a lot of goals. We’re not like that. We’ve had to learn to play through those close situations and go right down to the final buzzer at times. Sometimes we’ve come through and sometimes we’ve fallen short. Perhaps maybe we’ve learned from those times that we’ve fallen short.

On if he was happy with Nic Dowd’s play:
Yup. I don’t think I could be disappointed in anybody. It was a darn good game so yeah, they were all good.

On Matt Hackett’s performance and if the team ever got frustrated:
It’s never frustration. We don’t sit there and look up at the shot clock and see how many we’ve had, we just want to keep taking the next one. That’s what you do when you get into the overtime situation. All right, just put pucks to the net. It’s usually a crazy one that goes in. … I would agree, I thought Hackett was outstanding tonight. I thought he played a really good game. He looks like he could win a gold glove in center field with that glove of his. Perhaps he’s a ball player, too. [Reporter: But is is hard to keep from getting discouraged?] I don’t know if discouraged is the right word. You might get discouraged if you weren’t getting any shots. You’ve got to be doing something right if you’re getting some shots. It’s a matter of — I don’t care how good a goalie is or how good a goalie’s playing, if you get enough pucks at him, something’s gonna get by him. Discouraged? No. Reload. Run out of bullets? Reload. Empty the magazine, let’s go.

On the series lead and the opportunity to go up 3-0 on Sunday:
It’s two games, that’s it.

On Chris Wagner’s hit on Sam Herr:
Doesn’t much matter what I think about the hit on Herr. They called it a two. Herrsy was able to come back and play, so that’s a good thing for us. I don’t want to get into a pissing match with the refs. There’s a good chance we could have the same two tomorrow. As far as I’m concerned, they did a great job.

On if the Reign will have a morning skate on Sunday:
We’re going to skate as soon as we get back. We’re going to get off the bus and get their equipment on and we’re going to get out there and give’r. [Reporter: Yes, coach Brooks]. I never saw that movie, I’m Canadian. No, we won’t skate tomorrow. The extras will, the guys that didn’t play tonight. We’ve got to get ready for a game tomorrow, 7 o’clock. [Reporter: What’s your philosophy on that?] To look at me, you’d think it’s a long time since I played. But I get it, I understand. You’ve just played a war. You’re going to play three games in four nights, the last thing we need to do is leave it out on the morning skate. You talk to your core group of guys, ask how they’re feeling. But they don’t need ice tomorrow. They need ice tomorrow like a turtle needs air brakes. They don’t need to skate, at all. Get ready for 7 o’clock.