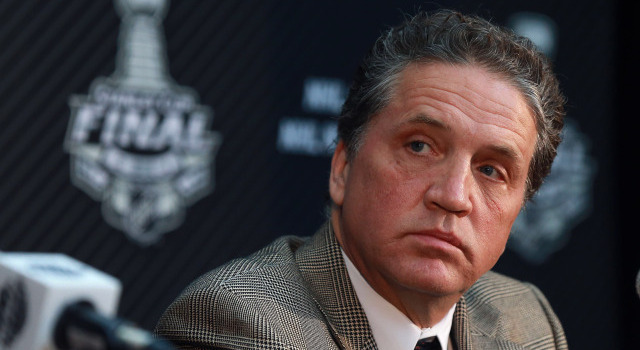 Dean Lombardi spoke to the media this morning on a conference call that ended abruptly in advance of Lombardi’s 11:00 a.m. meeting, according to an email after the call ended.

In the 30 or so minutes that Lombardi was on the phone, he was asked about Darryl Sutter, Milan Lucic and unrestricted free agents, and Dustin Brown.

Lombardi’s answers were emotionally charged and appeared to come from the gut, that same area that he described as having taken a punch at the conclusion of the 2015-16 season. While asked specifically about Sutter, he responded with what he called his preamble, a state of the organization address that touched on a recurring theme: the Kings can’t continue to keep operating the same way and expect to remain high atop a perch, looking down at 29 other NHL franchises. There was some concern that the team had stagnated in its approach towards winning, which was laid out in detailed answers that also contained passionately tinged tangents.

As for Darryl Sutter, Lombardi did note that the team has an “offer on the table” for the coach, whose current contract is set to expire. The entire preamble, followed by more particular questions about Sutter, are presented in a question-and-answer transcript so that no context is lost or out of order in detailing the decisions that lie ahead for the team. More will follow throughout the day.

Q: I was wondering if you had any updates on any progress with Darryl’s contract talks.

So, to make a long story short, that’s what’s been going on here for two weeks. The coaches, Darryl certainly has an offer on the table. I think you understand his personality and things, and I think it’s smart. Just like he has to be on board when he came here, him and everybody else, it’s the same for my scouts and the people who are under contract right now. If we’re not up to this challenge and being pushed right now, then you don’t want to be in. I think everybody’s faced with that, whether they’re under contract, and I think it’s a smart thing. Everything’s a negotiation in everything else. But I think there’s an offer that’s certainly respectable. But I don’t think this is about money. I think this is ‘OK, are we ready to do this?’ Because there’s going to be a lot of work, and just like building it in the past, you have to stick with some tough times. Like I said, we’re not going back to there, but make no mistake, for us to get this back on track, there are going to be some minor punches in the gut, too, as we fight our way through. If that doesn’t make sense to you, I’m sorry, but that’s the truth.

Q: Does that mean there’s a chance Darryl won’t come back?

Like I said, the one thing that’s clear, as this was going back and forth, that issue of where we’re going and where we are is always there, right? But you’re still talking numbers and everything else, and you have this market out there that we’ve had to deal with. I think we’re all aware of those big contracts and things. So that part of the dialogue now is off the table. I think he’s comfortable with what’s there. I think it’s very fair, but just like when he came here, and just like when his last contract was up, you and everybody else [asked], ‘does he really want to do it?’ But I think it’s a little different now because of where we’re at. It’s a different challenge, just like I said that I have to adapt. Players have to adapt. Coaches have got to adapt. Scouts have got to adapt. It’s a smart thing. You want to hear where we’re going and what our game plan is, and it’s no different than when I first hired him. ‘What’s our game plan? What do you think? Do you want to coach a good team?’ But I think the money part, though, what I would say as of four or five days ago was that the issue of ‘what I’m worth’ and everything has kind of been off to the side now. You guys asked him that question two years ago, didn’t you? ‘Are you going back to the farm, or are you coaching,’ right? It’s the same thing right now. It’s not a money issue.

Q: But, Dean, every indication you’ve received, I would assume supports the fact that he does want to come back? Or have you received any vibes to the contrary? Because it seems like from what I can tell, it seems like a very nice fit in terms of himself and his family. Is that correct? Is that your take?

A: Yes, that would be my take, which is why I’m not concerned, like I said. Unfortunately, scouts are here first. They went through their seven days of hell, so to speak. You can call it ‘hell’ or you can call it ‘getting better and being stimulated.’ In the meantime, the coaches were dealing with all the players, right? So you had things going on here around the clock, nonstop. I even told him, ‘hold off.’ I said, ‘as long as the money’s there, we have to get together and really look at what we need to do to get this back. Because, quite frankly, I don’t have a problem with that, as I told the other scouts. If you’re not willing to buy into this, don’t work. It’s the same with the coaches. But also knowing that my experience with Darryl, it’s happened twice before when he came here. It’s the same question as when I first brought him here. ‘Here’s what we’ve got, here’s what the owners like, here’s what the game plan is, here’s our strength, here’s our weakness.’ Boom, he takes it. His contract was up last time. Same questions. I think it’s a little tougher, and the difference for both of us at this time is it’s safe to say we’re in uncharted waters. I think it’s safe to say when I brought him here that we had great experience building. We knew what we wanted and knew what we do. I think part of the problem is, like I said, the safety in doing things the same way after you’ve won, and this is a little – it’s not scary, but you see now what’s happened. We know we’re not where we want to be. The things that have happened were arguably predictable because of past history in other sports or whatever, and now you have to fix it. That’s a different challenge, probably, than any of us have faced because we had never won before. And I want it that way. This is no different than the first guys, the amateur scouts. Here are all these mistakes, here’s why, but the other thing too? I don’t think we got better. I think we had very good success and we were doing things the same way, and two things happened. Everybody else caught you, started copying you, whether it was drafting guys – all those guys, ‘oh, they’re crazy taking Simmonds, he’s been through two drafts.’ Well, that’s gone. Then you’ve got the issue of the layers. That’s all been taken over. Then you’ve got the issue of how you value it to move up. Well, everybody’s doing that, so what are you going to do, stand pat? There are tons of things we can do to get better, and what really helps is the use of technology. Technology doesn’t give you the answers. That’s the fallacy. The stat thing will never give you the answers, but it’s a way to find the answers yourself, and that’s the difference. And obviously, given how I started this off, we can never underestimate the importance of the chemistry and the emotion. We’ve talked about this from Day 1, right? Economic chemistry, spiritual chemistry. I ask you guys this all the time, right? You go into a room, and you all say the same thing. ‘Yeah, you can feel it. Yeah, you can feel it.’ Well, there’s that part there that doesn’t translate into stats, but I think it comes back to being the best you can be and pushing yourself, and that’s in the end what resonates. And there are ways we can push ourselves to get five percent better. I’m not as depressed now talking about it, because there’s been a lot of work. I’m getting fired up now.