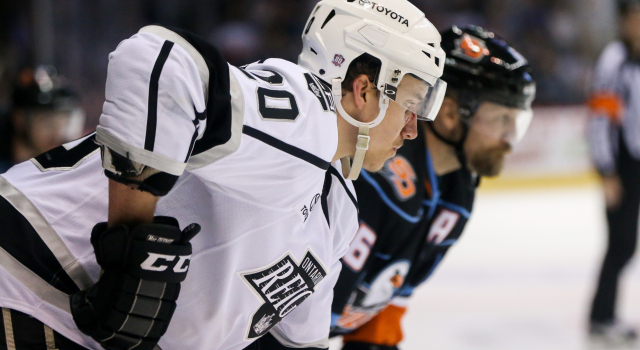 On Michael Mersch’s performance:
Well, those were Big Mike-type goals. He’s parked right in front of the net, and it’s a deflection, tip. He’s got a screen, a net-front presence. I liked the fact that our D just put pucks to the net. A lot of times they want to wind up and pound it and somebody adjusts and they get in the shooting lane or it doesn’t get through or they miss the net, and it’s just a matter of just getting pucks to the net. It’s not how hard they get there. It’s just if there’s enough traffic and some bodies, and that’s what Big Mike does. It was good for him, and he’s been contributing in a lot of ways, he just hasn’t found the back of the net. I don’t know if we’re through it yet – he hit the post with an empty net.

On the special teams performance:
Well, it’s one game. I think as we’ve talked about as a collective group, the emotion and the intensity of the playoffs sometimes get the better of you, and I thought both teams were pretty disciplined. And, now that you have this on recordings and video and everything else, the refs were pretty good. They let the guys play. I think that’s important, too. They weren’t whistling everything down and it wasn’t a steady stream of guys to the box. It was just call what needs to be called and let the players play. So having said all that, if you can stay on the ice, which is what we want to do – and I’m sure they’re probably thinking the same thing – you give yourself a chance.

On Michael Amadio’s play to set up Joel Lowry for a goal:
You know what? That was a great forecheck by him. The angle that he took on the guy he was going in on was terrific. He really kind of painted him into a corner with nowhere to go and jumped on the turnover. Actually, we were just getting a change. That’s important, too, is getting some offensive zone changes and keeping guys fresh, and Lows comes off the bench, and Biss comes off the bench. You know what? As good of a play as it was from Amadio and the composure to give it to Lows, I thought Lows did a real good job of holding onto it for just a split second and then was able to throw it upstairs. Real good play by a couple young guys, and your line that goes out fourth. Good contribution.

On the Jeff Schultz – Kevin Raine pairing
The pairings have been pretty solid all season long. Rainer’s been in, he’s been out. [Ebert’s] is in, he’s out. We’ve got a lot of guys who can play. Unfortunately you can only dress so many, but I liked our defense tonight. I thought they were all good. I thought they were moving the puck. There were only a couple of times that we got into trouble in the first period where we held on for a split second too long and spent maybe a little too long in our end, but the job of the defensemen is get back, get the puck and give it to your forwards. When you’ve got some good forwards like we’ve got, give it to them. Get them going, get them skating, get them going north. That’s what they want to do. I mean, why wouldn’t you want to give it to Kempe? I mean, give it to him. The guy just skates. It was good. And, you know what? To answer your question, yes, Schultzy and Rainer were solid.

On generating momentum from a second period penalty kill:
I don’t even really like to talk about special teams much because every time you guys bring it up it falls apart. It was good for one game. We had some energy, we had some jump on it, and we were able to get guys out and stay fresh and not get hemmed in our end, which is important. But again, you don’t want to give them opportunities on the power play. They live for it. I mean, you can see even when they pulled their goalie for the extra attacker, you can just see their guys coming off the bench, they’re like dogs frothing at the mouth. It’s just pure excitement as hell to be out there. So you don’t want to give them that. And I thought it was good. We got out to a lead, and we knew there was going to be a good push from them in the second period. There was. But again, the resolve and the net mindset of our guys is, ‘OK, let’s get back to work.’

On executing the game plan:
I thought our guys were good. But you know what? It’s a game that goes from two-nothing to two-two, and it’s a good team. They’re not just going to hand it over to you because you scored two goals. They’re going to keep coming at you. This series, it’s going to be fun to stand behind the bench, and I’m sure it’s going to be fun for you guys to cover it. I mean, it’s great hockey. Two great teams.

On Michael Mersch’s grandfather encouraging him to go to the front of the net:
His grandfather told him that? Well, let’s fly him in. Put him on the staff. Perfect. Get him a track suit and he can go on the ice and practice tomorrow and I’ll stay off. Sounds like a plan. [laughs] How old is he? He probably skates better than I do, anyways.

On whether momentum carries from game to game:
As far as I’m concerned, the game’s over, and that’s it, and there’s no momentum going into Game 2. It starts fresh. That’s just the nature of the game. Now, there are some momentum shifts over the course of the game. Yes, I would agree with that, and I think we saw some tonight. So there are small plays or subtle things in the game that maybe turn the tide. Maybe it’s a good shot block, maybe it’s a big play by a kid right out of junior that makes a play to a kid that’s in his first year and comes up with a timely goal for us. But there are a lot of things, and I don’t know if you can ever narrow it down to any one or two things, but I know one thing, it’s good to have won, but we’re already thinking about Game 2, and I’m sure San Diego’s not going to lose too much sleep because they know it’s a long series. One game means very little.

On Sam Herr and the decision to play him on a top line:
I thought he was good. I mean, that’s a tough situation to come in, and all of a sudden you’re exposed to this media hype that you guys put into this San Diego-Reign matchup. But I see him being as a guy like Merschy. He’s strong on the walls, he wins some puck battles, he’s not afraid to get into the corner or down low and in and around the net and make some plays for Dowder and Backs. He’s a bigger body. He’s a pretty thick guy, a pretty strong guy, and he goes about his job pretty quiet and unassuming. It’s almost like – and I’m not saying he’s Mersch-like, so don’t start writing that down – but you know what? He comes in like Merschy did and it takes a while to kind of see what he does. Nothing just jumps out of you and grabs you. You kind of watch him, and you go, ‘Man, he’s pretty good.’ He’s pretty good positionally away from the puck. So I think he’s only going to get better, and I just think it gave us some good balance on the lines. It gave us some size. We didn’t lose any speed, which is always huge because I want us to skate. Like, I want us to skate. I wish I could skate like Kempe. I wish we could all skate like Kempe. But you know what? When we’re going, we go pretty good, and I think that’s important for us.