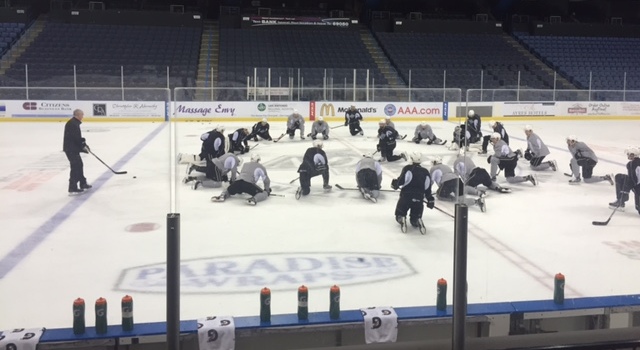 Head coach Mike Stothers, on what the main focus has been in practice:
It’s been a good week. We’re fortunate enough to finish up on Friday and give the guys a couple days — gave them Saturday, Sunday [off]. Then we came back in on Monday and didn’t go overly long Monday or Tuesday, but we got some good things done that we wanted to do. The pace was good, the guys seemed energized, they seemed focused. Wednesday was pretty short, worked on a little bit of power play. … I think it’s the perfect amount of time [off] probably for both teams. … Anything longer than this you start getting a little antsy and it’s like, OK, let’s get this series going. But I also think it’s important, with the schedules the way they are and the series 3 out of 5 and the motions and everything else, it’s good for the guys to have a couple of days, too. Hopefully we’re ready to go and as everybody’s predicting, hopefully it’s a good series.

Stothers, on Brodzinski’s injury:
Funny thing about that, he was on the ice. You noticed that? He was out there, Sutter was out there. So, that’s the beauty of the game.

Stothers, on Paul LaDue’s arrival:
I heard he was coming, I just didn’t know when it was. He arrived here this morning and we introduced ourselves and exchanged pleasantries and then basically we got ready to get focused on today’s game. He’s got a lot of players names and stuff to remember, there’s a lot of equipment to get organized, so it’s a day for him to just get acclimated. [Reporter: Anything in particular that you said to him?] Nope. [Reporter: Did you get the chance to watch him much on the ice?] No.

Stothers, on how his team can keep an even keel during a rivalry game:
It’s got to be right through the whole system. Myself and Chris on the bench as coaches, and then we’ve got some good veteran players. We’ve got a great core group. That’s basically what you do, you just try to keep everybody’s equilibrium on par. It’s easy to get caught up because the playoffs are so important to everybody. You’re exuberance can sometimes lead you down the wrong path to be a little too excessive. It’s just something that we’ve talked about all season long, whether we’ve gone through a good patch where we’ve won some games, usually don’t change our demeanor much. And then we had some stretches where we hit a sour patch and again, we didn’t let it consume us or overwhelm us, we just got ready for the next period or the next game and moved on.

Stothers, on how the Reign prepare in facing Matt Hackett vs. Anton Khudobin in net:
One of the strengths of their team has been good goaltending. They’ve had a lot of different guys in the net throughout the course of the year. They haven’t really taken any backward steps. Their goaltending’s solid. The team, the players that play in front of them are solid. Who knows? He could be ready for Game 2. Come 7 o’clock tonight, he might be in the net. You know what? It is what it is.

Stothers, on Backman, Bissonnette, Newbury not being out for morning skate:
Today’s morning skate was optional, and again just because we had Monday, Tuesday, Wednesday to practice. Now you’re looking at you’re playing three games in four nights. So, really, the morning skates are almost becoming obsolete anyway, certainly this time of year. I as a coach don’t feel the need or the importance of them. Some guys it’s just a routine or ritual that they feel they need to do. And to me it’s just another day of going on the ice, put your equipment on, maybe draw some energy from what you need, which is tonight at 7. … There’s some of the guys that I probably should have said it’s optional, except you’re not going on. Young guys, they know that it’s optional but it doesn’t really apply to them. So, it’s one of those that has dual meanings. Certainly with today being the first game and all, I want them to feel comfortable in doing whatever they need to do to prepare. I can’t speak for what works best for their bodies. That’s what they need to do, so if they felt the need to go on then I’m not going to deny them that. And if they need the time, I’m not going to deny them that either. It’s one of those ones, as a coach, you just want them to be as comfortable and as ready to go.