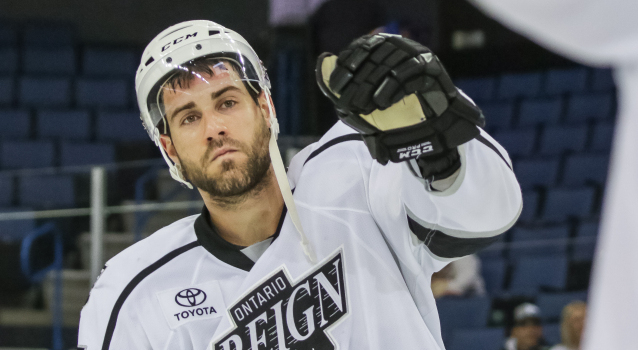 Michael Mersch, on the inspiration behind his two goals:
It’s funny, my grandpa Mersch calls me every Tuesday and he asked me why I wasn’t going to the net so much in the first series. And he was like, ‘did the coach tell you to do that?’ And I was like, ‘no, I should probably start going to the net a little bit more.’ If my grandpa’s telling me, I probably should do it. He watches all our games and supports our team a lot, very nice of him.

Mersch, on the tone of the series:
It’s going to be physical. You saw at the end of the game. It’s going to be a physical, hard-fought series. They’re a good team over there. With both the parent clubs being out, there’s some guys who’ve come down from those teams on both sides. Both really good teams, good systems. Just going to have to take it game by game.

Mersch, on winning the special teams battle:
They have a really good power play. We play ’em 12 times during the year so they know some of our tendencies, we know some of theirs on power play and penalty kill. Sticking to what we do. We’ve had a good penalty kill down the stretch and we’re going to have to continue. And then we score on the power play tonight, that makes a difference in the game, too.

Mersch, on the team’s all-around effort:
I thought we had a really good start. I think it starts with that and just keep going. You had all four lines going tonight and big guys stepped up. The line that goes out fourth had a good goal for us. That was a big turning point in the game. Amadio is a young guy coming in, gets it, makes a good play on the forecheck and gives Lows the puck and Biss is going to the net. That’s a big play, that’s a change-point of the game because they scored two goals to tie it up and the momentum was kind of going their way.

Paul Bissonnette, on his goaltender interference penalty:
I was going to the net. I thought it was the other guy’s stick who hit him and I saw the replay in the box and that’s what it looked like. My feet were in the blue paint, but [the refs are] human. … I think he might have been on the other side of the net so I don’t know if he saw it. Thankfully our penalty got it done and saved me one there.

Bissonnette, on the physicality and the closeness of the game:
It’s been like that all season. I don’t really see a reason for it to change, especially come playoff time. They’ve got a big, physical team and luckily we do, too. I think that’s kind of the Kings’ style and they draft accordingly and develop accordingly and luckily we can match that.

Bissonnette, on the pace and the Gulls’ comeback:
They’ve got some D who can move the puck and move up the ice. You saw, they’re pretty good at capitalizing on your mistakes. We were up 2-0 and we’re pretty much in control and then all of a sudden, wham, it was tied. You can’t fall asleep on these guys because they definitely have some guys who can put the puck in the net.

Bissonnette, on Lowry’s goal and the fourth line contributing:
It kind of eased off as far as their momentum was concerned. I wouldn’t say we were really on our heels, but I mean we were probably a little nervous after sliding the two-goal lead there. A great shift before us Mersch, Auger and I think maybe Kempe was their centerman at the time. And they had a great change and Amadio came right on, had a good forecheck, got a stick on it and their centerman anticipated it more up the wall and he just kind of left it. I was going to the net and luckily he hit Lows who has some finish and he put it in the net. Good thing he didn’t hit me.

Bissonnette, on the PK:
Stuttsy does a good job and as a four-man unit everyone’s usually on the same page. We’ve got some pretty big guys with some big sticks and some good sticks. Breaking up passes and lanes and even with our forwards, just good down-ice pressure.

Michael Amadio, on Game 1:
I thought we came out to a good start. We were skating really well, and I thought our work ethic was great over the three periods.

Amadio, on teaming up with Joel Lowry for a second period goal:
I just saw that the defenseman turned over the puck there, and I saw Joel coming in off the bench. He was wide open, and I had the D right there, so I gave it to him, and was fortunate enough it was in the back in the net.

Amadio, on his first professional games, and whether San Diego is more physical than San Jose:
Yeah, I think it was a little more physical, this series. Guys are always finishing their checks, so I think that was the biggest difference for me.

Amadio, on the change of momentum in the second period:
A little bit. I think we knew that they were going to come out hard after the first, so we were prepared, and we just knew that we couldn’t give up and we had to battle back.

Jeff Schultz, on the difference between the team now and where it was one year ago at the time:
The teams are pretty similar. Maybe not as many returning guys as in all teams, but a lot of guys remember what it took last year, round by round, and I think we’re using that experience from last year of not getting too high or too low with the way series are going and stuff like that, so I think that’s going to really help us move forward here.

Schultz, on imparting composure to the young players on the team:
I’m sure a lot of these young guys don’t expect to be put in the lineup, and I think the older guys and the coaching staff are doing a good job in getting them acclimated to our system, the way we play, and putting a lot of pressure on ’em to get up to snuff and be ready to go.

Schultz, on his empty-net goal:
I was just trying to get a good gap. They had five or six guys out there, and it was just kind of an errant pass from their guy, and I wasn’t going for the goal, I just wanted to clear it down and kill some time off, and was fortunate it had a little turn on it and went in.