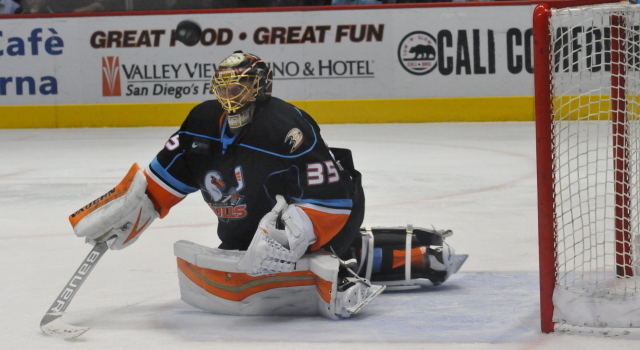 A few hits from around the social world for today …

–Gulls starting goalie Anton Khudobin is day-to-day according to Craig Elsten of The Mighty 1090 AM in San Diego, who does play-by-play for the team.

At @SDGullsAHL morning skate, full participation for @brandon_montour, while @HarryZ87 also worked on ice with the varsity. No Khudobin.

Video of the collision can be found in this video at the 30-second mark:

If Khudobin cannot play in the series opener on Thursday, it would be a huge loss for San Diego. Khudobin has been with the Ducks and Gulls this season and went 5-2 against Ontario.

–According to Sheng Peng from Jewels from the Crown, both Vincent LoVerde and Ryan Horvat were out skating today in red no-contact jerseys. Horvat has not played since he sustained an injury in Game 1 of the San Jose series. Jonny Brodzinski also did not skate.

Horvat in red no-contact came out during 2nd wave of practice. Amadio & Herr, who were w/ vets, stayed out for extra work

–Really had fun reading this story from the Fargo Forum (the local newspaper where I went to college!) breaking down the University of North Dakota’s NCAA win. Great read, and some fun tidbits on Paul LaDue in there as well. Enjoy!