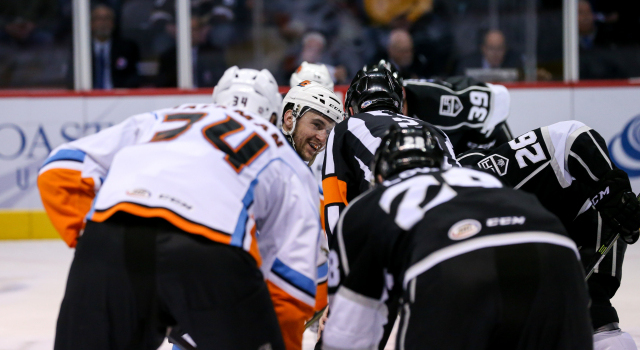 [Updates with comments from team president Darren Abbott as of 1 p.m. PT]

Reign head coach Mike Stothers said he won’t comment on it again, but chose one word to describe his team’s second round 1-1-1-1-1-1-1 best-of-7 playoff schedule against San Diego: “Brutal.”

Released shortly after the Reign’s series-clinching Game 4 win on Friday night over San Jose, the schedule is as follows:

The reasoning? Scheduling conflicts at both buildings. Citizens Business Bank Arena was previously booked up for various worship and sporting events on May 6, 7 and 13 as well as graduations.

“Playoff scheduling is a balance of building availability, rest for the players, economics, competitive advantage and travel,” team president Darren Abbott told ORI via email on Saturday afternoon. “As a general rule, building availability gets tougher the deeper you get into the playoffs mostly due to graduations. Our building is wonderful to work with, but it is no different. Unfortunately, we do not have ice this weekend.

“When we put together a playoff schedule we work closely with the other team to attempt to check as many of the above boxes as possible. In this case we looked at two other scenarios, one of which had us squeezing seven games in to the first 11 days, while the other had a four in five scenario at the back end (a nonstarter). This scenario allowed us to maximize the weekend dates in both cities for our fans and give our players adequate rest over the seven game span.”

One AHL employee said irregular schedules due to building availability are nothing out of the ordinary.

The distance between CBBA in Ontario and San Diego’s Valley View Casino Center is, ironically, 111 miles. So as the teams go back-and-forth hosting one game apiece they’ll be facing bus rides of just over two-hours, less than two if traffic is friendly on the 15 freeway.

“One-1-1-1-1-1-1, it’s crazy,” said Stothers. “I know there’s reasons for it but I don’t get into those reasons. Players association, I don’t care about things like that. I care about the integrity of the game and the way it should be played. Should be a 4 out of 7, should be a 2-2-1-1-1. … At least we’re pretty familiar with that drive down the highway to San Diego, so it is what it is.”

The Reign went 4-6-1-1 against the Gulls in the regular season, the only team Ontario had a losing record against.

“I guess we’ll just figure that out when it comes to it,” said center Nic Dowd, who didn’t care to dive in on the scheduling topic.