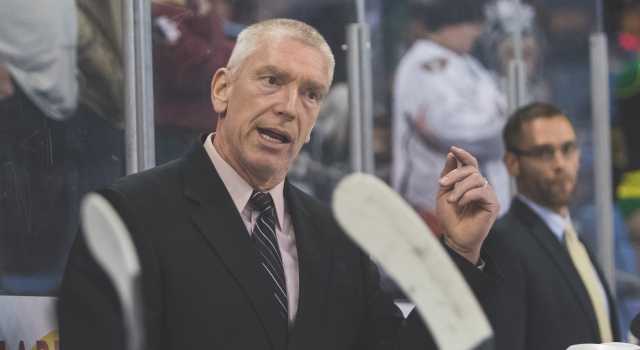 On the feeling overall after clinching:
It feels pretty good. It feels real good. I’m real happy for the guys. That was a tough series. You look at it and it was a tough regular season against those guys. The record doesn’t indicate how hard it was. That’s a good team and they played us well. I’m happy for the guys. There’s some guys that had some success last year and it’s good to keep it going as long as possible and there’s some guys that this is their first taste and their first test of playoff hockey. It’s San Jose, it feels good.

On how playing San Jose 12 times in the regular season factored into the series:
It’s good and bad that you’re familiar with them. If you play a team 12 times and you have to log through all the video you have on that particular team, and then condense it to show the guys, that’s why my eyeballs are hanging out of their heads, it’s unbelievable. … It was so hard fought. You never want to go to the final game. It’s a 3 out of 5, but you never want to go to the fifth game. Four out of 7, you don’t want to go to that seventh game. I was happy for the guys that they were able to get the last one, which is the toughest one. Give us a little bit of time to prepare for our next opponent, which I think is San Diego. So, we’ve got some time to heal up and get ready for the next round.

On having Crescenzi back in the lineup:
That was a game-time decision. … That went right down to the wire. We talked to Cres extensively to see if he was OK and he was comfortable. That’s the first and foremost, and believe it or not, put the player’s health first and foremost. If they have any reservations about being able to play or not re-injuring themselves or doing further damage, then they don’t play. He said he was able to do what he could do and it actually started today after our morning skate. … He went out after San Jose did and went through some work, taking draws and doing some movement and he said he was OK. And then it’s like, OK, well, how are you going to feel a couple hours later? So, he came in, he went out for warmup. Geez, looks like a great call, actually. Yeah, that was good for him. That just shows you how bad he wants to play. Guys want to play so bad in the playoffs, right? It’s hard. You’re missing guys that take faceoffs, you saw tonight, we were exposed a few times. [Reporter: How much do the trainers have a say?] We’ve got a great trainer in Muirsy and he does everything he can to get the players on the ice as quick as possible, but nobody knows their body like the individual. And sometimes the individual, depending on who it is, isn’t always forthright in how good he is feeling because they want to play so bad. So, it’s also knowing the players and are they really OK or they just telling you what you want to hear and what they want to hear? But it’s still a calculated risk. Say Cres goes out and can’t finish the game, now we could have had a perfectly healthy body in there. And you could look at it and go, OK, well, could have had two days and maybe if there is a Game 5 he would have been better for that one. I don’t like to live that way. I like to live like there is no tomorrow, let’s get it done.

On how important Auger’s goal was to give the Reign the lead again:
It was pretty good, pretty important. It’s weird. Again, there’s times on the bench when you get a sense or a feeling that maybe things are getting a little unraveled, or a little unglued, and there wasn’t that tonight. … You can kind of read off the players and their demeanor and if they’re not getting overly excited or concerned about it then you can tell by the way you’re playing. I was pretty happy with the way we played these last two games. That was pretty impressive. [Reporter: Are you happy they were able to stay even-keeled?] Yeah, that’s part of what we try to strive through all season long. That’s what you do, you play the regular season to prepare for this right now.

On Kempe playing center and him being able to utilize his speed:
I like his speed. It just seems that in the last couple games he’s utilized it more. I look at an individual that has that capability and if you watch him and you come to practice every day and you watch him, and he’s on the wing, which he has been most of the year, you’re blown away. He just gets around the ice, it’s effortless. It’s Mach 1. It’s incredible the way he can skate. The last two games, maybe the fact that he knew that we needed a big effort and big performance out of him because we were short on centers, maybe he brought it out. … Maybe he’s just one of those guys that elevates his game during the playoffs. There’s a lot of guys, the regular season’s important to them, but the playoffs, that’s what gets their juices flowing, they’re money. I’m not saying he’s Justin Williams, but you know what I mean, he’s a big-moment player. I don’t want to anoint him this soon, but my goodness, he is fabulous to watch.

On beating Dell:
He’s a difference-maker in the series. He’s good. I think what got maybe to him … it wasn’t overflowing, the net wasn’t bulging all the time, but the traffic. The ones where we got in front of him and there was the second or third opportunity, I think those things were quite helpful to us. The net-front presence and that constant pressure. Crescenzi gets in, gets a good forecheck and bumps their guy off the puck. Big Mike reloads through the middle and gets over top of the puck and Augs, he stuck with the puck. He just stuck with it. Instead of us peeling away and looking to go back, we were concentrated. We stopped. That makes it tough for a goalie.

On Auger’s performance:
He’s another guy that’s a little bit of a sleeper. We don’t talk about him enough. You guys don’t talk about him enough. I can say he’s really grown and you’re going to say, well he’s 6-9. But his development and where he’s at right now, this guy’s come a long way. You always as a coach, in your mind you pick guys on your team that you think are going to elevate their play, he was one of them. I think this is Augey’s year to step up.

On the first round best-of-5 series:
Just because we won and advanced, still think it sucks. Should be 4 out of 7.

On the 1-1-1-1-1-1-1 format coming against San Diego:
It’s brutal. 1-1-1-1-1-1-1, it’s crazy. I know there’s reasons for it but I don’t get into those reasons. Players association, I don’t care about things like that. I care about the integrity of the game and the way it should be played. Should be a 4 out of 7, should be a 2-2-1-1-1. The team that finishes with the higher seed should have that seventh game at home. Having said that, that’s the last time we’re going to talk about it because it’s not an excuse. At least we’re pretty familiar with that drive down the highway to San Diego, so it is what it is.