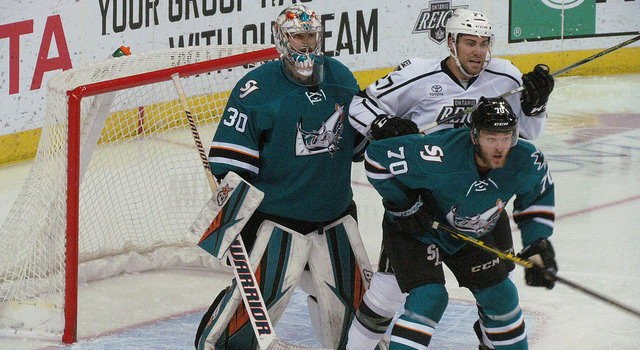 –The Reign have won the best-of-5 series 3 games to 1 and advance to meet San Diego, victors over Texas, in the next round of the Calder Cup Playoffs. San Diego eliminated Texas in a 6-2 win on Friday night. Game 1 is Thursday night in Ontario and the series will feature a rare 1-1-1-1-1-1-1 format. The Reign went 4-6-1-1 against San Diego in the regular season, the only team they had a losing record against.

–Nic Dowd, who had at least a point in all three wins, led the Reign in scoring in the series with two goals and two assists in the four games. Jonny Brodzinski (2 G, 1 A) and Andrew Crescenzi (1 G, 2 A) each had three points apiece. Crescenzi was also a team-high plus-4.

–The Reign finished a perfect 9-for-9 on the penalty kill in the series and went 2-for-2 in Game 4.

–Peter Budaj improved to 3-1 in the playoffs by making 18 saves.

–Here’s how the Reign aligned in line rushes during warmups:

–Jonny Brodzinski’s younger brother Michael, a defenseman, made his AHL playoff debut with San Jose and finished minus-2.

–Full highlights can be found here:

–Tough guys Paul Bissonnette and Alex Gallant drop the gloves 1:49 into the contest:

–Nic Dowd makes it 1-0, roofing a rebound for his second of the series in at 9:12 of the first period:

–San Jose ties the game after a long Barclay Goodrow shot is tipped by Jeremy Langlois and gets by Peter Budaj midway through the second period:

tips a Goodrow shot to tie the game! #EndTheReign pic.twitter.com/LZvHnJvzGw

–Justin Auger puts the Reign back ahead at 2-1, 3:14 after the Barracuda tied it as he and Andrew Crescenzi battle to keep a Michael Mersch rebound alive. Auger finds it and buries it over Dell:

–Jordan Samuels-Thomas sends a laser over Dell’s glove after Auger chases down his chip-in and forces San Jose to cough up the puck in the third period to extend the Reign’s lead to 3-1: