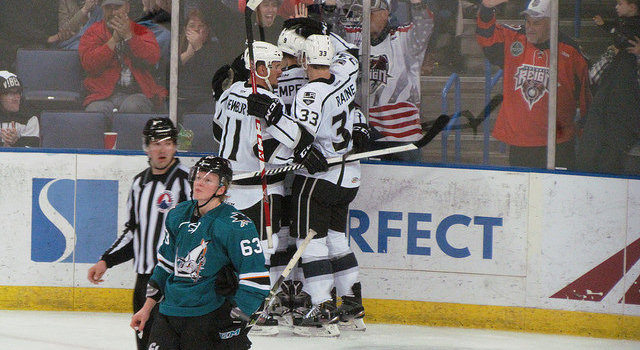 On being able to wear down San Jose:
We had some guys that stepped up in a big way. Newbs played extremely well for us, Kempe looked great in the middle, gave us some real good minutes and a real good game, and Amadio, you know what, did a good job for his first American Hockey League game — the playoffs — thought he did a real good job.

On the physicality of the game:
It was a playoff game, hard-fought. Neither team was going to give an inch. We wanted to establish something being back home and we want to be a team that’s hard to play against at home. So, you know what, it was good. It was one game and now we’ve got to get ready for tomorrow.

On Kempe’s play being on the upswing in the playoffs:
I don’t know, he seems to like the playoffs. He stepped up his game last year for us. Maybe he’s one of those playoff guys, might want to keep that in mind for future playoff pools.

On the JST-Amadio-Auger line and the game being a physical one:
I liked the heavy bodies that Auger and JST provided. I liked Amadio in the fact that he made some plays. He looked fairly comfortable in his first action. But, you know what, having J on one side and Augey on the other kind of helps that, settle it down, some big bodies that are pretty good in all areas of the ice and all zones of the ice. It was a good fit for tonight and we’ll see where we are tomorrow and how our lineup is when we come in tomorrow and reevaluate. It was a hard game … I’m sure both teams are feeling it tonight or maybe more so tomorrow.

On if Kevin Gravel is OK after taking late hit in the third:
He’s fine. Can’t stop that big guy.

On the top players like Dowd and Mersch coming through:
That’s what they do. That’s your high-end guys and they don’t go too long without creating things. We needed them. I’ve made mention of Newbury and Amadio and Kempe, but I thought everybody was really good for us tonight. And you can always count on those guys to come through for ya. Dowder doesn’t score on the penalty shot but he was really close, there was some room there in the five hole, he just hit the top of the pad. So what does he do? He doesn’t get frustrated, he doesn’t get mad, he buries one on the power play.

On if there was anything different on breakouts that made them successful:
No, it’s the American Hockey League. Every night’s different from one night to another. That’s the way it is. It was a good night. That’s as far as it goes, we’ve got to get ready again tomorrow. Quick turnaround and two good teams, two banged-up teams, two teams that are not going to give an inch.

On the message going into tomorrow:
You’re going to have wait till tomorrow. I don’t know, I haven’t thought of it yet. I’m just trying to enjoy a little bit of — that’s tough. It’s tiring for everybody. It’s physically, mentally exhausting for them and it’s exhausting as a coaching staff. So, you take a little time and reflect, come in tomorrow with a clear head, look at some video, see what we can improve upon, see what we can do better. See what maybe we have to do to counteract what they’re doing. After a game, I’m sure my wife will beg to differ, but I just let it go. That’s not true, but there’s no send dwelling on it. We just worry about it tomorrow when we come in and we’ll figure it out. First of all, you’ve got to see who’s healthy, who’s not, try and put the lineup together and I guess to take any speculation out, yes, Budaj’s playing tomorrow.

On Amadio’s game and if there was any message for him:
He’s had a couple days of practice with us so he’s kind of familiar with where we are and how we play. He’s had some development camps and he’s had exhibition and training camp so it wasn’t totally new to him. So, just told him to go out and play, relax and play. I can stand here and say to ya, relax and play, you know he had some nerves, he had some jitters. But he certainly controlled it. It didn’t look like it. Maybe it’s part of his personality or maybe he’s just a pretty good player. He got 98 points in junior, so he must know what he’s doing. First one was good, we’ll see how the second one is.

On what the team can improve on for Game 4:
There’s always something to improve. We got scored on. We didn’t play the perfect game, yet. No team ever has, but you know what, they made a couple of adjustments. There were some things that we noticed that you want to make your players aware of. There’s things I think we could have executed a little bit better, so, that’s what you do. You might go through the tape and find that there’s nothing that’s glaring but there’s little things that you can always plant the seed. What do expect, what not to expect. I’m sure their coaching staff is doing the same. Roy’s pretty good, he’s coached over a 1,000 games of whatever he’s got, and climbing.