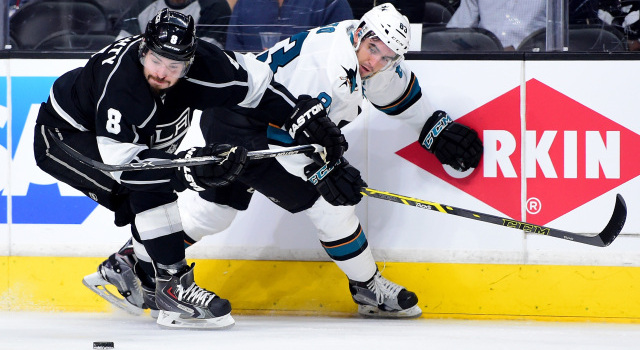 Surprise! Drew Doughty is a Norris Trophy finalist, as are Erik Karlsson and Brent Burns. The race to garner support to be acknowledged as the defenseman who “demonstrates throughout the season the greatest all-round ability in the position” evolved into a two-boat race midway through the season, at least according to those who make their opinions heard – frequently – on Twitter. And before this turns into a Doughty-Karlsson conversation, hey, let’s acknowledge how terrific of a season Burns had. The timing might be tough, given the results of Los Angeles’ first round playoff series, but, Burns had a phenomenal season, totaling 27 goals and 75 points, and recording 353 shots on goal (!), the most by a defenseman in 20 years.

So. The two-horse Doughty-Karlsson race. The last time the conversation was re-aired on LA Kings Insider, it was when Dean Lombardi advocated for keeping the media out of the voting process.

“It’s a classic case where greatness is [in] the subtleties,” Lombardi said of Doughty earlier this month. “And that number one defenseman, what makes him special, unless you really understand the game and see some of the things he does, you have to study the game, not watch the game and realize what he does is really special, and it has nothing to do with the highlights and the points and all this stuff. Every general manager knows it. 99% of the players know it. It’s not a highlight film position. It’s not supposed to be. And we turned it into [that] because Paul Coffey, I guess, pulled it off. But at least Paul Coffey was at least in the playoffs.”

Whoa, that’s a nasty Karlsson burn! The Senators did not make the playoffs this season, and that criteria may have influenced voters last year, when Doughty actually received more first place votes than Ottawa’s franchise defenseman but was absent from 31 different ballots as Los Angeles missed the playoffs.

Doughty also finished in third place for the 2010 Norris Trophy after a 16-goal, 59-point season, so this is the third time he has been a finalist. Karlsson has won the award in both 2012 and 2015, while Burns has never won (and no Shark had ever previously been a finalist). Heavily due to Nicklas Lidstrom having won it seven ties, the trophy has been awarded to a player in the Central or Eastern Time Zone for 16 straight years since Rob Blake became the only King to have won the Norris when he was presented the trophy in 1998. Hopefully players like Burns and Oliver Ekman-Larsson receive growing consideration alongside the regular favorites in coming years.

This year, Doughty appears to have a hungrier backing in the media, perhaps because there does appear to be sentiment that he’s “due” for the award, given his consistently excellent play, year-after-year. Observers began praising his well-rounded game in earnest during the 2011-12 season, especially in the team’s title run as his defensive credentials – particularly his physicality and ability to control the pace of a game – began drawing more notice. Prior to this season, the team wanted to see him assume a tighter grip of the team’s leadership reins, and all indications are that he did so, though there can be question thrown into the post-Game 3 pronouncement that the Sharks were “thinking a little bit about it now, so we’re right where we want to be.” Independent of perhaps providing some bulletin board fodder during a playoff series, Doughty showed a better commitment to training and conditioning, continued to serve as a vocal and emotional leader of a good team, and wore an “A” on his jersey for the first time in a regular season game.

But intangibles – “leadership!” “desire!” “competitiveness!” – aren’t exactly calculable, and that’s where, if you’re an east coast voter who doesn’t regularly stay up until one in the morning to watch west coast games, you’ll probably be more inclined to vote for Karlsson, who’s numbers are simply better. Not only are his primary numbers better, but his advanced stats and possession rates, which depict the Senators’ night-and-day flux when he is on and off the ice, leap off the page when compared to Doughty’s. Ottawa’s CF% when Karlsson is off the ice is 44.22, the lowest CF%-Off in the league outside of eight players on the Avalanche, a team that had the worst possession rates in the league. Karlsson’s +7.22 CF%-Rel ranked sixth in the league, compared to Doughty’s +4.42, which ranked 36th.

But if you’re going to use hand-picked analytics as your be-all, end-all formula for determining who deserves the Norris, you’ll arrive at a faulty conclusion. The trophy isn’t awarded to the player with the best possession rates, but rather the player with the “greatest all-around ability” in the position, and Doughty, who was excellent at both ends of the ice – though his 0.65 five-on-five points per 60 minutes ties him for 78th in the league, compared to Karlsson’s league-leading 1.56 5×5 Pts/60 – has profoundly more depth to his game.

On the other hand, 82 points in 82 games from Karlsson is simply incredible. He led the league with 66 assists and finished seven points above Brent Burns, who ranked second amongst defensemen with 75 points. In terms of cold, hard production, Karlsson’s season borders on historic.

But racking up points, though it helps a team win, isn’t the primary responsibility of a defenseman, and it’s much easier to find other players who can create offense than it is to find those who fit Doughty’s multi-faceted skillset and the ability to make small, practically unseen, nuanced plays to create space for himself or a teammate, or to buy himself more time to advance the puck. As for the metrics, Doughty did excel in limiting shots and goals against at even strength, finishing third in the league amongst defensemen with a 56.7% on-ice shots-for percentage and seventh amongst defensemen with an average of 25.4 SA/60. Despite regularly seeing the ice against the opposition’s top players (though also buoyed by Los Angeles’ structure and team play), Doughty’s 1.65 GA/60 was tied for seventh in the league, better than the placement of Burns and Karlsson.

“They’ve got a nice, solid, strong hockey team there, and sometimes you start to undervalue the individual because the goaltender can do some great things and they have powerful forwards up front,” Winnipeg coach Paul Maurice said when asked about Doughty prior to the Kings-Jets game on March 24. “I’m not comparing the style of play, but you had to watch Nick Lidstrom play a lot of games before you fully appreciated how great he was, not because he wasn’t going coast-to-coast and he wasn’t “spin-o-rama.” He was just making the right play. So slightly different styles, but in terms of value to a team, a guy who can play that many minutes, play against the other team’s best and at the same time generate numbers on a bit of a defense-first [team] – I think five-on-five we’ve scored as many goals as they have, [but] our records aren’t even close to being the same because there’s a different structure to what they do – he’s one of those players. I don’t know if it’s fully appreciated. I don’t think it’s a bias. I think it’s just human biology. People go to bed early. You don’t watch the third periods of a lot of games when you’re on the east. This guy’s a dominant defenseman in this league, dominant.”

Trophy winners will be revealed at the NHL Awards in Las Vegas, Nev. on June 22. 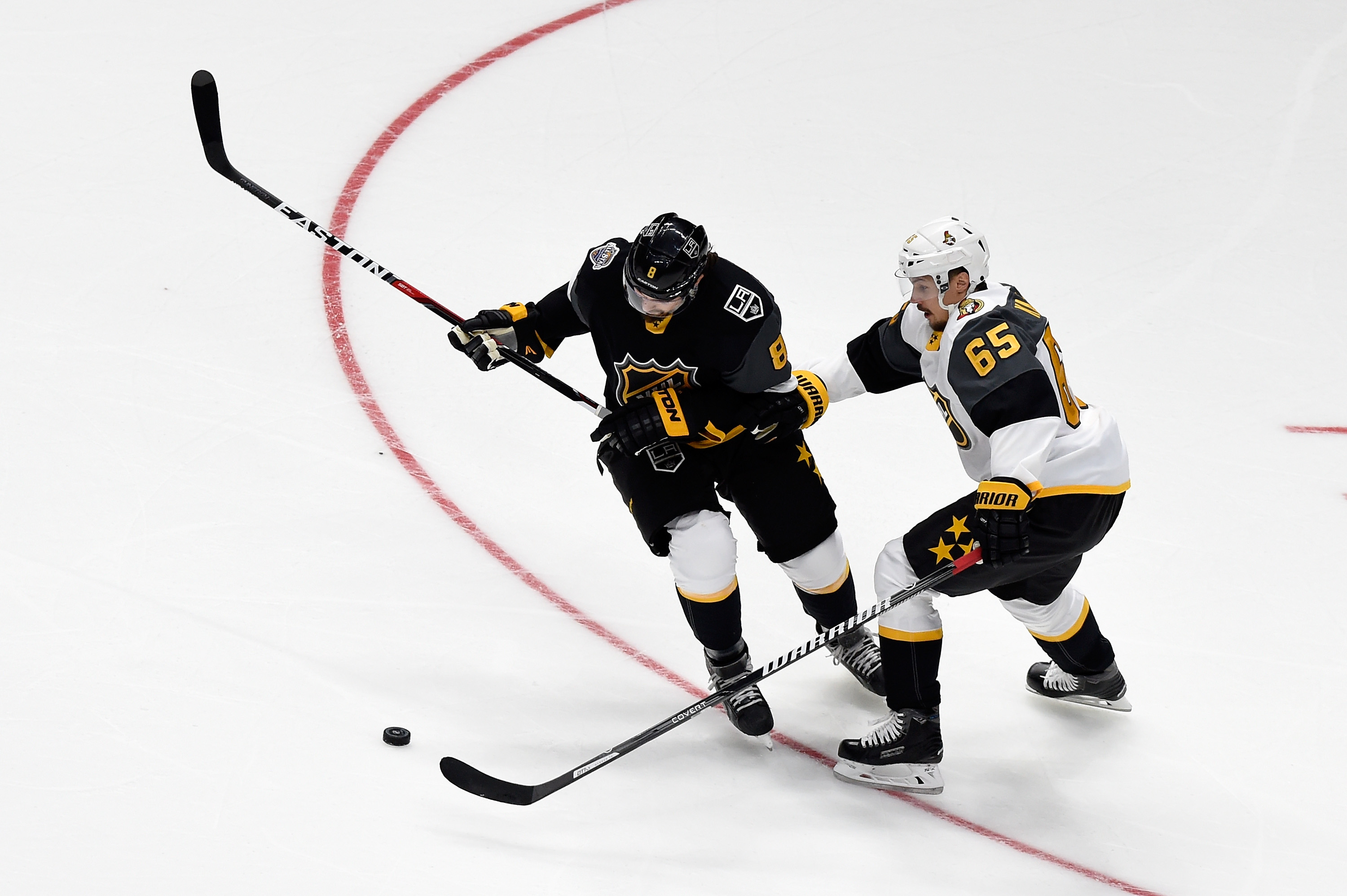