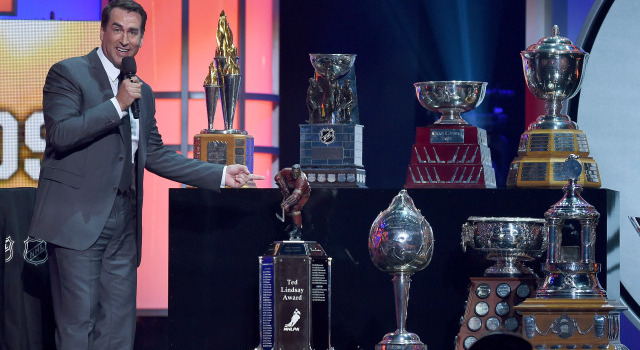 Wednesday’s announcement that Jonathan Quick, Braden Holtby and Ben Bishop are finalists for the Vezina Trophy opened up an 11-day stretch in which finalists for league awards will be announced. Expect the majority of these announcements to be made on nationally televised pre-game shows of playoff games, late in the three o’clock hour Pacific Time. Because Anze Kopitar is a safe bet to be a Selke finalist and has a strong chance at being listed as a Lady Byng finalist, and because Drew Doughty is a shoo-in to be named as a Norris Trophy finalist, members of the Kings should feature prominently over the first four days of awards announcements. It could also be said that it would be a good idea to stay off Twitter in the late afternoon of Friday, April 29, unless you’d like to hear the same recycled advocacies of Doughty or Erik Karlsson that have dominated the conversation about awards voting since the middle of the season.

The presentation of league awards will take place at the Hard Rock Hotel and Casino in Las Vegas on Wednesday, June 22. Will Arnett will host the ceremony, and LA Kings Insider will be on hand to provide coverage.

Wednesday, April 27
Vezina Trophy
-goalkeeper adjudged to be the best at his position as voted on by NHL general managers

Thursday, April 28
Selke Trophy
-forward who best excels in the defensive aspects of the game as voted on by the PHWA

Friday, April 29
Norris Trophy
-defenseman who demonstrates “the greatest all-round ability in the position” as voted on by the PHWA

Saturday, April 30
Lady Byng Trophy
-player who exhibits the best type of sportsmanship and gentlemanly conduct combined with a high standard of playing ability as voted on by the PHWA

Sunday, May 1
Masterton Trophy
-player who best exemplifies the qualities of perseverance, sportsmanship, and dedication to hockey as voted on by PHWA

Monday, May 2
Calder Trophy
-most proficient in his first year of competition in the NHL as voted on by the PHWA

Tuesday, May 3
NHL Foundation Player Award
-player who “applies the core values of (ice) hockey—commitment, perseverance and teamwork—to enrich the lives of people in his community”

Wednesday, May 4
Mark Messier Leadership Award
-player who exemplifies great leadership qualities to his team, on and off the ice; selected by Mark Messier after nominees are solicited from fans, clubs and NHL personnel

Thursday, May 5
Ted Lindsay Award
-most outstanding player as voted on by the NHLPA

Friday, May 6
Jack Adams Award
-NHL coach judged to have contributed the most to his team’s success as voted on by NHL broadcasters

Saturday, May 7
Hart Trophy
-player judged to be most valuable to his team as voted on by the PHWA

Other league dates of note:

Here are the Percentages for the Draft Lottery…Remember, the Lottery this year will select the Top 3 Positions. pic.twitter.com/nmKrNEiXPj