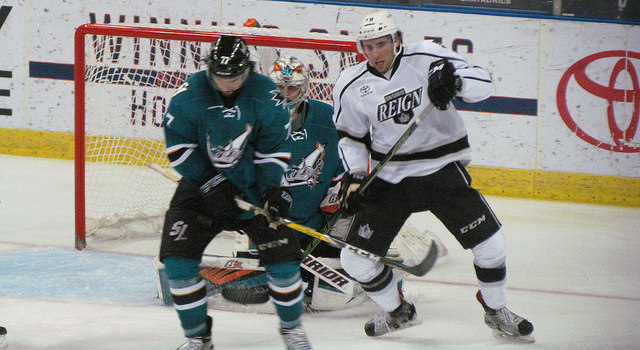 Adrian Kempe, on his game overall:
I think it was a good game for me. I think I started the series really good, too, and I had a really good first game. Had a pretty good second game, like the whole team, but I felt great out there tonight and had a couple of opportunities and I scored on two of them, so that was good for me.

Kempe, on playing center instead of wing:
I like to play center, I’ve said that before, too. I like to get low and get my speed going and get the puck to the middle. I got it a couple times and I think we had a couple good breakouts there. I think I played pretty well in the D zone as well. The whole game was pretty good.

Kempe, on the team effort:
The team played a really good game, played great penalty kill, good power play as well. In our zone they didn’t get as many chances as we got in their zone so I think the whole team had a great game tonight and we got a couple of goals and we let the one goal at the end but I think our D zone play was great the whole game.

Nic Dowd, on the complete team effort:
I think everyone enjoys it when we can roll four [lines], it gives guys breaks and allows guys to play more energetic, a better game all around. Better special teams, was really good, talked about that earlier in the week. Power play came through and our penalty kill was good and Budes was good in net.

Dowd, on the Reign having jump:
I thought we played well. Coming back home, this is the first home game we’ve played in a while, it was nice to be here. The energy was in the locker room before the game. I think it was a must-win tonight and so will be tomorrow.

Dowd, on why the Reign had more space in this game:
They’re a challenging team to play, I can’t say that anything was done differently throughout the week. Maybe guys just created a little bit more space for themselves by pushing pucks and using our speed as opposed to slowing down and possibly letting their guys get above and maybe trap us in the neutral zone. They’re still a really good team. They still close off a lot of space and, like I said earlier, they’re good through the middle. It’s going to be a tough game tomorrow.

Dowd, on San Jose pulling Dell late:
I wouldn’t consider that we chased him by any means, he made some really good saves tonight and I thought he played well. Guys did a good job getting to the net and we scored some goals. Budes played well and for whatever reason, I don’t know what they were thinking, but I thought after he got pulled we continued to do a good job getting pucks to the net on the new goalie.

Dowd, on getting traffic in front of Dell:
I think in San Jose we had 35-plus shots and we held them to 22. Tonight was even less. Big difference would be that we had traffic tonight and we had second-chance opportunities. Our goal on the power play was a rebound, Kempe’s obviously was a rebound in front on the first one. Those are huge. There’s something to be said [when] you take 40 shots but if he sees everything and no second opportunities that’s probably a pretty easy night for him.

Dowd, on the message going into Game 4:
Just get some food in us, get some rest and report tomorrow morning, probably watch some clips and get ready to go. It’ll be a quick turnaround.

Mike Amadio, on his first impressions of the AHL:
It was a little nervous to start obviously my first couple shifts was just getting out the nerves but after that I felt a little more comfortable and was able to play my game.

Amadio, on his line with Jordan Samuels-Thomas and Justin Auger:
They talk a lot on the ice, so they’re really good with directing me where to go and where I need to be. They work really hard out there so I was just trying to match their intensity.

Amadio, on if there was any message from the coaching staff going into the game:
Just go out there and play your game. Try not to give them time and space and I thought we did a good job of that tonight.

Amadio, on the pace:
It’s a little different, obviously [than] back in junior. It’s a little bit faster up here so the first couple of shifts I was able to get acclimated to that pace and I think it was good.

Amadio, on if going from the OHL playoffs to the AHL playoffs helped with the transition:
In a sense, yeah. I think it’s a little harder here. Obviously the guys want to win and it’s a tough environment out there.

Amadio, on the physicality:
It was a lot different than what I’m used to, obviously. Guys aren’t finishing their checks as much in junior so every time you have the puck you know that you’re going to get hit eventually.