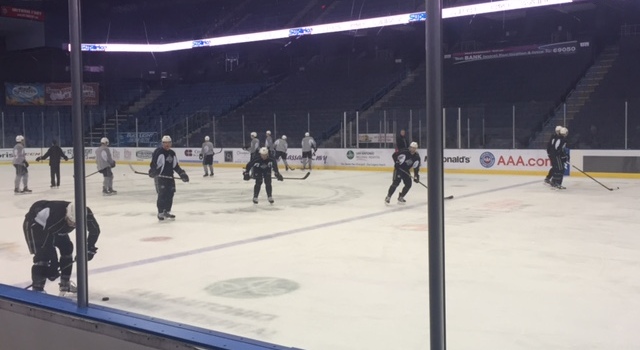 Some notes from today’s quick optional morning skate before the Reign host San Jose at 7 p.m. in Game 3 of their tied best-of-5 series.

Head coach Mike Stothers did not budge on the status of either Horvat or Crescenzi, and when asked about the centermen said, “we had a few guys who didn’t skate this morning, it was an optional, we’ll see.”

Center Brett Sutter was on the ice after having a few maintenance days early this week. There were no line rushes and there will be a better idea of the official lineup of who’s in and who’s out after warmups.

–With the injuries to Crescenzi and Horvat, it’s looking more likely that Mike Amadio will make his AHL debut tonight if both can’t go.

“He was out there this morning, so there’s a good chance,” said Stothers when asked if Amadio would play tonight.

Both Crescenzi and Horvat were seen coming out of the locker room in workout clothes after morning skate.

The 19-year-old Amadio concluded his Ontario Hockey League season with North Bay earlier this month. He had 50 goals and 48 assists in 68 games this season and added 12 goals and 6 assists in 11 playoff games.

“I’d say I’m a 200-foot guy with an offensive touch,” said Amadio, when asked to characterize his game. “But tonight I’m just going to make sure that I have my complete level there. It’s the next level so I’m just going to be working as hard as I can out there.”

Amadio, on his first full week skating with the Reign’s regulars:
It’s been good, obviously. The pace out there is a lot different than junior so I got a little taste of it last week and this week it’s been a lot better.

Amadio, on if the coaches have talked to him about being ready to go:
Yeah, for sure. They told us last week when we came here, ‘you guys are part of the team so just prepare yourselves and you never know what could happen.’ Obviously I’ve been preparing and just waiting for something to happen. Unfortunately you never want to see a guy go down but they did so someone’s got to come in there.

–Goalie Peter Budaj was first off the ice and it’s expected that he will make his third straight start.

–San Jose took the ice for their morning skate shortly after the Reign. The Barracuda arrived in Ontario on Wednesday.

Mike Stothers, on the key for tonight:
Just play, play 60 minutes. Doesn’t matter how you start it’s how you finish, that’s all.

Stothers, on what this week was like for the team to regroup:
It was fine. It was good to have a couple days of practice, good to get some days of recovery for the players. But then it starts getting long and you’re anxious to get going. It’s almost better if you can just play every other day. But, that’s not the luxury we have in the American Hockey League and certainly rink availability and what not plays into it. But if you ask anyone this time of year, playing every other day would be great.

Stothers, on being back home and the importance of Game 3:
Every game’s important in a 3 out of 5, so we just prepared for this one like we did Game 1, prepared for it like we did Game 2. I don’t think we’re certainly taking anything for granted because we’re back home, that means nothing. Just play the game.