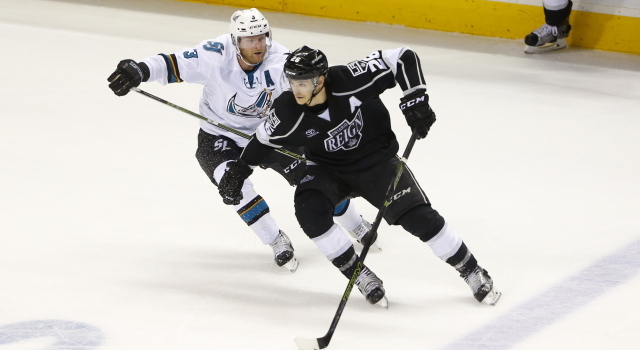 The Reign don’t spend long practice hours running through their power play. No perfecting one-timers from the circles, no dissecting penalty kills.

It’s just not head coach Mike Stothers’ style, and his reasoning is long-winded.

“Your power play refuses to shoot the puck in practice because they don’t want to hit a teammate in the foot or higher or worse, so you can’t blame them for that. And then they’ll inevitably complain that the penalty killers know what the power play guys are doing and then my response is, ‘you don’t think the opposition watches our power play and studies it so perhaps they know what we’re doing?’ Part of a power play is reading off of what the opposition gives you. You can go out there with a designed play in mind, if it’s not there, it’s not there.

“So, you’ve got to take what’s given to you. It is a very hard thing to practice and then do you do it at the start of practice when goalies haven’t even had any shots but you want to get fresh ice, or do you do it at the end of practice and then they all complain that the ice is bad and they can’t make a pass and inevitably the coach gets frustrated because either the penalty killing is outstanding or the power play is struggling or the penalty kill outworks the power play and the list goes on and on and on.

“There is no real happy medium but in preparation of the series we did work on it, we did go through it on the ice. It’s time consuming, it really is. I know there’s some coaches that they go through it all the time and I’ve seen their stats, they’re at the bottom of the statistics. I don’t know what the right answer is, I really don’t.”

It’s what Reign and Stothers are sticking with, even if their power play is scoreless in their first round matchup with the San Jose Barracuda. The Reign have gone 0-for-6 on the man advantage in all and more importantly 0-for-4 in last Saturday’s 3-2 Game 2 defeat. The best-of-5 series is tied at 1 game apiece with Game 3 coming Thursday night at 7 p.m. in Ontario.

Instead of on the ice, most of the power play work outside of games is done through video, typically a few days a week according to center Nic Dowd, who’s on the first unit. That same practice was followed a season ago when the then-Monarchs had a lethal power play that was first in the league at 20.7 percent.

“It’s expected of the players that are on the power play every game to be able to take what you learn during video and implement it on the ice,” said Dowd. “I think we have good enough players and skilled enough guys that obviously it’s something Stutts doesn’t think we need to spend time in practice working on too much and that’s fine. It’s the guys’ jobs that are on those units to be prepared.”

In the regular season the Reign finished 20th out of 30 teams with a 16.0 percent success rate — not great, not terrible, but certainly surprising for a team that finished atop the Western Conference.

Many of the Reign’s top players do pull double special-teams duties, including, but not limited to, Dowd, Michael Mersch, Vincent LoVerde and Kevin Gravel. So, Stothers’ reasoning is just in that facet and overall his faith is in his players to be creative and get the job done.

“It depends. Each week is different,” said Mersch when asked about how often the team goes through video. “I think it just comes down to execution.”

Execution is a common word used in this discussion. It’s what needs to be better if the Reign look to end their drought against the Barracuda.

“Basically it all boils down to execution and shooting,” Stothers said. “You can pass the puck around all night long, if you don’t take it to the net, you’re still going to have zeroes across the board. How about we just simplify it — pass, pass, shot. That would be good.”

“I thought about it last game,” said Mersch. “The first game if we get one on the power play it’s a 3-1 game and we’re not scrambling in the last seconds of the game.” The left wing refers to the 2-1 Game 1 win last Friday in San Jose in which his team held on in the final minutes.

So, what needs to be better?

“I think we [can] be more patient with our shot selection,” said Dowd, who has two assists in the series. “It’s one thing to say obviously you want to get shots to the net, you want to get pucks in between the hash marks and into the crease but there’s something to be said to is you’ve got to be selective and have patience out there, make plays. You’ve got one more guy so there should be someone always open.”

Playoff hockey is often defined by the successes of each team’s special teams. On the flip side in this series, the Reign’s penalty kill, which finished tops in the AHL, has continued its consistency, going a perfect 5-for-5.

Asked if he expects the power play to eventually play a deciding role in the series, Mersch responded quickly with, “Absolutely.”

It’s yet to be seen — on the ice or in video — but it’s there for the taking.