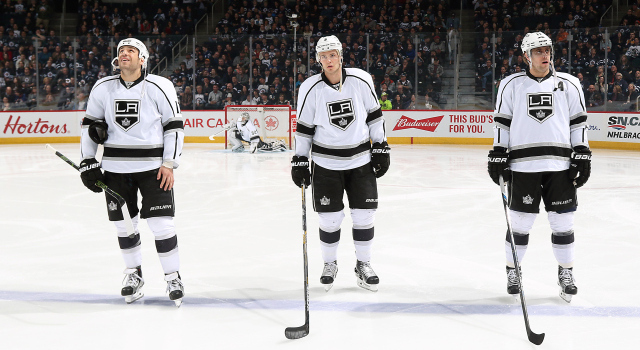 When running LA Kings Insider, Rich Hammond used to compile helpful salary charts upon the conclusion of the season as a reference point that aided in the consideration and speculation that comes in advance of the significant player movement in late June and early July. (A more visual and comprehensive depiction of the Kings’ salary commitments is available at General Fanager, while this cheat sheet helps describe protections afforded to restricted free agents, the process of qualifying RFAs, and how offer sheets work.)

Los Angeles has allocated $63.143M to 18 players for the 2016-17 season, dollar figures that include Mike Richards’ cap recapture and settlement but not the retention-affected $2.25M cap hit for Vincent Lecavalier, who has confirmed that he is retiring. Teams may have up to 23 players on the active roster, while next season’s salary cap has been projected at around $74-million, assuming the players vote to implement the 5% escalator clause. A rebounding Canadian dollar backs the $74-million cap, the projection of which may have appeared a bit rosy when presented at prior meetings amongst the Board of Governors (where Commissioner Gary Bettman had disclosed a raise in the “range” of three-million dollars) and general managers. The 2015-16 salary cap was $71.4-million, which represented a $2.4M increase from 2014-15.

*Currently under team suspension
**Has indicated he will retire; no cap recapture penalties would affect Los Angeles or Philadelphia