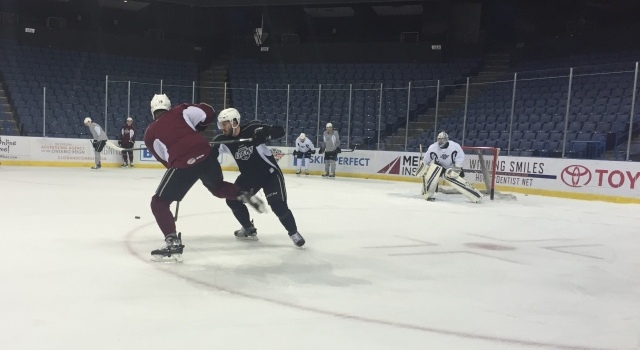 Defensive miscues have not been common for the Reign this season, but they were present in Saturday’s Game 2 loss to San Jose, a 3-2 defeat that locked the best-of-5 first round series at 1 win apiece.

A proud Reign defense that finished first in the league in average goals allowed per game (2.03) and second in shots allowed per game (25.91) and will look to shore up their back end moving into a pivotal Game 3 on Thursday at 7 p.m. in Ontario. San Jose was advantageous with their chances in Game 2 while being limited to just 15 shots on net, but the Barracuda outworked the Reign particularly on goals by Nikolay Goldobin and Bryan Lerg.

“Their kind of a chip it in and forecheck hard kind of team,” veteran blue liner Jeff Schultz said. “They have some bigger bodies that generate a lot on their cycle. They like to use the back of the net and try and find these low pass out areas so we’ve got to be sharp cutting off board-work plays and coverage in front of the net. Last game we kind of got burnt with a couple of those so it’s something that we’ve focused on this week in practice.”

Balanced scoring by San Jose has been on display as well as all four of their goals in this series have been scored by different players, Nikita Jevpalovs in Game 1 and then Ryan Carpenter, Goldobin and Lerg in Game 3.

“They’ve got three, four pretty good lines of forwards,” Derek Forbort said. “They’re pretty balanced, they’ve got good players on every line. Doesn’t matter who you’re out there against, you’ve got to be on your toes and you’ve got to be sharp against them.”

While Monday’s practice focused on ways to get traffic in front of Barracuda goalie Aaron Dell, Tuesday shifted to an emphasis of stopping the rush and defensive work as a whole.

“They had some rushes, and they score off a drive to the far post,” head coach Mike Stothers said Tuesday. “And again, it’s something you always talk about but it only takes a millisecond for you to mentally lapse and it’s in the back of your net. … We try to go through as much as we can [in practice] in whatever time frame we have between games. You try to address all the areas, whether it’s video or on the ice. So that’s basically what the theme was today.”

Goldobin’s game-winner came off a give-and-go with Jeremy Langlois where he beat Vincent LoVerde to the far post and Forbort was turned around by Lerg, who drove from the right boards for his goal in the second period.

“We definitely kind of let them get behind us a couple times and I think we’ve just got to shore that up and come out in Game 3 and really be physical with those guys and be hard to play against,” Forbort said.