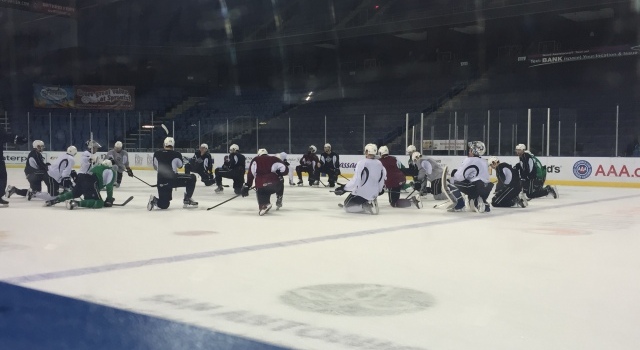 Some notes from today’s 10 a.m. practice at Citizens Business Bank Arena as the Reign move a day closer to Game 3 on Thursday at 7 p.m. against the San Jose Barracuda with their series tied 1-1.

–Mike Amadio’s debut with the Reign could be as soon as this Thursday. Centers Andrew Crescenzi and Ryan Horvat remain out with undisclosed injuries and did not practice for a second straight day on Tuesday. In their absence Amadio and Sam Herr skated with the regulars.

“They’re improving, but that’s what happens with time,” Stothers said of Crescenzi and Horvat. “Whether they have enough time or not to make it to Thursday, I’m not sure.”

It doesn’t sound good. The Reign are desperately short centermen if neither can go. There’s the possibility always that Kevin Raine can move up to forward, but the fourth line hole at center is there for the taking.

The 19-year-old Amadio concluded his Ontario Hockey League season with North Bay earlier this month and has skated with in the Reign’s regular practice for two days in a row. Amadio had 50 goals and 48 assists in 68 games this season and added 12 goals and 6 assists in 11 playoff games. If he draws into Thursday’s lineup, it would mark the AHL debut for the Kings’ 2014 draft pick who was chosen at 90th overall.

“You kind of go off of what you saw last year in exhibition and our development staff has seen enough of him this year and know what his strengths are,” Stothers said of his early assessment of Amadio. “He’s been out practicing with us. Sometimes you’re just forced into play out of necessity. So if he’s forced into play out of necessity, then we’ll see what he’s got. See what he’s made of.”

–Veteran center Brett Sutter was absent for a second straight day, raising possible questions about his availability. Sutter did watch early portions of practice from that team’s bench while in workout clothes and admitted after practice that he’s a bit dinged up.

“Just some maintenance stuff. That time of year where you get banged up a little bit, so just put a few good days of maintenance in and hopefully be good to go Thursday,” said Sutter, who’s been centering rookies Jonny Brodzinski and Adrian Kempe.

Asked if there was any concern for Game 3 and his answer was: “Hope not … Trainers are working hard and we’ll do our best to make sure I’m ready to go for Thursday.”

But Stothers countered later when asked about Sutter’s response with a: “There’s no concern. He’ll be playing. So I just took that hope not and told you he’d be playing.”

–The emphasis in practice shifted a bit to D-zone coverage and backchecking/offensive opportunities off the rush. The Reign’s defense was uncharacteristically exposed by the Barracuda in a 3-2 loss in Game 2, and Tuesday’s practice featured full ice 1-on-1s and 2-on-1s.

–Goalie Peter Budaj was given a maintenance day, so Jack Flinn was in with the regulars. Budaj practiced on Monday.