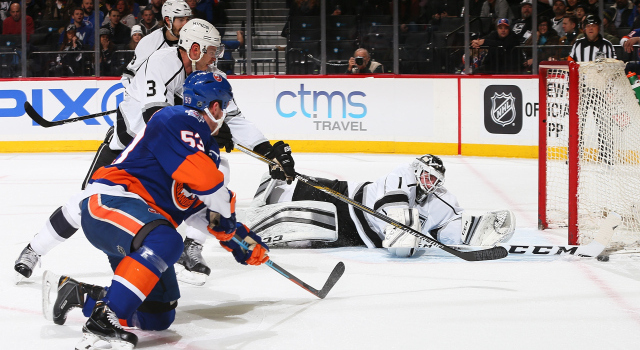 What was hinted at during the regular season received some confirmation on Sunday: Jhonas Enroth would’ve liked to play a little bit more than the 13 starts and 856 minutes he earned in 2015-16.

Consider this quote from February 10, which came shortly before his increased usage during the club’s final eastern swing of the season:

Enroth, on how he’d evaluate his own performance this season:
I think all of my games have been very solid, even the games where I gave up a couple of goals, they were pretty solid too, and I’ve been feeling good the whole year. I wish I played more games, but I guess this is the way they do it here, so I’m just going to have to stay ready and do my best when I get my chance.

When he met with the media on April 24, he spoke of team-wide disappointment that the team embarked on just a five-game postseason run while also speaking on behalf of the playing time that was hard to come by, partly because Jonathan Quick was very good.

“I was a little bit disappointed that we got eliminated that quickly. I was planning on being here for a little bit longer than that,” Enroth said. “But I think overall, it was a pretty solid season from the team and from myself. Like you said, I wish I had played more games, but I don’t really feel like they gave me a lot of opportunities to play, but that’s the way they like to do it here, so I kind of knew what I was signing up for.”

Those comments don’t exactly instill confidence that Enroth, who put up quality numbers for a back-up in limited action and is due for unrestricted free agency, will return in 2016-17, despite the team’s reduced options in net. In 16 total games, the Stockholm native went 7-5-1 with two shutouts, a 2.17 goals-against average and .922 save percentage. Earlier this year, the team signed Peter Budaj, who has 297 career NHL appearances and established himself as the American Hockey League’s top workhorse with AHL-Ontario, to a one-year extension.

The back-up role to Jonathan Quick is a difficult position for a goaltender, especially one who joins the team from outside of being drafted and developed by the club and sits for wide swaths of the season. In less action that Enroth received, Martin Jones logged only 775 minutes in 2014-15 (and, for what it’s worth, put up numbers a touch below the numbers Enroth posted), and ultimately never came to terms with the team before he was included in the Milan Lucic trade and subsequently traded back west to San Jose.

But Enroth, as opposed to Jones, or to Jonathan Bernier, was not a young goaltender who had simply outgrown his restricted free agency years. There were few ties to the organization when he signed a one-year, $1.25-million contract on July 1, 2015. The Kings were interested, may have swung and missed at their top free agent back-up goaltender target, and signed a player who had limited experience as an NHL starter and greater experience as a back-up to Ryan Miller in Buffalo, where he had admitted to having to learn how to deal on a day-to-day and practice-to-practice basis with serving as an NHL back-up during an earlier time in his career.

Enroth was never really treated with any kid gloves after he made his debut in a 4-1 at San Jose on October 22. He won two road games against the Sharks, shut out the Blues at the Scottrade Center, earned a key late-season win at Dallas and faced the New York Islanders twice amongst his 13 total starts. It’s not as if the majority of his starts were against the Oilers on the second night of back-to-backs.

He spoke only two days removed from the playoff exit, so it may not have been the right time to start thinking about his future. But he did say that his hope and expectation for next year is to be “just be a bigger part of a team, I guess, trying to play more games.”

Despite the team’s well-established reliance on Quick, Enroth still hoped for a wider load than the one he was able to chisel out.

“At the same time, I really thought they were going to play me more,” he said. “I mean, if you sign a guy for 1.2-million dollars, you’re not going to play him 13 games, in my opinion. You should play him 20 or 25. I thought I earned more games, obviously. I played pretty solid in the games I got, but a lot of breaks in between games, too. It’s tough to get a groove going, but I think I had a pretty solid season.”

The numbers he posted weren’t spectacular, and despite the wider body of work that he undertook when compared to Jones the year prior, it wasn’t as if he was earning additional starts by outplaying his counterpart (nor should that be expected, given Quick’s standout play and contract entrenchment).

But Enroth has been well-liked where he has played, and just as he did during his time in Buffalo – that Buffalo Bills hat was spotted on occasion around the Kings’ facility – he’ll end the year not in the heat of a playoff battle, as expected, but by immersing himself in the myriad of cultural and tourism options at his disposal before the lease on his apartment ends at the end of May.

“I’m definitely going to check out Universal,” he said. “I haven’t been there yet. And just, I guess, be a tourist. I haven’t done it too much, actually. Just check out L.A. a little bit more and try to enjoy the weather. Hopefully it’ll start to get a little bit warmer now.”