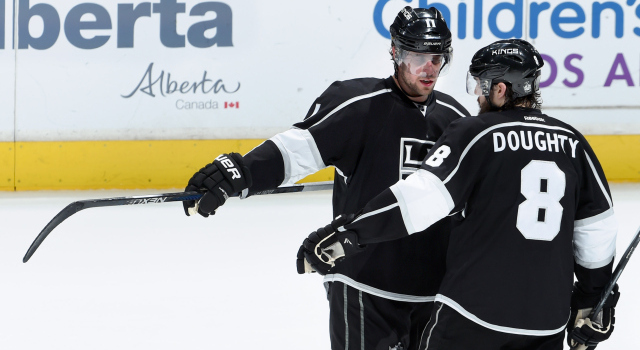 Roughly 36 hours after their season ended, several key contributors from the 2015-16 Los Angeles Kings stepped one-by-one into an empty auxiliary dressing room, save for an unused podium, a dozen or so assembled chairs and roughly half as many reporters. It was the dressing room where in years past, they spoke with conviction about details surrounding an acute playoff focus that twice in three seasons led them to a championship, to parades, to television appearances and a growing reach of hockey throughout the Southland.

On Sunday, though, those larger themes had been scaled back. It was an awkward time, with the season’s abrupt ending so vivid in their minds, and exit meetings not yet having begun in earnest. There were raw feelings, and for those who had been the flagbearers and letter-wearers of an accomplished team, the pain was still fresh.

“We definitely had other plans in mind, but they didn’t happen obviously,” Anze Kopitar said. “We got eliminated, and we’ve got to live with this now. It’s going to be a longer summer again, and now it’s just time to kind of exhale and look back and see what everybody can do better and come back next year ready to go again.”

Because of the broken ankle that felled him prior to the 2011 playoff series against San Jose, this was Kopitar’s earliest playoff exit since his first go-around in 2010. And in a year that opened flush with narratives such as “redemption” following the team’s inability to qualify for the playoffs in 2015, it ends with a more disappointing outlook after the team amassed a franchise-record 48 regular season wins, followed by only one postseason victory.

“It doesn’t matter if you have a long summer, a short summer – it doesn’t matter,” Kopitar said. “It’s always frustrating when you go out before the playoffs are done. We’ve been there before, so anything less than that is disappointing, and I think that’s what makes our team so resilient, and this shows the character that the team has, that anything less than winning is disappointing, and we don’t want to do anything else. It doesn’t matter if it’s a long summer or a short summer. It only comes down to winning or not.”

Kopitar had four points in five playoff games and scored off a shin pad deflection to breathe life into Los Angeles’ second period rally in Game 5 but was not amongst the biggest difference-makers in the series. Those players would be Joe Pavelski, Brent Burns and Joe Thornton – and even key role players such as Joonas Donskoi – who helped a San Jose team that entered the series as underdogs reach the second round.

Drew Doughty had his moments in the series but was not at his absolute best, and his average ice time of 30:49 per game may have diluted the quality of his play. But with a depleted blue line that during the regular season had replaced minutes vacated by Robyn Regehr and Matt Greene (and, in the past, Slava Voynov and Willie Mitchell) with minutes from Brayden McNabb, Luke Schenn and Rob Scuderi, the Game 1 loss of Alec Martinez, who had emerged in the regular season as an all-situational defender who also eats up minutes on the right side, was not adequately filled against a team that found success in using speed as an asset against a team without the services of one of its finest skaters.

“We weren’t the team that we needed to be in playoffs, there’s no doubt about that,” Doughty said. “We can use all the excuses we want, but it came down to we just didn’t perform in playoffs well enough, and that’s the bottom line. San Jose – I don’t want to say they were hungrier or more determined to win, but they definitely played better than us, there’s no doubt about that. So it’s disappointing.”

That the team was in its championship window – and it still will be, with the Holy Trinity of Doughty, Kopitar and Jonathan Quick forming virtually as supreme of a core as exists in the NHL – and lost prematurely exacerbates the sting that won’t be washed away easily by time.

“It’s pretty frustrating,” Doughty said. “I think we have maybe had one of the best teams we’ve had on paper this year. Dean put a lot of the right players in place, and obviously guys got hurt and stuff like that, and maybe the season didn’t go exactly how we wanted that way, but it’s frustrating knowing how good our team is and could’ve been, and we just didn’t perform in that series. It was frustrating losing to those guys, and it’s frustrating watching hockey right now and knowing we’re not playing because I do know how good our team is.”

Despite the changing personnel and the evolved circumstances, Kopitar didn’t think that there were variables missing from this Kings team that had been present in others.

“No, I don’t think so,” he said. “Teams in this league are pretty good. You can’t just think that you’re going to come in and just roll over everybody. I think San Jose was a good example. They just flat out played better hockey than we did, and they got timely goals on their power play, and we really weren’t as sharp as we wanted to be on the penalty kill and on the power play. That’s what usually makes a difference.”

Anze Kopitar, on Vincent Lecavalier:
I think he proved that to everybody that he wasn’t just going to let the year go by and sit out with nothing to give. I think he obviously came here and gave us that everything we kind of expected, and everything we asked for. He’s been a great addition at the deadline for us. I think we made his stay around here pretty comfortable, too, and he seemed like he enjoyed it. That’s obviously great for him. Again, too bad we didn’t do the run that we wanted to, but I still think that he enjoyed his time here.

Kopitar, on his expectations of Milan Lucic, and whether he exceeded them:
I don’t think there’s too much of a secret to his game and his personality. It’s very open and emotional, and there’s no BS with him. He’ll give it, and he’ll take it, so that’s just what it is. Obviously [he’s] a very physical guy and put some points on the board, so I think, yes, he’s lived up to his expectations.

Drew Doughty, on business side of hockey and player movement:
Yeah, I’m sure guys are going to get signed, I’m sure some guys probably aren’t going to stick around, and that’s just the business of hockey. It’s sad to see guys go, but that’s just how it is. It’s unfortunate, but I don’t really care to follow that side of the stuff. Whatever happens happens, and hopefully we can have most of them stay, and if not, then obviously you’ve got to say good bye.

Doughty, on Logan Couture’s comments after the end of the Kings-Sharks series:
I debated saying something, but I don’t know, whatever. He can say whatever he wants. It really doesn’t affect us or anything like that. Whatever. I don’t even know what to say about that.

Doughty, on whether he’ll “settle” the debate with Couture “on the golf course”:
To be honest, everyone talks about this buddy thing, but we really aren’t that close. We really aren’t. We basically work out at the same gym. That’s about it. It’s kind of been a thing that was made bigger because we played together when we were younger.