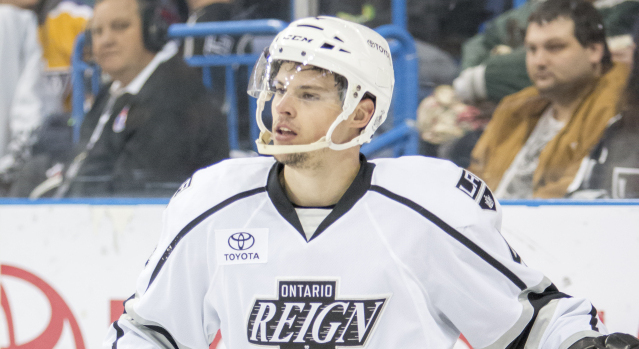 [Update: The Kings officially reassigned Gravel to the Reign at 2 p.m. PT]

The Reign will have the services of Kevin Gravel for Game 2 of their first round playoff series against the San Jose Barracuda on Saturday.

Ontario leads the best-of-5 series 1-0 after a 2-1 opening win Friday night in San Jose. Gravel had been on recall with the Los Angeles Kings, who were eliminated from the playoffs Friday night, making it possible for the Reign’s top-4 defenseman to eventually be officially reassigned sometime Saturday. Head coach Mike Stothers said early Saturday morning via text that Gravel was “supposed to be joining us today in time to play tonight,” and followed up later saying “Gravel is in the locker room. I just spoke with him. He will play for us tonight.” Game 2 is at 7:30 p.m. PT at SAP Center.

Gravel was a healthy scratch in four playoff games with the Kings after joining the team on April 15. He was absent in the Reign’s Game 1 against San Jose plus the team’s final two regular season games. Gravel was called up after an injured Alec Martinez left Game 1 on April 14 and could not play the rest of the series against the Sharks, who won the series four games to one Friday in a 6-3 victory at Staples Center. It was reported first by Lisa Dillman of the Los Angeles Times on Friday night that Martinez had a groin injury.

Gravel will most likely slot back beside usual defensive partner Derek Forbort, which means Kevin Raine should be scratched after playing Friday.

Gravel, a 5th-round pick by the Kings in 2010, ranked second among Reign defensemen in scoring with 7 goals and 13 assists for 20 points in 55 regular season games.