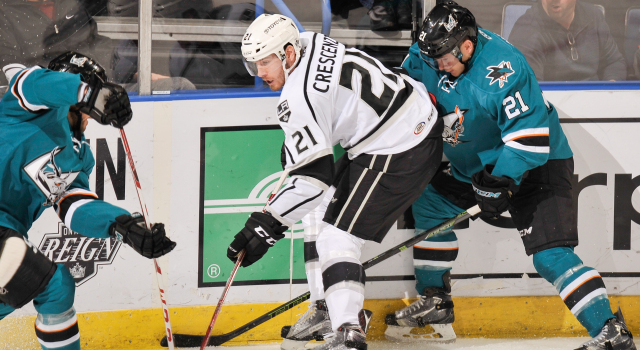 –Andrew Crescenzi left the game midway through the first period and did not return.

–Ryan Carpenter opens the scoring in the second period as he’s credited with a tip of a Joakim Ryan shot after Reign defenseman Kurtis MacDermid gives the puck away on breakout (goal was originally credited to Scott Timmins):

–Barracuda captain Bryan Lerg powers around Derek Forbort along the right wall and drives to the net to beat Peter Budaj:

The Captain powers his way to a goal. #SJBarracuda pic.twitter.com/mrj7rBf9mR

–MacDermid scores his second of the postseason to cut San Jose’s lead to 2-1 early in the third period off a pass from Joel Lowry to give the Reign some life:

–Nikolay Goldobin gets San Jose’s two-goal lead back by finishing a nice feed from Ryan:

–Brodzinski scores with just over 30 seconds left in regulation with Budaj pulled on a backhanded pass from Nic Dowd:

Comes in a losing effort, but what a pass from Dowd to Brodzinski…Barracuda 3 @ontarioreign 2 pic.twitter.com/XWwLNfd0Rg

–Dell has two assists in the series and finished with 34 saves.

–Mersch, Brodzinski and Samuels-Thomas each had five shots on goal. San Jose as a team finished with 15.

–Rookies Brodzinski and MacDermid are the only Reign goal scorers in this series, each scoring in Games 1 and 2. San Jose’s Ryan assisted on all three goals and leads the series with three points.

–Kevin Gravel played in his first Reign game since April 2 and earned an assist on Brodzinski’s late third period goal. Gravel was reassigned to Ontario from the Los Angeles Kings on Saturday.

–Games 3 and 4 will be played in Ontario next week on Thursday and Friday at 7 p.m.