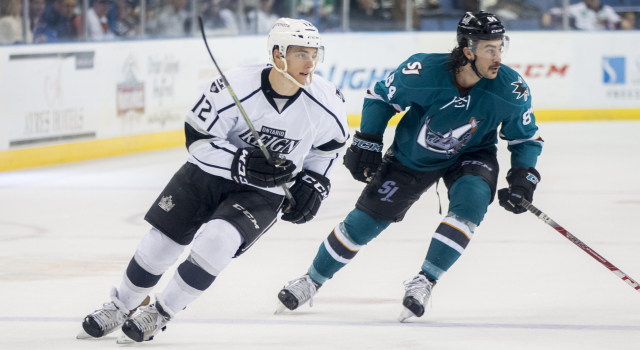 Reign game breakdown
Welcome to the playoffs and a special welcome to the Reign’s rookies. In Game 1 of the Calder Cup Playoffs in the Reign’s first round matchup against San Jose the rookies reigned supreme, carrying the scoring load as Ontario took the opener 2-1 on Friday night at SAP Center. Jonny Brodzinski, who head coach Mike Stothers said could be a “bonus” for this team in the postseason, proved him right in Game 1, scoring the game-winner at 15:57 of the third period. The rookie out of Blaine, Minn., was unattended in the slot when an aggressive forecheck by linemates Adrian Kempe and Brett Sutter confused the Barracuda as they gave it away in the left corner. Sutter quickly moved the puck to Brodzinski who patiently deked to his backhand, catching goalie Aaron Dell out of position to put the puck into a wide open net. Another rookie, defenseman Kurtis MacDermid, scored the game’s first goal on a blast from the top of the blue line at 9:53 of the second period. A clean faceoff win by Nic Dowd against counterpart John McCarthy left the puck sliding into MacDermid’s wheelhouse, and with Michael Mersch providing his usual uncomfortable presence in front, MacDermid beat Dell. San Jose tied the game at 1 on a slick finish of a 2-on-1 early in the third period. A long shot went off Dell’s blocker and the rebound caught the Reign defense as Nikita Jevpalovs and Bryan Lerg raced out of their own zone in on the odd-man rush against Kevin Raine. Jevpalovs, coming down the right wing, used a pull-drag move on Raine to create space, opted to shoot and beat Reign goalie Peter Budaj at the 6:17 mark. That set the stage for the rookie heroics for Brodzinski and behind Budaj’s 28 saves the Reign held on for the win.

Three stars
–Jonny Brodzinski – Brodzinski has found comfort in playing with Sutter the last few weeks and he’s certainly never minded playing with roommate Kempe. Previously Brodzinski and Sutter were with Mersch, but Kempe’s addition to this reliable line allowed Kempe to have his “best game in a while,” according to Stothers. Brodzinski said near the conclusion of the regular season that he’s “a lot more confident coming into the playoffs now.” It showed. He finished with a game-high 5 shots on goal and the game-winner was his second in the last four games.
–Kurtis MacDermid – Known for his intimidating play rather than his scoring, the 6-foot-5 defenseman had four goals in 56 regular season games. Make it 1 for 1 in the postseason. Slotted beside usual partner Vincent LoVerde, MacDermid and his opportunistic shot gave the Reign the lead and played a heavy part in the series lead as well. Ontario is lethal when leading and entered the playoffs with a 31-2-1-0 record when scoring first.
–Peter Budaj – One of biggest matchups in this series is going to be the one between the pipes. Budaj’s the league’s best goaltender — by far as exhibited by his 1.75 goals against average, his 42 wins and his .932 save percentage — but Dell is no slouch, particularly against the Reign. In the regular season Dell had a GAA of 1.84 against Ontario and .944 save percentage. The veteran Budaj outplayed him by a slim margin, but as has been the case nearly all season long, “Budaj was Budaj,” Stothers said after the game. He wasn’t overly tested in the third, seeing just 6 shots, but he was in the first. He was a calming presence in the opening period where he stopped all 12 shots, most of them coming in the later parts of the 20 minutes. As noted by the AHL Saturday morning, the win was Budaj’s first playoff victory in his 14-year pro career.

Turning point
Ontario convincingly killed a MacDermid tripping penalty just over the midway mark in the third period and used that momentum, with Brodzinski’s go-ahead goal coming less than two minutes after.

Stat fact
–4-for-4 – Perfection on the penalty kill was key for Ontario, which at least two times forced a frustrated San Jose power play unit to ice the puck on their own man advantages. Ontario’s AHL-leading kill came into the playoffs at 88.7 percent effectiveness. Said Dowd earlier this week: “I think special teams is going to be huge. You see that in a lot of rounds of the playoffs. You see it at the next level, too.”

This and that off-ice
Shortly after the Reign won, the Kings lost on home ice to the Sharks 6-3 in Game 5 of their Stanley Cup playoff series, concluding their season in a 4-1 series loss. The silver lining? Ontario will soon get top blue liner Kevin Gravel back in the lineup, possibly as soon as Saturday.

Next up
Game 2 of this best-of-5 is Saturday night at SAP Center as the Reign have the chance to take a stranglehold of the series before it shifts to Ontario next Thursday.