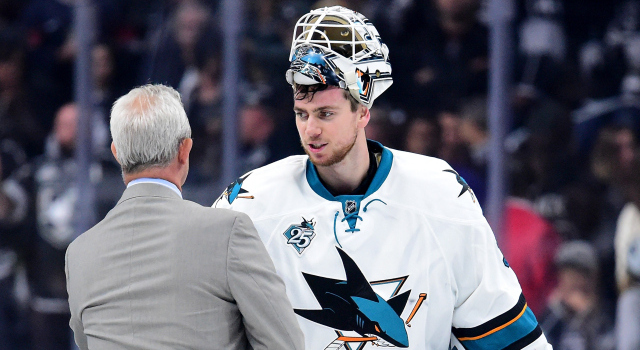 On the Game 5 turning point:
I don’t think it turned. I think the fourth goal was really similar to a lot of goals they scored in the series where they really got our defense back. Their speed was a factor, and they took advantage of it.

On the loss of Alec Martinez:
It was huge. It was down the stretch, too, if you look at it. You can’t use injuries as an excuse, but when you’re really evenly matched, when you look at it, they get Vlasic back, we lose Marty. It’s like losing the top end of your defense.

On whether he’ll return to coach the Kings in 2016-17:
You asked that a couple months ago, and I think I publicly gave my answer to that.

On when he looks at personnel and the makeup of the team:
I haven’t given that much thought yet. Our goal going into the season was obviously making the playoffs as quick as you could, and we did that, and we did it in pretty good fashion, and then our thing was to get to 100 points and then start again. When you get to that point, you want to have your full lineup, and hopefully you can extend a series out. So, you know what? That’s something you’ve got to look at. You’re not thinking about that yet. That’s something that you sit down as a group about.

On the core of the team:
Well, look at our great players tonight. Look at how Kopi and Drew played. Quick and Drew and Kopi. We had some guys who had tough series, but you’ve got a great core, that’s for sure.

On any concerns or ominous signs that developed late in the season:
No, that’s not quite the right way to say it. … I think that there were some injuries, and there were some guys that we were trying to pull back a little bit to give them this time to be ready. As I said, the regular season part, when you look at everything, and losing some guys during the year, when you think about it – King and Gabby and Greener – guys that we really had, and putting new guys in, I thought our team did an awesome job, quite honest.

On what Vincent Lecavalier brought to the team:
I’ve probably answered that same question a hundred times the same way. I think he brought character and I think he was a really good role model for some of our younger players. He’s a champion. He was a pleasure to coach.

On whether he’d want Milan Lucic to return, if Dean Lombardi asks him:
You’re asking questions that head coaches in the National Hockey League don’t answer. [Reporter: Would you want him back, though?] Ask me a question a head coach in the National Hockey League would answer. Actually, it’s a dumb question, when you think about it. Why wouldn’t I want Milan Lucic back? I mean, if you were playing with him, he’d probably protect you. It’s a dumb question, jeez.

On whether San Jose has the ingredients to make a Stanley Cup run:
If they’re healthy – you know what? They’re set. They look really good. They’ve got the good depth down the middle, they have good speed, and that six on defense is as good as you’re going to put together right now. They’ve got two goalies that are competing against each other that are really good, so I wish ‘em luck.