“Desperation,” “execution” topics prior to Game 5 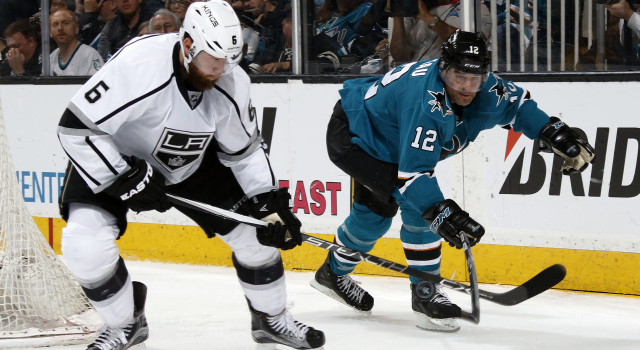 The Los Angeles Kings’ string of seven consecutive wins when facing elimination will be put to the test tonight when they take the ice against the San Jose Sharks, who currently hold a three-games-to-one lead in their best-of-seven series.

“We’ve got to play desperate,” Anze Kopitar said. “We haven’t played desperate enough in this series yet and now we have to so there’s no other choice. We’ve got to make sure, again, that we’re ready.”

That desperation appeared to seep into their game in the third period in Game 4 after they had dug a three-nothing hole following three San Jose power play strikes. From that point on, Los Angeles tilted the ice towards Martin Jones by scoring twice in the third period and adding pressure that nearly resulted in a late-game equalizer.

Darryl Sutter said earlier today that he didn’t take much out of the third period – score effects likely influenced that account as the Sharks defended a three-goal lead – but that similar type of push will need to be replicated in a series in which the Kings haven’t created the consistent intersection of pucks and bodies at the front of the goalmouth.

What will help the team tonight will be the ability to play with the lead. Since the start of the series, the Kings have led for all of four minutes and two seconds of ice time – the amount of time that elapsed between Jake Muzzin’s early first period goal and Joe Pavelski’s equalizer in Game 1. Since those moments, the teams have been tied for 116:58, and the Sharks have led for 122:17.

“It certainly wouldn’t hurt us,” Anze Kopitar said about scoring the first goal. “You hear it all the time, getting ready, get off to a good start and go from there. Stay out of the box, make sure that power play gives you momentums. Those are all clichés, but you’ve got to do them.”

More from Los Angeles’ dressing room on the desperation heading into tonight’s game:

Rob Scuderi, on using confidence from past experience to get back into a series:
I think that’s one of biggest things experience gives you is having to go through things before. Whether they turn out positive or negative, you try to learn from them. All we’re trying to do right now is get one. I think guys who have been in this room, whether it be on this team or other teams and been down in a series before, we just try to get one and get it back to San Jose. But it starts with small things, it’s certainly a cliché but it starts one tiny thing at a time. Right now it’s the start of the game and then each shift after that.

Drew Doughty, on being able to draw for past experience being down in a series:
This is a new series, new game, but having the experience of being down in a series before, that definitely can help. There’s some guys in here that haven’t played too many playoff games. The guys that have experience can use some of their knowledge on those guys. We’ve been in this position before. Obviously it’s not where we want to be, but we’ve got to make the best use of it now and win the next three games and it starts with winning one on home ice.

Doughty, on the chatter on the topic amongst the players:
In the morning and stuff everyone knows, we really don’t say much about it but definitely [will] be addressed before the game, the coaches will address it, the leaders will address it. Everyone knows the situation we’re in, it’s a must-win game, our backs against the walls and we’re going to have to see the best from every single player on our team in order to win tonight.

Doughty, on getting traffic in Jones in Game 4 and taking that into account tonight:
I think last game’s in the past now. Obviously we’re going to see how we got those pucks by him and that was with traffic and shots to the net. We’ve been trying to do that all series and then haven’t been too successful with it until that third period of last game. We know that is the way to score on him. He’s a good goalie and we haven’t got to him yet and it’s about time we get to him.