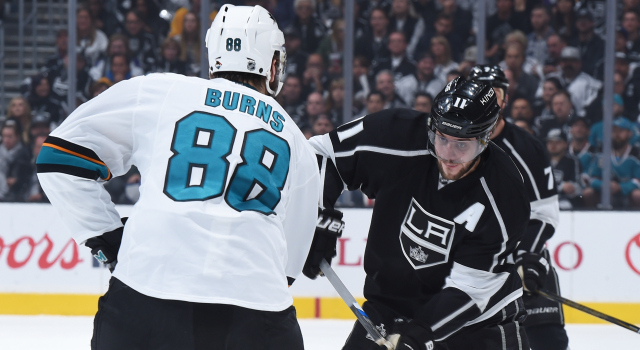 Anze Kopitar, on getting back in the game only to lose in the third:
Down three-nothing and then make it 3-3 going into the third, you certainly think that you can do it obviously, and just didn’t get it done.

Kopitar, on how much it hurt having top defensemen out of the lineup:
Certainly when you lose guys or the guys get injured it’s a hole that somebody’s got to fill and I don’t think that was the case. Certainly we miss those guys but somebody’s got to step in and just fill in and I don’t think we, this series, we didn’t play good enough and the bottom line is it showed the scoreboard and we didn’t deserve to win the series.

Kopitar, on if Vincent Lecavalier is capable of playing another season:
I think so. The way he played — I don’t know how many games he played with us — but I certainly think he can still kick around.

Dustin Brown, on if the Sharks had redemption on their minds after 2014:
You’d have to ask them that. Every year is a new year, so, it’s why we play the games. Things change and they outplayed us this series.

Brown, on if the difference in the series will always be the starts:
It can. They scored on their first or second shot in the four games they won, probably. We were chasing every game. It’s hard to chase the game this time of year.

Milan Lucic, on if he wants to come back to LA:
Yeah, for sure. I definitely hope it’s not my last game as a King. Aside from today and this series, it was a lot of fun being an King and I really enjoyed everything about this organization from the management to the coaches to the players to the fans, to the way everyone’s treated here. It’s definitely first class, so, hopefully we can get something done here before July 1st so I can remain a King and I’m definitely hopeful and positive that I will be here more than just one year.

Lucic, on the difference in the series:
We never came to the dressing room after a period with a lead and we weren’t able to establish the lead and play with it for the whole series, and we were always playing from behind. Plain and simple we weren’t hard enough on their top guys, on their D, or on their goaltender, and we weren’t committed to the little things that it takes to win a playoff series. They blocked more shots than us, beared down on their opportunities more than we did, and that’s why we came out on the losing end of things.

Lucic, on Joe Pavelski’s dominance:
We weren’t hard enough on their top guys and it ended up costing us. He beared down on his chances. That’s why he’s scored back-to-back basically 40 goals. He led the way for them and that’s why they’re moving on.

Trevor Lewis, on the Sharks’ forecheck in the series:
It was big. Felt like sometimes when we get the puck coming out we just had to chip it and they’d be coming back at us. They were good.

Lewis, on being an unrestricted free agent:
I love this place. I grew up here and we’ll see what happens.